A to Z of Honey Bees
And Beekeeping: Q-T

Queen cell
Queen cells are larger than other cells, and contain a larvae destined to become a queen.  Queen larvae are fed royal jelly.

The practice of painting a brightly coloured dot with bee paint, on the queen honey bee, in order that she can more easily be identified by the beekeeper when inspecting the colony.

Robbing
Taking of honey from a hive by other insects, including wasps and bees not belonging to the colony.  In one sense, beekeepers may also be referred to as ‘robbing the bees’.

Sac brood
Viral disease that causes larvae to die before their final moult.

Skep
A wicker or straw basket that used to be used for housing bees, and is sometimes used by beekeepers when collecting swarms.

Small hive beetle - Aethina tumida
A serious and notifiable pest originating in Africa.  They can infest and decimate a colony, where it eats brood, honey, pollen, and destroys combs.

Smoker
Apparatus used to puff smoke into a hive to calm the bees.  It is meant to encourage the bees in the hive to feed and become more docile.  Too much smoke, however, can panic the hive and make them angry. Read more about  the smoker.

Sugar syrup
A solution of sugar and water used to feed bees at certain times.  For recipes and information about feeding bees, go to Feeding Honey Bees.

Super
Upper chambers where the honey is stored.

Supersedure
The bees’ method of replacing their queen, without the need for swarming.

Sting
The sting is actually a modified ovipositor, and can be used for laying eggs.  Only the honey bee queen and workers have a sting, but not the drones.  Unlike bumblebees, honey bees are unable to sting repeatedly, and will die following a stinging event.  Read more about bee stings. 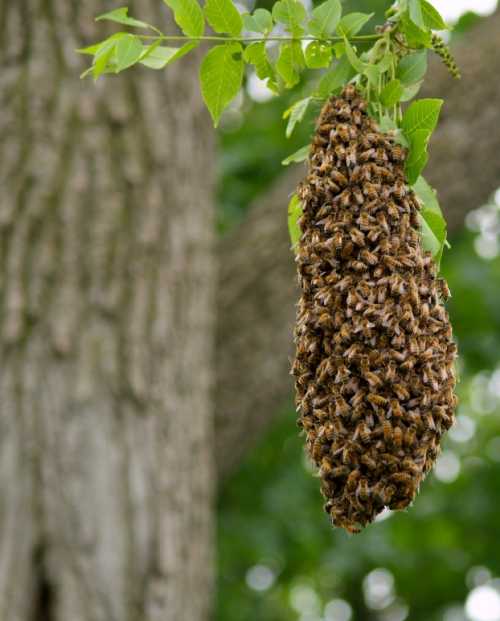 Swarm
A mass of bees that has left the hive, as the bees attempt to split the colony, and find a new home. Watch these beekeeping videos for tips on swarm catching.

Thorax
The upper body of the bee.

Top Bar Beehives
Top bar hives provide a bar from which bees build their own comb, with restrictions imposed by supers used in other hives, such as the Langstroth.   See these top bar hive construction plans.

The act of communicating through feeding.  Bees achieve this by passing transmitting a pheromone through the colony whilst they feed each other.