In the US, Hyleaus are commonly called 'Yellow-faced bees', in the UK they are known as 'Yellow-face bees', whilst in Australia, an alternative name is 'Masked bees'.

Hyleaus are small, fascinating bees belonging to the bee family Colletidae.  Not surprisingly, they have distinct white or yellow markings on their faces. 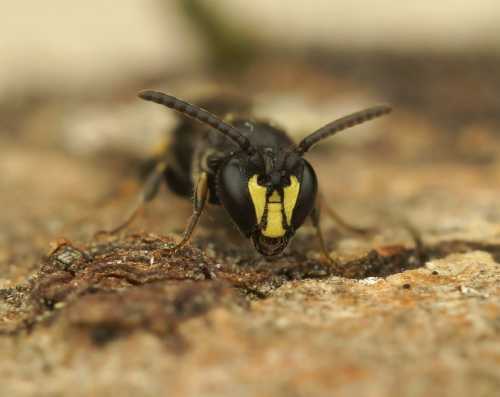 With distinctive white or yellow markings on the face, these small, beautiful bees may be relatively easy to identify, although Falk1 notes the facial markings of some species may not always be clear in females.

Yellow-face bees are small, slender and 3.5 - 6mm in length1. Their bodies are dark and relatively hairless.

Hylaeus select nest sites in hollow twigs and stems, holes in wood, and sometimes bee hotels. They will sometimes select crevices and holes in rocks and walls. Having dainty mandibles (jaws) they are unable to excavate their own nest holes, and so they opt for pre-existing holes2.

Hylaeus use their tongues to line their nests with a cellophane or silk-like substance, which provides protection from bacteria and is waterproof.  Remarkably, this silk-like substance is so strong, it does not dissolve when infused with strong chemical solvents, and does not melt when heated2.

Watch this amazing video footage below of the life cycle of a Hylaeus communis (Common Yellow-face Bee) as she mates, forages for food, creates the silky lining for her nest cells, and the larvae develop into adult bees inside the silk-lined cells.

Hylaeus can be found in a range of habitats, from urban gardens to forest edges, coastal regions and brownfield sites.

What Do Yellow-faced Bees Eat?
Foraging Habits And Preferences

Wilson and Messenger Carril note that female Hyleaus species are unique in having no hairs or scopa for carrying pollen.  Instead, yellow-faced bees consume the nectar and pollen they find in flowers, store it in their crops, and regurgitate it back at the nest2 to provide food for emerging offspring.

It appears most species are generalists, and have been observed to visit a wide array of flowers, including brambles, Field Scabious, Wild carrot, thistles, Yarrow, roses and Oxeye Daisy.

In Australia, some Masked bee species may visit flowers from only one plant family, and in other regions, species only visiting flowers from the rose family have been noted2.

Hylaeus species have been observed to engage in 'pollen robbery', whereby pollen reward is accessed and removed from the flower by the bee, without pollinating the flower.  Bees were noted to achieve this by biting into the closed flowers to access the pollen, before the flower opened out and exposed the pollen naturally4.

Which Hawaiian yellow-faced bees are protected?
In 2016, seven species received federal protection under the Endangered Species Act of 19733, including:

Here is a short video: The Hawaiian Yellow-Faced Bee Project

Yellow-face Bees found in the UK

As I write, according to Falk1 the 12 UK species include: 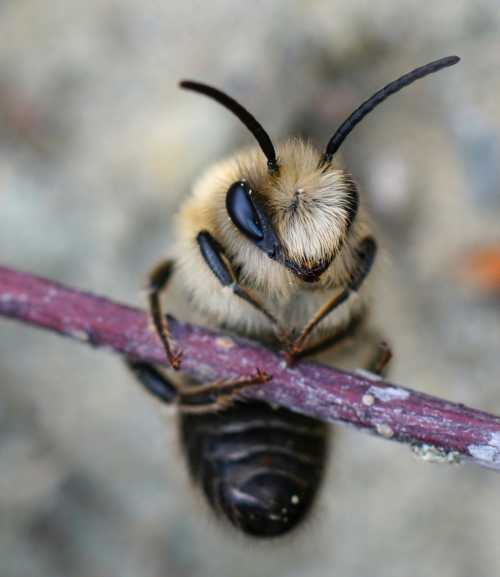