A to Z of Honey Bees
And Beekeeping: K-P

(Please note, this is a work in progress)

Kashmir Virus
Affects brood and adult bees. Believed to have originated in Southeast Asia and India.  KBV can be spread between worker bees, from the queen to offspring, and from mites, notably Varroa.

Landing board
Used by some beekeepers, and enables beekeepers to see what bees are removing from or bringing to the hive.

Considered the "Father of American Beekeeping."  Langstroth was sometimes credited with discovering the "bee space," though this discovery had already been implemented in European hives.  He received a patent in America for the first removable frame hive, and advocated other methods of increasing production from honey bees.  However, a Russian (actually Ukranian) Petro Prokopovych (1775–1850) beekeeper, had already invented a moveable frame.

Langstroth contributed in a major way to the industrialization of modern beekeeping.

A type of hive very common in America.   Read more about different types of bee hive.

Mead
A drink made with honey, water, leman, vitamin C and wine yeast.  It requires a year to mature. Read about mead.

Mouseguard
A grid which allows bees in and out of a bee hive, whilst keeping mice out – especially in winter. 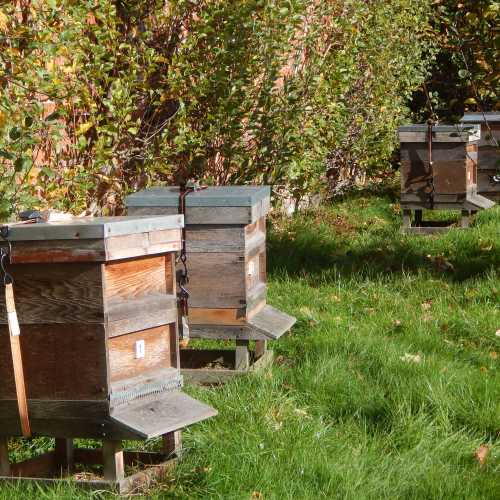 Widely used in Britain, this is a single, square-walled hive.

A gland used to secrete a substance which attracts bees back to the hive.  It is present on the abdomen of worker bees.

The sweet substance produced by flowers that attracts pollinators to feed.  Nectar is converted into honey by honey bees.

Nosema
A disease caused by Nosema apis which affects the gut of adult bees.  About nosema.

Nuc / Nucleus
A box with 4 or more frames of brood, some honey, a queen, some workers – this is how honey bees are usually bought.  Read more about the nuc here.  Or visit the page buying honey bees.


Nurse bees
A worker honey bee that occupies the role of rearing brood in the honey bee colony. 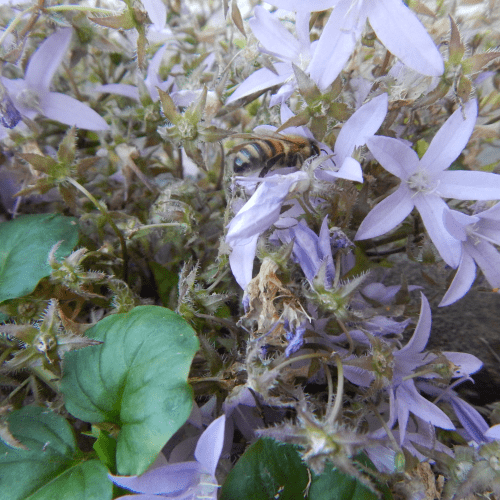 OMF – Open Mesh Floor
A fine mesh floor, used to help control Varroa mites.  The mites fall through the mesh, but are unable to return to the hive.

Pheromones
A chemical emitted by bees for communication.  It triggers a social response among other bees in the colony.

Pollen
Is a substance produced by the anthers of seed-bearing plants, consisting of numerous fine pollen grains containing male gametes (i.e. germ cells that fuse with other cells during fertilization), which occurs during the plant pollination process.

In other words, pollen carries the cells which enable fertilization of plants, so that plants may reproduce.  Read more:  what is pollen?

Pollination
The method of sexual reproduction in plants.  Read about pollination.

Pollen baskets – Corbicula
Located on the hind leg of the bee, in which pollen is transported back to the hive.

Prokopovych, Petro (1775–1850)
The founder of ‘rational beekeeping’.  A Ukranian (Ukrain was then part of the Russian Empire) beekeeper and researcher who published 60 papers on his methods and findings on beekeeping.  He invented the movable frame, and the discovery of the shaking method of dealing with Foulbrood is attributed to Prokopovych.

Propolis
This is collected from bark and buds of trees, and used by bees to glue things together and block up holes in the hive.  It is also known as ‘bee glue’ or ‘bee gum’.

Pyrethroid insecticide treatment
Was used as a treatment by some beekeepers for controlling Varroa mite, although some beekeepers prefer natural treatments and method.  However, the mites built up resistance to the pyrethroid treatment.  About Varroa.