Some bees have wonderful names – like the hairy-footed flower bee (Anthophora plumipes), for instance.

During my talks, I sometimes play a little game where I ask questions, and if a member of the audience answers the question correctly, they get a packet of wildflower seeds as a prize.

One of my questions is: Which of these names does NOT belong to a real species of bee?:

Lots of people choose the first one, presumably because they think that hairy-footed flower bee, is too fanciful a name (the correct answer is ‘the black-kneed bee' – a name I invented).

About The Hairy-Footed Flower Bee

This species is one of the earliest to appear in my garden, as it is attracted to the flowering Pulmonaria.  At first glance, both males and females of the species can easily be mistaken for a small bumble bee.

Anthophora plumipes is technically a solitary species, although where favourable nesting conditions exist, they may be found nesting in aggregations.  Nest occur in soft mortar or sometimes in the ground.

A similar species in Britain is Anthophora retusa, although it is much rarer. 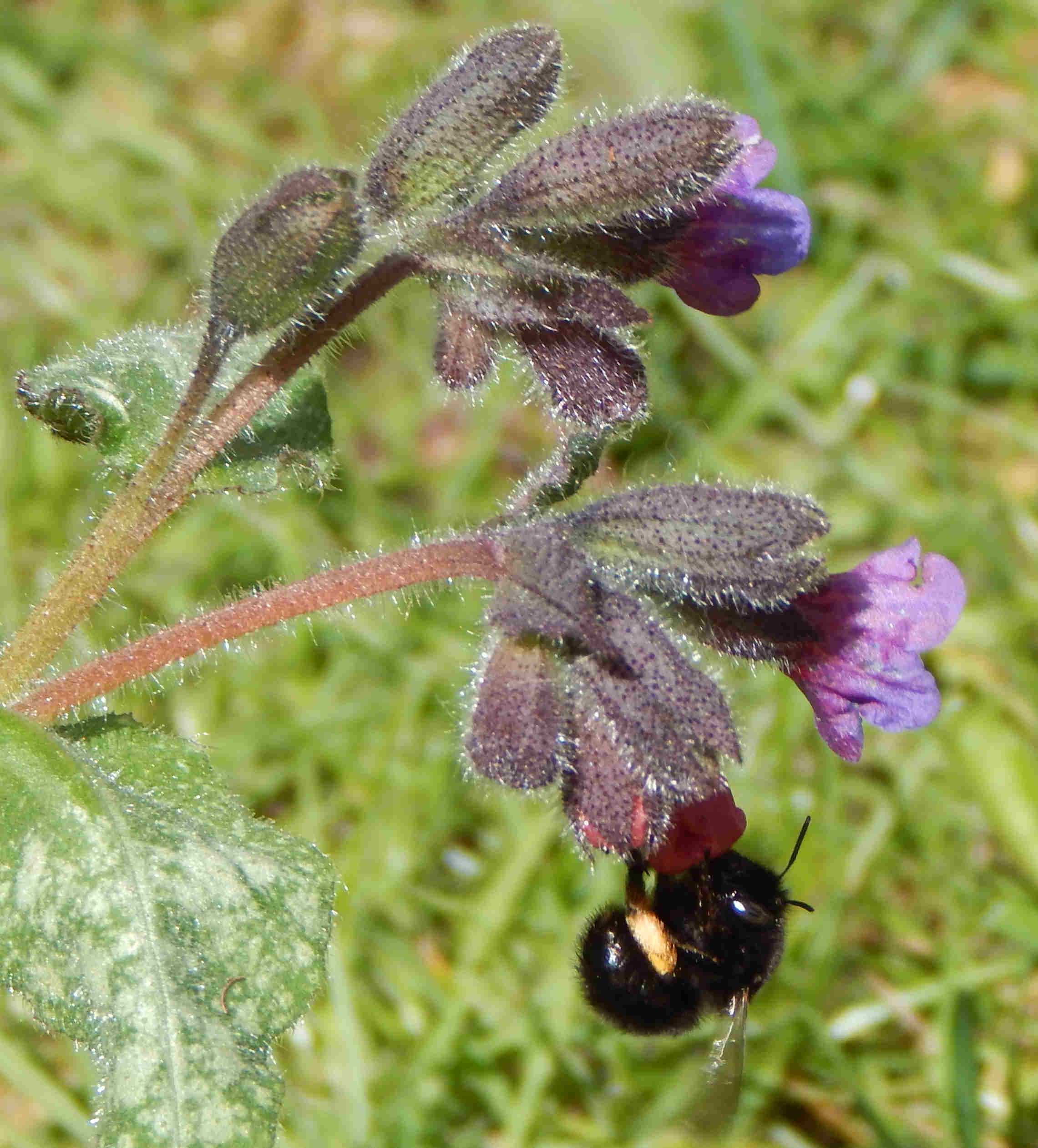 Above: Hairy-footed flower bee female. Pulmonaria is a useful early source of food for these bees.

The video below shows a female foraging on the Pulmonaria in my garden.  It's a favourite plant of this species, and very useful in the bee-friendly garden.

In my garden it flowers from the very end of January/early February through spring, thus providing an early and valuable source of food for bees.

Does the hairy-footed flower bee really have hairy feet?

Yes, but then bees are covered in hair.  The male of this species does, however, on close examination, have particularly hairy feet and legs – which have a feathery appearance.  I like to think of this bee as being a bit like 'the hobbit' of the bee world!

Anthophora plumipes may be seen from February or March when females emerge from hibernation.   Females are black and are sometimes misidentified as small, dark bumble bees. 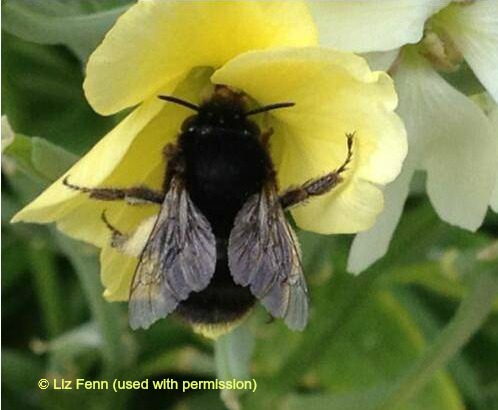 Thanks to Liz Fenn for this image of a Hairy-footed flower bee (female).

The males emerge about 2 weeks later, and are quite different in appearance.  Indeed, male Anthophora plumipes can easily be mistaken for gingery bumble bees (such as one of the carders) or bee flies.  It doesn't help that they may even be seen foraging on the same flowers.

Below is an image of a hairy-footed flower bee (Anthophora plumipes) male. 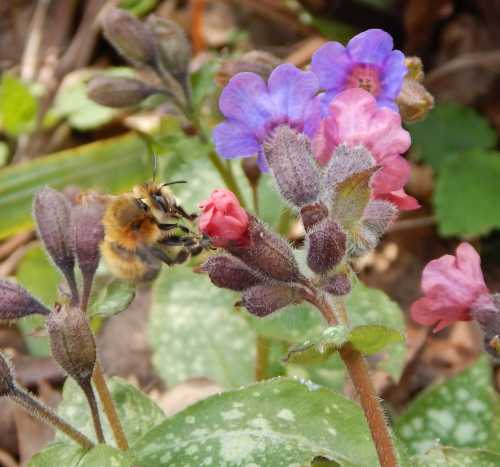 The gingery-furred hairy-footed flower bee male could easily be mistaken for a carder bumble bee, or a bee fly.

Below is a carder bumble bee, also feeding on pulmonaria. 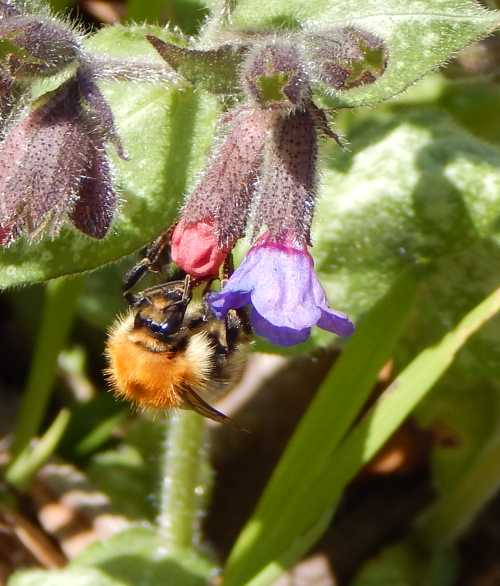 The image below shows a bee fly (Bombylius major), which  has a darting flight.  However, it has a longer, thinner out-stretched tongue, beady eyes that face forward, and only one pair of wings.  This species also has dark wing markings, although Bombylius minor is even more similar in appearance, and lacks the dark wing markings.

You may see both males and females approaching flowers with their notably pointed tongues sticking out.

Hairy-footed flower bees belong to the bee family Apidae, and therefore technically belong in the long-tongued category of bee.  Approaching a flower, the outstretched tongue looks sharp, pointed and sturdy, in contrast to that of the gingery bee fly, which actually has a much longer, slender tongue. 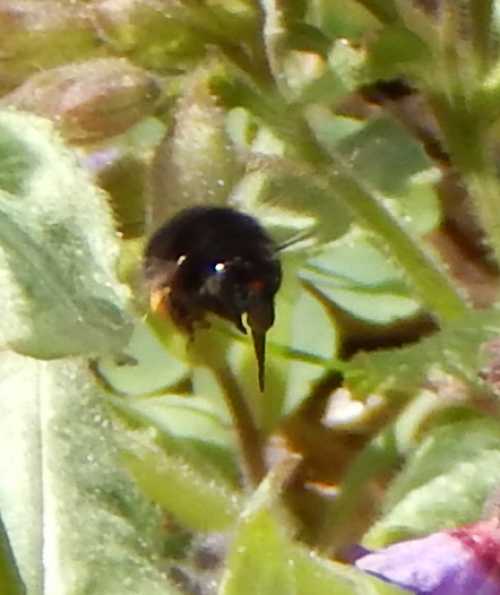 I didn’t find it easy to capture these bees on camera, for three reasons.  Firstly, the angle of the sun made it difficult for me to know whether the bee was in the frame or not. Secondly, note the flight. This species has a swift, darting flight, with frequent hovering.

Thirdly, I only have a basic little camera!

Other plants especially enjoyed by the species include dead nettle, ajuga, comfrey and other borage species.