I was very please to spot long horned bees close to where I live.  The female was foraging on wallflowers on an old wall.  More than likely I suspect there was also a nest in the same wall just around the corner - as I explain below.

On first glance, the female of this bee can easily be mistaken for an Anthophora species - see the male of the hairy-footed flower bee.

Below is an image of a long-horned bee, Eucera longicornis. 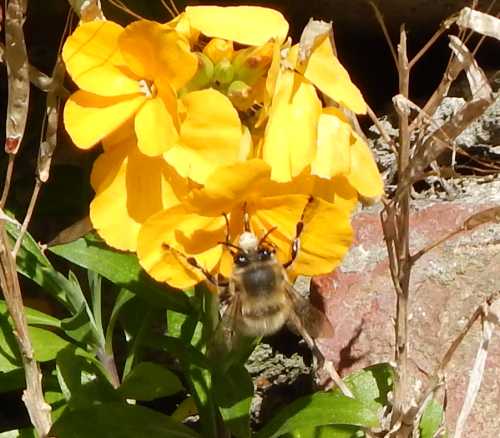 Given that this species is the 'long-horned bee', and its Greek name 'Eucera' means 'well horned', you may be wondering about that from the pictures above - i.e "where are the long horns?".  Well, the images above are of a female, and only the males have long horns (i.e. long antennae).  I was unable to capture a photograph of the male long-horned bee, so have taken one from Wikipedia as seen below. 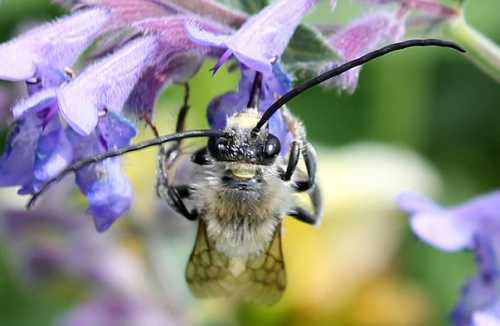 Males are around from May, with females appearing a week or two later.  Females may be seen through to August.  They create burrows in sparsely eroded soil on south facing slopes, old walls or cliff faces.  They tend to nest in aggregations.

Foraging habits of the long-horned bee 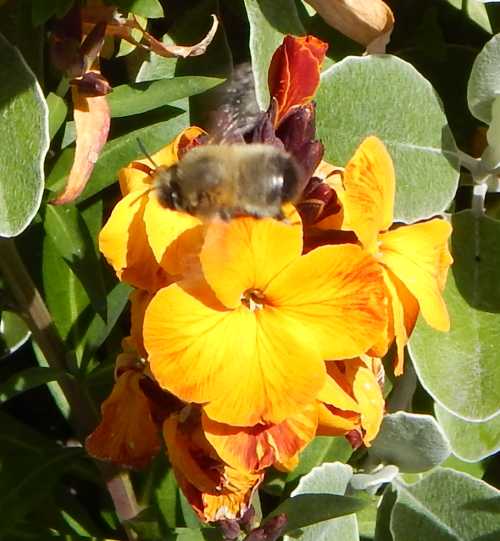 Most text book writings I have come across note that this particular species feeds primarily on flowers from the pea family (Fabaceae) - such as clovers, vetches, bird's foot trefoil.  However, British organisation: BWARS (Bees Wasps And Ants Recording Society) also mentions geranium, bramble, heathers, comfrey and members of the Boraginaceae, Lamiaceae (such as Bugle - Ajuga reptans)  and Liliaceae.  Radish (Raphanus spp) are also mentioned, which is a member of the Brassicae family - the same family as the Wallflower.

Parasites of the long-horned bee

In fact, if you spot these bees patrolling an area of wall or rock face, it's likely there will be long-horned bees nesting there - but beware - nomad bees can look very similar!  There are similar nomad bees, for example, that target mining, plasterer and mason bees among others.