The Wool Carder Bee, Anthidium manicatum is a lovely bee, and fascinating to observe, particularly as some of its behaviours are so distinctive.

Perhaps this should not surprise us - it is, after all a member of the Megachilidae family of bees, along with that other delightful group to watch - the leafcutters.

If you want to see these bees, one of the best places to catch them is around lamb's ear - (Stachys byzantina) where they may be foraging from May to August, depending when the lamb's ear is in bloom.

Later in this article is a short video of a female wool carder gathering plant hairs (a term known as 'carding'1) with which to create her nest cells. 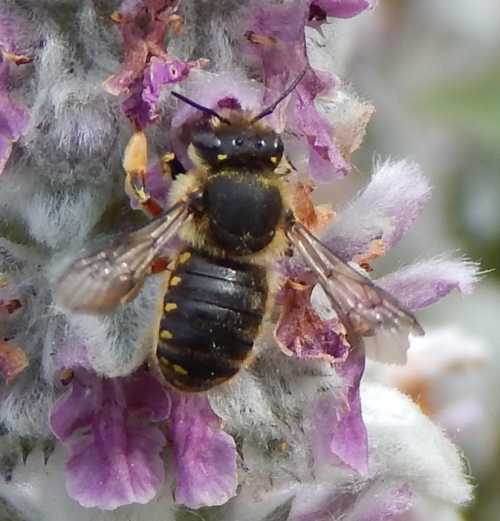 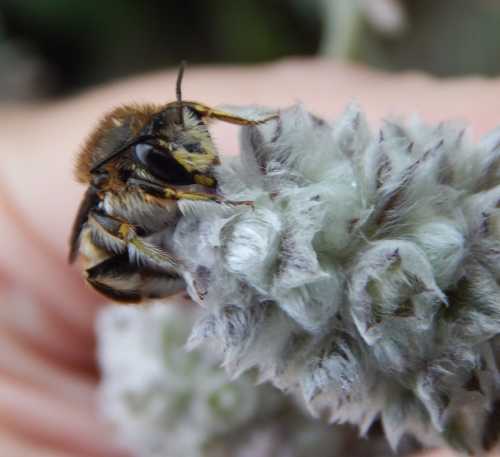 Wool carder bees are beautiful bees - a delight to watch. 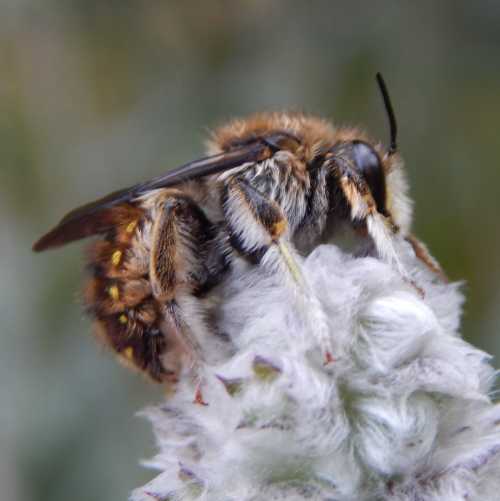 Look out for the lovely wool carder bee foraging on lamb's ear. Above - a male.

Lamb's ear is a firm favourite with wool carder bees particularly for constructing her nest cells.

The female gathers the hairy fibres (trichromes) from the plant into a ball, and takes it back to her chosen nest site.

Below is a video of a female gathering hairs from a lamb's ear plant:

Nests are made in existing cavities, usually hollow stems, dead wood or small holes and cavities in trees.  At the nest, the female fashions the hairs into cells where she lays an egg, and leaves behind food (a 'mass' comprising pollen and nectar) to feed the emerging offspring2.

The female creates at least one, but usually multiple cells in a single cavity, which is finally plugged (called a 'terminal plug') with organic and inorganic matter that is carried to the nest2.

In the UK a single generation of offspring is raised each year3.

However, a study of Anthidium manicatum in New York state suggests that new bees either emerge later that summer as the second generation of a bivoltine (producing 2 broods per season) life cycle, or overwinter as prepupae and emerge the following spring (Payne et al 2010, citing Kurtak, 19732). 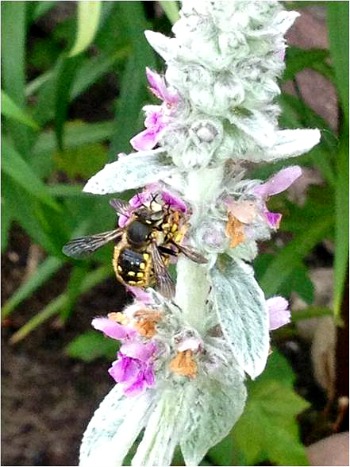 There are some variations in the strength and colouring of the yellow markings.  At first glance, some specimens of  Anthidium manicatum, could easily be mistaken for a wasp – see the striking yellow and black markings on the female above.

Males defend floral territories visited by females that are foraging for food and nesting materials. 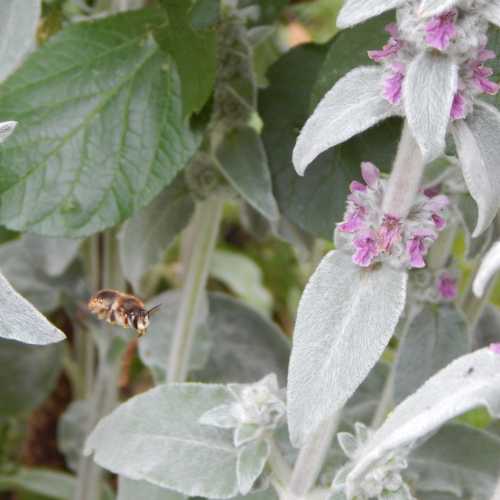 One of my patches of lamb's ear being patrolled by a wool carder bee male.

In my own garden, I have observed how male wool carders are very territorial and protective of their patches of lamb's ear, only allowing female wool carder bees anywhere near the flowers.

I have witnessed them not only chasing off rival males, but also bees of different species, literally dive bombing much larger bumble bees, seeing off mason bees, and any fly landing on a flower. 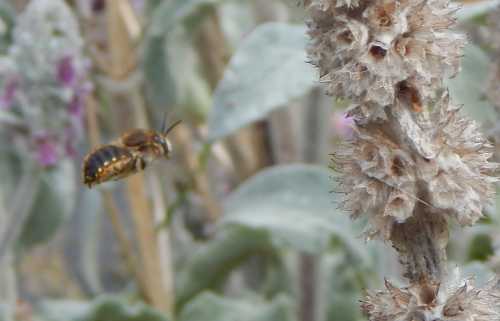 What the males are waiting for, is an opportunity to mate with the females, who are 'flown at' or 'ambushed', pounced on, quickly mated with, and then left to continue foraging.

I managed to take some pictures, but it all happened so fast, that I'm afraid they are blurred. 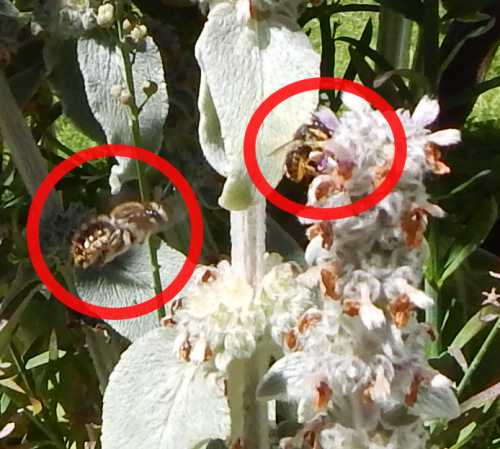 On the left, a male wool carder bee approaching a female as she forages on lamb's ear flowers. He will pounce on the female. Mating is all over very quickly, and the female will continue with her foraging.

Still, you get a sense of the speed at which this all happens. 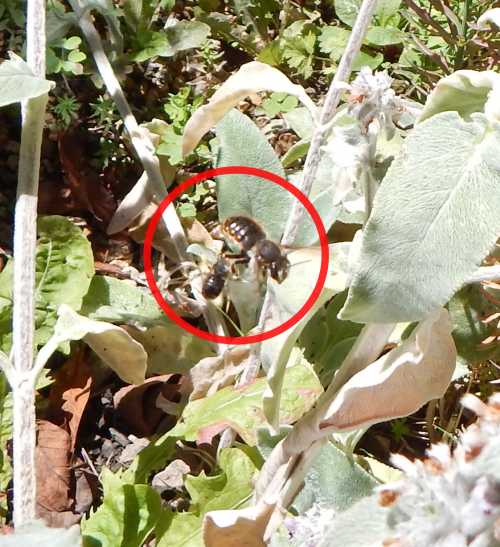 What is also clear from these photographs is that the males are larger than the females.  In fact, some males can be particularly large, and research has shown that male size correlates with mating success2.

This male biased sexual size dimorphism is relatively unusual in the world of solitary bees, where females are usually larger than males3.

Bees may be larger in areas with significant  abundance of flowers favoured by wool carders, suggesting a link between nutrition and size2.

Spikey Abdomens
An interesting physical characteristic of the males is that they have 5 visible spikes at the end of the abdomens.

Try as I might, I could not get a very good photograph of this characteristic, but you can just see 3 of them peeping out of the end of this male's abdomen if you look carefully.  I highlight these in the lower photograph below. 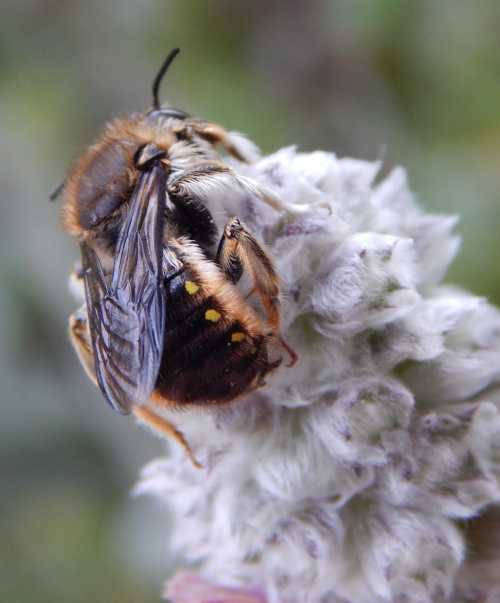 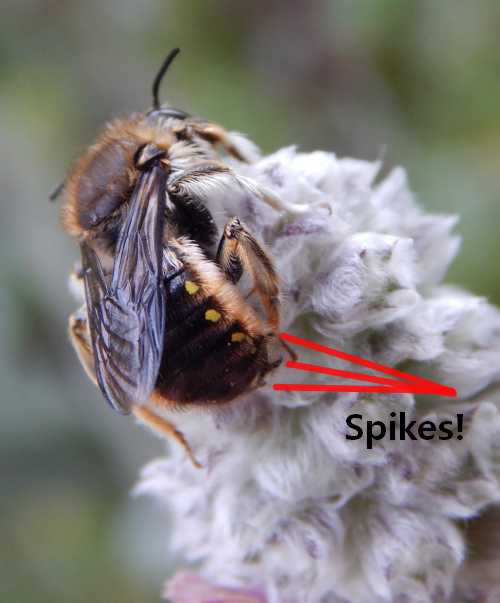 According to Falk, these spines can be used to help the bee aggressively crush an intruder if needed!

I have never observed this behaviour, but I have certainly seen them 'head butting' other insects! 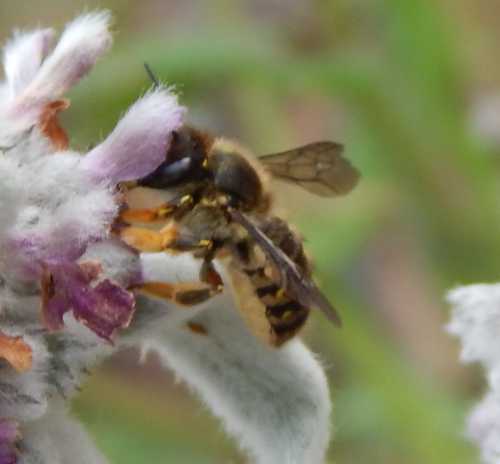 I have to say that I made a deliberate effort to attract wool carder bees to my garden. 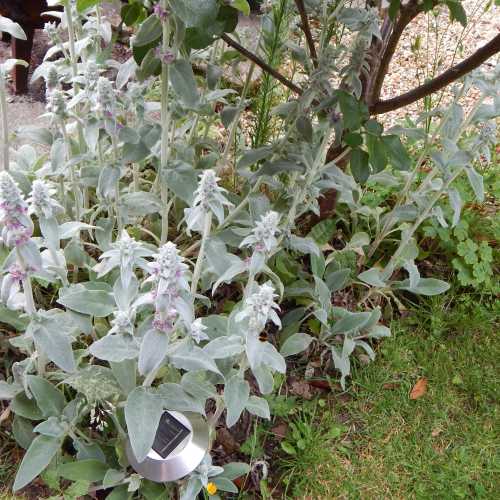 One of the patches of lamb's ear in my garden - a sunny spot beneath the plum tree.

In making the effort, I planted lamb's ear - I already had at least two other favourite plants: purple toadflax and hedge woundwort. 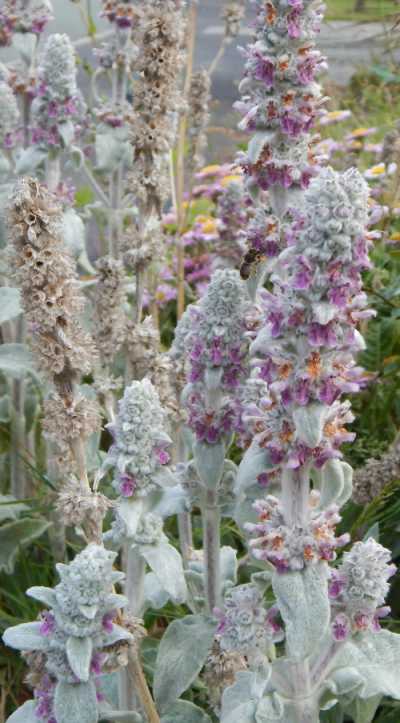 This patch of lamb's ear is in my front garden.

As the patch grew, I transferred young plants to two other areas, one in the front of the garden, and an additional spot in the back.  This means I now have 3 patches of lamb's ear, along with the other plants these bees like to forage on.

My reasoning is that these three parts of my garden vary in the amount of sun they get during the day, and I believe this slightly affects the blooming of the plants.  I also felt it would be interesting to see whether a particular patch was preferred over another.

What I found was that all of the patches of lamb's ear were foraged on by females and patrolled by males.

The female wool carder also took a liking to the purple toadflax, and the hedge woundwort behind my greenhouse.

In my efforts to increase forage and populations of bees, I also gave lamb's ear and purple toadflax plants to a neighbour just around the corner, and some to a concerned friend in the next village.

I recommend that if you are in the same position with bee-friendly plants to spare, find out if you can give them away to a neighbour, school or gardening group - where they will be used. 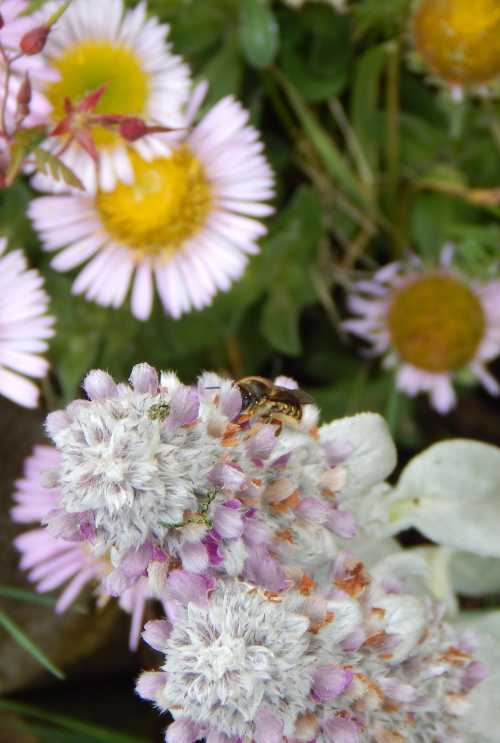 3. Field Guide to Bees Of Great Britain And Ireland by Steven Falk.