What is Manuka Honey?

If you have seen Manuka Honey on the shelf in the supermarket or health store, you may be curious as to where it comes from, and what is so special or unique about it?  So what is Manuka honey?

What are the characteristics of Manuka honey?

Manuka honey is a very viscous honey (that is, it seems to be very thick, and doesn’t flow easily) – and is probably the most viscous of all honeys.

It has quite a dark colour – although it can vary from dark cream to dark brown.  The taste is described as earthy or slightly bitter, while some people describe it as being herbaceous or aromatic.

It is a monofloral honey (produced by bees that have visited predominantly one species of plant - in this case the Manuka bush) but combinations can be found - you may see Manuka multifloral honey on the market. 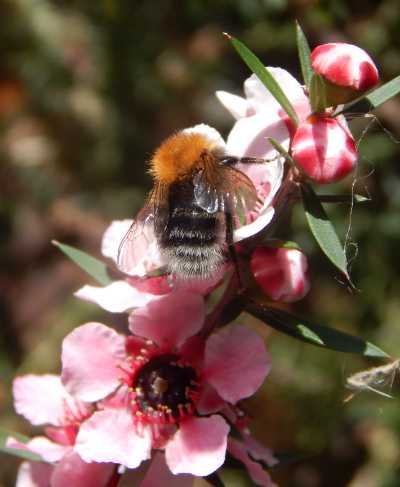 Leptospermum scoparium has also been introduced to other countries as an ornamental shrub.  I live in the UK, and have a very beautiful Leptospermum scoparium (pictured above and below).  It gets covered in bees from end of May onwards, and the flowers are delightful.  Once the bees have had their fill and nectar secretions have reduced, the hover flies move in to lap up the residues.

This shrub needs a sheltered spot - ours grows against the sunny wall of our house.  We originally had two of these shrubs, but the other was planted in an exposed position, and didn't survive a snowfall. 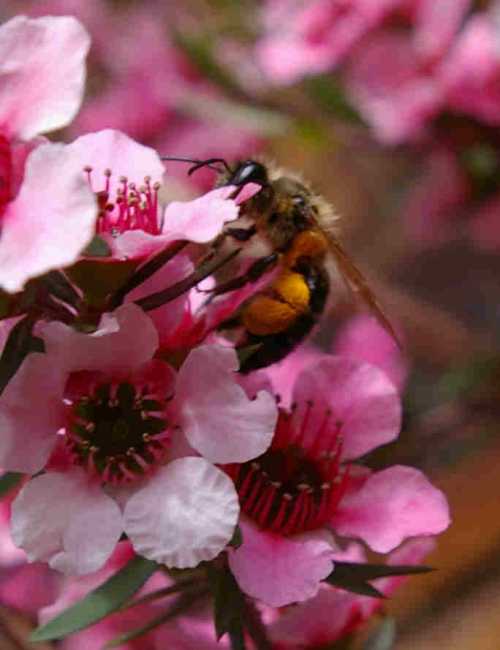 The flowers are popular with honey bees but also a range of bees, including solitary bees. Hoverflies are also regular visitors.

Leptospermum scoparium comes from the same plant order and family as the Tea Tree (renowned for its antiseptic and anti-bacterial properties):

Is Manuka Honey different from other honey?

There are a number of claims made about manuka honey with regard to health and clinical benefits.  Some of these claims are explored in depth on other pages:

Adulteration
The first controversy concerns the validity of the honey – is it genuinely manuka honey from New Zealand, or is it adulterated?  To be labelled as manuka honey, at least 70% of the pollen content must be from the L. scoparium tree, which exists predominantaly in New Zealand and so the New Zealand Manuka Honey production should represent almost all the world’s production.

However it is interesting to note that the New Zealand Manuka Honey manufacturers trade association (Unique Manuka Factor Honey Association - UMFHA) states that about 1,300 tons of manuka honey are manufactured each year (2013 data), and yet about 10,000 tons of manuka honey is sold worldwide each year.  In other words there is more Manuka Honey being sold than is actually being made!

Sample testing by UMFHA in UK, China and Singapore has revealed that some Manuka Honey is adulterated with syrup (about half of the samples they tested in 2012 / 2013).  It is not immediately clear how to tell when faced with a jar in a supermarket: whilst the colour can be seen, it is not possible to test the viscosity without purchasing a jar and opening it.

However, John Rawcliffe, from New Zealand's Unique Manuka Factor Honey Association, said the word manuka is a New Zealand word derived from the Maori language, and that New Zealand Manuka Honey is supported by research.  He says:

"New Zealand manuka honey, believe it or not, it was first produced back in the 1840s in New Zealand and it's become famous because of the body of research that has been initiated in New Zealand."(2)

Medical uses
The third controversy revolves around the possible medical benefits.  Test tube studies (in vitro studies as they are called in medicine) have shown that manuka honey has an antimicrobial activity against a number of pathogenic bacteria and fungi.

However, when clinical studies are done to test the effect of manuka honey on patients’ symptoms for some conditions (in vivo studies) the effects have been variable, or requiring more evidence before they could be used in a publicly accountable clinical setting, such as the UK NHS.

It has been shown that, whereas the antimicrobial effect of non-manuka honey is due to a number of factors (including peroxide levels), with manuka honey it may be due to a component of the honey called methylglyoxate, although this has been disputed.  But although manuka honey has shown significant activity in some studies (including against MRSA) other clinical studies show mixed, though some promising results in wound healing.

More evidence would be needed to support use in acne (what does exist, seems to suggest manuka may not be beneficial for this condition - please get in touch if you learn of any new or conclusive evidence either way).

You can also get manuka honeys with a guaranteed level of MGO  but the benefits of more MGO may not be clear.