In 1866 an English entomologist, William Edward Shuckard1 noted that the name 'Melecta', which is derived from Ancient Greek and translates as 'honey, I collect' (or 'honey collector') is somewhat at odds with the nature of this species:

"Named from μέλι, honey, λέγω, I collect ; which is scarcely the case, for the parasites, although they may indulge in the luxury of honey as epicures, or resort to it as a repast, cannot be said to collect it, for it is only the labouring bees that truly collect it for the purpose of storing."

[Please note, I am aware that the Greek: μέλι συλλέγω (from μέλι - (meli) meaning 'honey' and from συλλέγω - (syllego) meaning 'collect') might be more accurate for 'honey, I collect', however the quoted text above is as written in the book by Shuckard]. 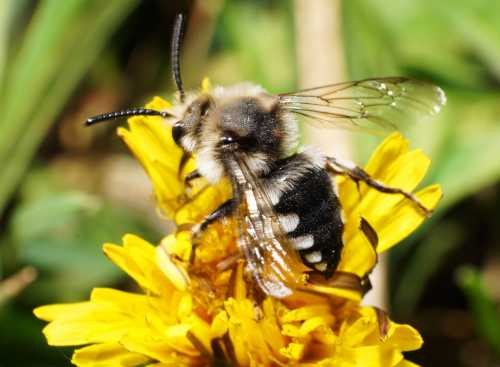 These bees belong in the Apidae bee family and are therefore categorized as long tongued.

They have a fuzzy thorax and a point to the tip of the abdomen, which is useful to this species as they go about parasitising the nests of their target hosts.

Observations of Melecta separata callura by Thorpe (1969)2 described how the species attacked the nest of its target host, on this occasion, the ground nest of Anthophora edwardsii (Edward's Digger Bee)﻿.

Melecta separata callura patrolled the nest sites of an aggregation of Anthophora edwardsii.

Anthophora edwardsii excavate burrows with nests at the ends, which it then backfills with soil once eggs have been laid and provisioned with food, and nest cells sealed.

Upon locating a suitable nest that had already been backfilled (closed), Melecta separata callura re-excavated the burrow entrance, then opened up a small hole in the wall of the nest cell.  Using its pointy tail, the parasite oviposited an egg on either the roof or upper wall of the host cell.

Once finished, the mourning bee backfilled the nest once more, and left.

Upon emerging from the egg, the Melecta larva consumed the food intended for the host's offspring, which were promptly destroyed with its huge mandibles (mouthparts), along with any other parasite eggs, if present.

Can Flower Bees Defend Their Nests From Cuckoo Species?

If detected in the vicinity, Shuckard reports that Anthophora acervorum (now Anthophora plumipes - the Hairy-footed Flower Bee), will behave defensively toward Melecta, fighting with the cuckoo species if necessary.

"This section [Anthophora] is subject to the parasitism of the genus Melecta, whose incursions are very repugnant to them, and which they exhibit in very fierce pugnacity, for if they catch the intruder in her invasion they will draw her forth and deliver battle with great fury."

Thorp also observed that whether they had positioned themselves at the entrance of a nest burrow or not, individuals of Melecta separata callura, were often attacked and driven off by their target host.

Litman (2019)3 notes that brood parasitic bees have evolved physical characteristics that lend some protection to the parasite, in particular, a tougher exoskeleton than non-parasitic bees.

Melecta species have been observed to visit spring tree blossoms such as apples and cherries, and shrubs such as gorses.

Distribution Of Melecta Species In UK, USA And Canada

Falk states that 60 species are present within the Palaearctic and Nearctic regions4.

In the USA there are 4 known species5:

In Canada, 2 species are recorded by ITIS5:

Only 2 species are recorded in Britain4, one of which (the Square-spotted Mourning Bee, Melecta luctulosa) may be extinct or rare, mirroring the demise of its target host, Anthophora retusa (the Potter Flower Bee)4.

The remaining species found in Britain is Melecta albifrons (the Common Mourning Bee). 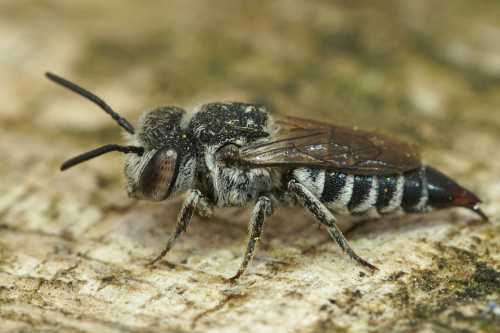 4. Field Guide to Bees Of Great Britain And Ireland by Steven Falk, Bloomsbury 2015. 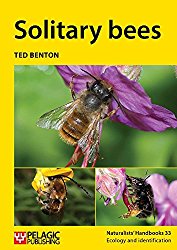