Do Wasps Kill Or Attack Bees?

Because I have a number of pages about wasps on this website, I am often asked about whether wasps kill, attack or eat bees, whether  a wasp can even kill a large bumble bee, and whether or not bees and wasps can 'get along'.

Firstly, it's worth noting that bees and wasps are related.  Wasps are generally beneficial insects, and yet bees can indeed fall prey to wasp attacks and may even be killed by wasps.

It is interesting that one species of wasp, the yellow jacker or common wasp, is perhaps the most likely to be seen as the undoubted enemy, and yet its attacks on bees may not be successful, whereas other wasp species can be far more deadly!

Why do wasps kill or attack bees? Can wasps and bees ever get along?

From time to time, you may see wasps foraging close to bees, and sometimes even sharing a large flower head.

However, the reason for wasp attacks on bees is to provide food for themselves or their young, and in some cleptoparasitic wasp species, it is also to provide a host to house and feed a larva. 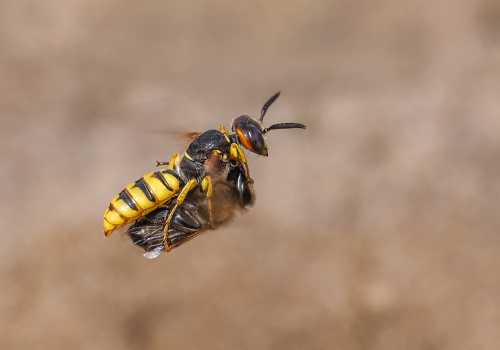 Philanthus are solitary wasp species known to target a variety of bee species.  Females can be quite large, and typically stalk bees as they forage on flowers.

After stinging the bee on the bottom of the thorax, the bee is still alive but paralyzed. The bee wolf then carries off her prey to her nest site (usually a hole in sandy soil), depositing it inside the nest entrance.

Once she has gathered around 5 paralyzed bees, she lays an egg nearby, seals up the entrance, and the emerging larva then eats the bees provided by its mother1.

Philanthus triangulum is known to especially attack honey bee workers, but has also been observed to capture mining and nomad bee species among others. 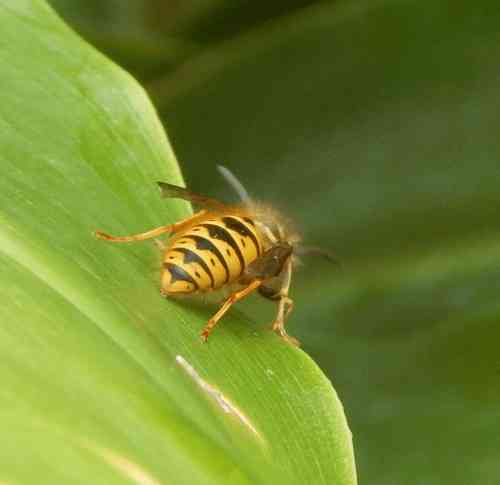 Wasps are known from time to time to target honey bee hives, either visiting to steal nectar stores, or even to take larvae to feed their own young.

Providing there are merely one or two wasps visiting the colony, the individual worker honey bees guarding the nest entrance of a bee hive, will soon defend themselves against a few wasps.

Should a wasp try to enter a hive or nest, there could indeed be a fight between the wasp and the bees, with both parties attempting to bite or sting each other to death if the wasp is persistent.

Greater danger for the bees arises if many wasps arrive, and especially if there are multiple entrances or gaps in a hive.

Vigilant beekeepers can take action to help honey bees defend themselves against wasps, and one of the best ways to do this is to ensure the entrance into the hive is as small as possible.

Below is a video by beekeeper, Phil Chandler.  In it he reveals a simple method for plugging the entry into a hive, in a bid to help honey bees.

In addition, care can be taken to ensure the parts of a hive fit together properly to ensure there are no large gaps through which wasps (yellow jackets) can easily enter.

Cuckoo wasps are cleptoparasites.  A cleptoparasite is an organisms that targets the provisions gathered by a host species for its own young.  A female typically enters the host nest and deposits an egg, but never occupies the nest herself.

It's worth remembering the beneficial role of some species of cuckoo wasp, that, for example, help farmers defend against crop pests, not to forget the emerald jewel wasp (also known as the emerald cockroach wasp) that kills pest cockroaches.

However, this family of wasps may also select bees as its host (along with cockroaches, sawflies, and other wasps)2.  It is interesting to note, that these wasps have lost the ability to sting.

Thus, if a bee finds a cleptoparasite wasp inside its nest, the wasp has little to defend itself, other than its tough exoskeleton.

Should the wasp manage to lay an egg inside the nest, once hatched the wasp larva will kill and eat the bee larvae and the food (nectar and pollen) intended for it and provided by the mother.

To read about hornets, see my page: bees vs hornets.

Interestingly, some honey bee species in various regions of the world have evolved very effective methods to deal with hornet attacks, including from Asian giant hornets.  To read about this, visit my page: How Do Bees Defend Themselves Against Hornets?

1. Wilson & Messinger Carril - The Bees In Your Backyard