Many people don't like wasps, yet they are amazing creatures and they perform a very valuable role in the ecosystem. Here we'll look at some amazing facts about wasps, including some less well-known ways in which wasps benefit humanity!

Wasps are on a par with bees in terms of their ability to build incredible nests, which differ according to species.

For example, there are wasps which create amazing structures with hexagonal cells as above (in a sense, similar to those of honey bees) yet the cells are painstakingly made from tiny little pieces of chewed up wood.  These cells are enclosed in a 'ball shape', and may be seen suspended from tree branches or from buildings.  Read more about the structure of a social wasp nest.

Then there are potter wasps (also known as mason wasps), which create nests from mud.  You can watch this process on this lovely short video clip:

Wasp nests may also be underground or in cavities, and some species will take advantage of pre-existing holes.  In any event, wasps can be versatile and genius home builders!

2. Paper:  the wasps thought of if first!

The invention of paper (in the form we know it today) was possibly inspired by the activity of wasps!   The story goes that around 2,000 years ago, a Chinese eunuch called Cai Lun watched a wasp skillfully building a paper nest in his garden, which it created from fine slithers of chewed up wood it had collected in its mouth.  Cai Lun was inspired to experiment with wood mulches, eventually creating paper.  This is worth remembering the next time you pick up a book or a newspaper!  (Please don't use it to swat the wasp!).

Whether or not Cai Lun had gained his inspiration from watching wasps, nevertheless, it can be noted that with regard to paper making (from wood pulp), the wasps thought of it first! 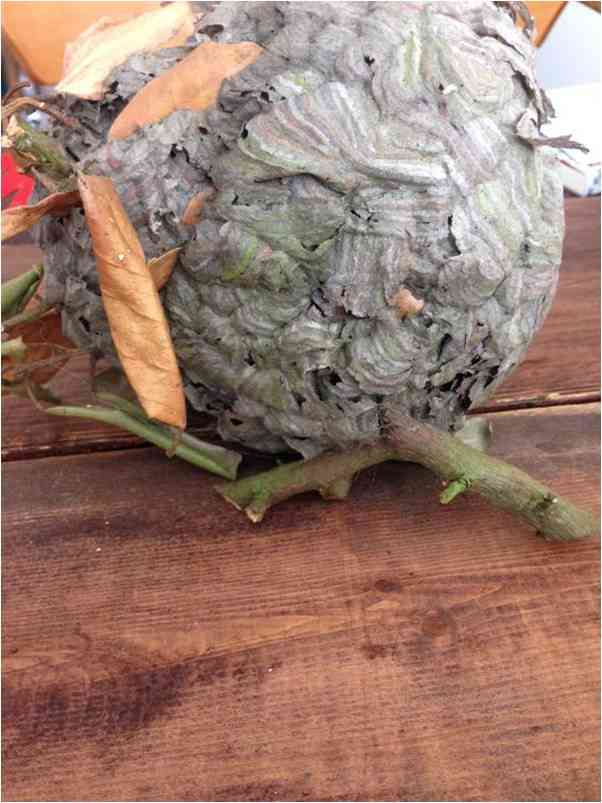 A wasp nest may well have provided the inspiration for the invention of paper!

At least as far as humans are concerned!  Wasps chomp their way through many crop 'pests' such as aphids - these are not eaten by adult wasps, but are collected by female adult workers and fed to larvae back at the nest.

According to the Natural History Museum in London, social wasps in the UK are estimated to capture about 14 million kilograms of insect prey annually, such as aphids, caterpillars and greenfly.  Imagine the service wasps must be providing globally!

Not only do wasps play an important role in the garden they are increasingly used deliberately by farmers in agricultural settings.  Read more about this 'body snatcher wasp'.

A species of wasp found in Brazil known as Polybia paulista, produces a toxin in its venom that eliminates cancer cells without harming healthy cells.  The toxin is known as MP1 (Polybia-MP1)

You can read more about this in the Biophysical Journal.

Known as the 'jewel wasp' or the 'emerald cockroach wasp', this is another wasp species beneficial to humans, because they help keep down populations of pest cockroaches.  The stunningly beautiful, emerald-green jewel wasp is smaller than its cockroach target, but nevertheless, it attacks and stings the cockroach with a mind-altering venom!  This renders the cockroach helpless.  The wasp then lays its eggs on the leg of the cockroach, which despite being stung multiple times, remains alive.   A young jewel wasp  larvae works its way into the abdomen of the cockroach and develops inside its body, eating it from the inside!  You can learn more about the jewel wasp from this video below:

6.  Most wasps are not yellow, black and stripey

Most people think of wasps as yellow and black stripey insects (as in the image below), but it is estimated that only about 1% of all wasps have this kind of coloring.  There is variation across the world, including wasps which are jewel colored (as mentioned above), or which feature various shades of red, orange or brown, and some with white markings (including on the legs).  Like bees, many wasp species are black and look like tiny flies.

7.  The smallest known insect in the world is a wasp!

Commonly referred to as the 'fairyfly' or 'fairy wasp', these are actually chalcid wasps in the Mymaridae family. There are a number of species within this family ranging from about half a millimetre to a millimetre in length, but the smallest (Dicopomorpha echmepterygis) is believed to be less than half a millimetre long at 0.14mm, making it the smallest known insect in the world.

These tiny wasps play an important role in agriculture, helping farmers by laying their eggs in crop pests.

8. Wasps are the ancestors of bees 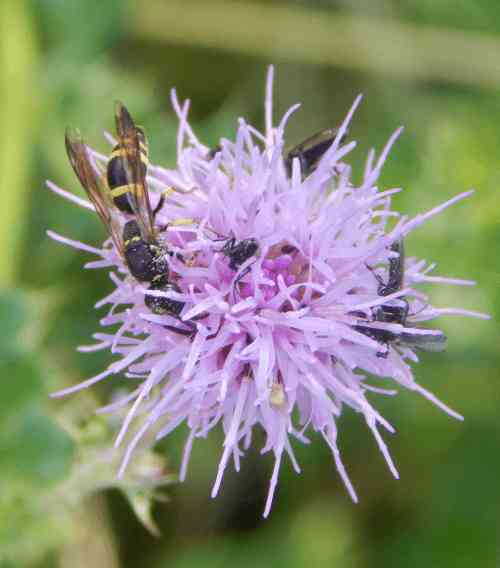 Indeed, some species of bees could actually be mistaken for wasps.  Steven Falk, author of Field Guide to Bees of Great Britain and Ireland also states:

“There is little doubt that within the Apoidea, the hunting wasps came first and provided an ancestor that gave rise to bees” .

You can read more about this subject here: are bees and wasps related.

I cover this in detail elsewhere, but like bees, wasps too are pollinators.  Some species of plant are only pollinated by wasps.  Read more about this: do wasps pollinate?

Wasp colonies can have thousands of members, just like honey bee colonies, with one egg-laying queen, many workers, and male wasps, all working hard to maintain and support the colony, build the nest and forage for food.

Worker wasps do not mate, but they can nevertheless lay eggs - all of the eggs laid by worker wasps would produce male wasps.

However, though we tend to think of wasps living in large colonies, most wasps species are actually solitary.

Natural And Chemical Free Methods To Repel Bees And Wasps