Here are eight commonly asked questions about bees and hornets.

How large is the biggest bee compared with the largest hornet?

The world's largest bee, Wallace's giant bee (Megachile pluto), is found in Indonesia.  Females are larger than males and measure about 1.5 inches (3.8cm).  Meanwhile, they have a wingspan of about 2.5inches (6.35cm). 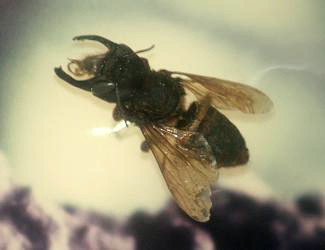 These bees feed on nectar and pollen, but females also collect tree resin with which it constructs its nest cells.

The nests themselves are constructed in termite mounds.  See the video below:

There's no doubt, the world's largest hornet, the Asian Giant hornet (Vespa mandarinia) is huge.   Native to Japan and other oriental regions, adult queens are about 2 inches long (5.08 cm), and the  wingspan measures about 3 inches (7.5 cm).

This hornet also collects a substance from trees: tree sap, but tree sap forms an important part of the adult hornet diet. Developing hornet larvae, however, are fed other insects, especially beetles, but also wasps and honey bees along with their brood. 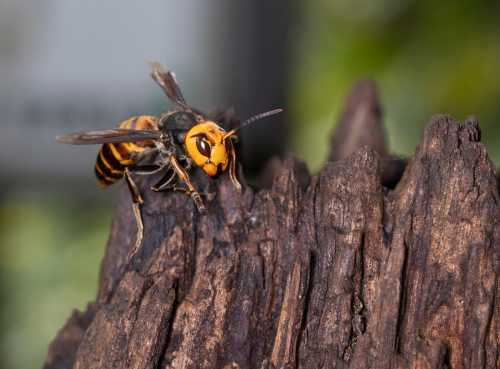 Asian Giant hornet. Very handsome, but potentially deadly if you are a bee or a beetle!

The Asian Giant hornet nests underground in burrows or cavities at the bottom of trees, an example of which can be seen in this video below:

Not all hornets nest in the same kind of locations.  Some prefer to make use of aerial cavities, others construct nests which are truly architectural masterpieces, a bit like the nests of some wasp species (e.g. paper wasps).

No, hornets eat bees and their larvae.  Hornets are predators, especially of honey bees.  Why?  Because honey bees live in large colonies, meaning that a colony of bees provides a lot of food for hornets.

Hornets not only hunt individual bees as they forage, or return to their nest or hive, they also raid honey bee nests, killing thousands of bees as they do so. Dead bees and their brood will be returned to the hornet nest to feed the offspring of the hornet queen.

However, honey bees, especially in Asia, have developed methods to defend themselves against hornet attacks.

3. Can bees kill hornets?  Do bees and hornets fight? 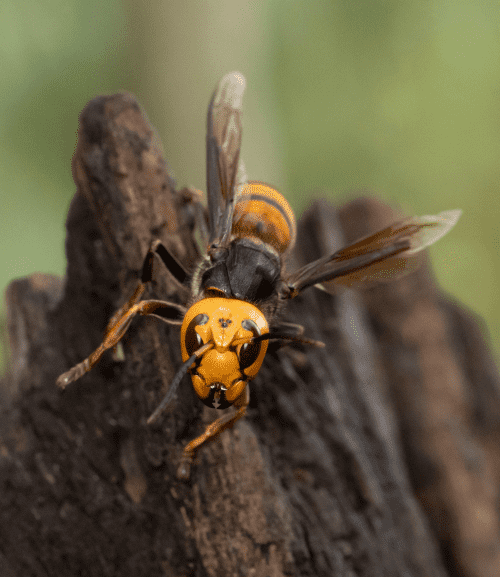 Giant Asian hornet - huge, but if it ventures alone into a hive, it's no match for a cluster of Asiatic honey bees.

Honey bees can certainly kill single hornets if they enter a honey bee nest or hive.  Some honey bee species are more effective at killing hornets than others.  The Asiatic honey bee, Apis cerana (also called the Asian or Eastern honey bee) is known (perhaps a fascinating display of 'hive mind') to form a large cluster of bees around single hornets, including the Giant Asian hornet.  The hornet is overheated and dies.

Watch this short video below:

Most bees are solitary and gentle, and their stings are not particularly painful, and according to one study, the sting of all the solitary bees included, had a low level of toxicity.

However, research has shown that a honey bee sting is even more toxic than the sting of the Asian Giant hornet (bee and hornet sting venom are not the same).

However, this doesn't mean a sting from a honey bee is more deadly or painful.  The Asian Giant hornet can inject 10 times more venom from a single sting, and can do so repeatedly, unlike the honey bee which will die if it stings a human.  Read more about bee, wasp and hornet stings.

5. Which bees and hornets have the most toxic stings?

We don't have data for every bee and hornet sting, but we have data for 19 of them2, and of those studied, the Philippine hornet had the most toxic sting, followed by Vespa tropica, the greater banded hornet.

A swarm could be defined as a large or dense group of flying insects.

In that sense, it is true that if a hornet's nest is disturbed, it would be a good idea to run for cover, because this may well provoke a group of (annoyed) hornets to fly out of the nest.

However, this is not quite the same as a honey bee swarm, which is simply a dense and compact group of honey bees on the move and on the look out for a suitable place to nest.  A honey bee swarm will not only be formed into a compact mass, it will consist of far more individuals than would be witnessed in a fairly loose crowd of irritated hornets. 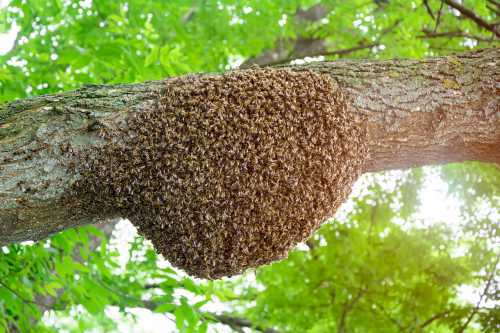 A swarm of honey bees

7. Are bees and hornets related?

Learn more on the page: Are bees and wasps related?

8. Are bees and hornets equally valuable?

The value of bees is undoubted.  There is far more research regarding the contribution of bees in terms of their value to humans (pollination, hive products of honey bees etc), than there is research for hornets (and indeed, wasps) overall.

However, hornets play an absolutely crucial role in the environment.  For example, hornets hunt and eat many bark beetles, and let's be very grateful they do so.  Bark beetles (of which there are a number of species) can be incredibly destructive, invading and killing many healthy trees.  Trees support not only human life and activity, but also the environment for a wide diversity of flora and fauna.

Whilst it is true that hornets may take bees for prey, it should also be remembered that hornets themselves are prey for birds, reptiles and all manner of mammals from bats to hedgehogs, weasels and badgers.  "Nature is red in tooth and claw" - as Tennyson put it.  As far as hornets are concerned, whether they attack bees or bark beetles, it is because they have the biological urge to feed their young, as humans do.

Can Bees Sting Other Bees?


Do Bees Fight Each Other?