Are Bees Better Than Wasps?

Why are you writing about wasps?  Bees are way better than wasps.

Thank you, Caitlin for your message.  I thought this topic was worthy of a page!  So let’s tackle the question:

Are Bees Better Than Wasps? 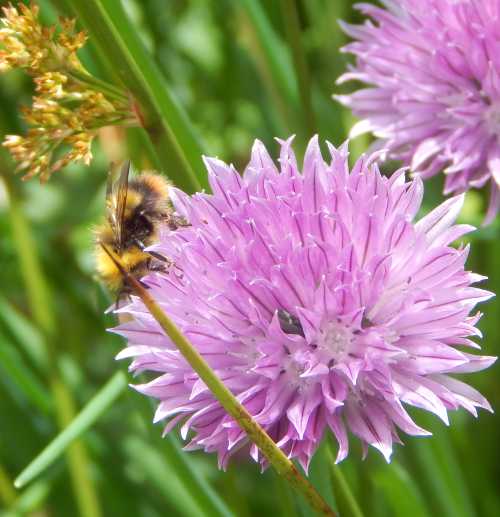 Many bees are 'cute and fluffy' like this Early Bumble Bee, Bombus pratorum.

The contribution of bees to pollination are well documented, with huge amounts of resources funnelled toward assigning a value to that contribution.

If we add in the fact that many bee species are cute and fluffy, are unlikely to sting, and that there are industries associated with bees (the sale of solitary bee houses, honey and wax products made by honey bees and so on), then it’s easy to see why we might automatically think that bees are far more important than wasps.

But is this true? 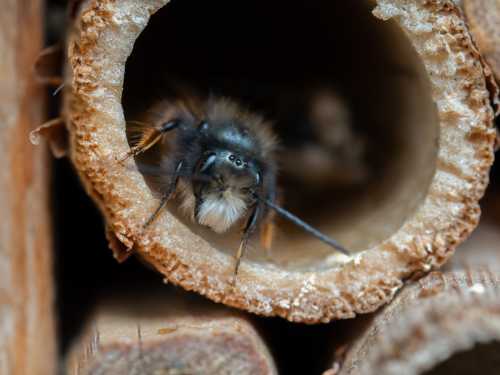 We enjoy watching bees active at solitary bee houses that we site around our gardens.
(Pictured above, European orchard mason bee, Osmia cornuta.

I started this website as a means to help raise awareness of the plight of bees, but it soon became clear to me that a PR job for wasps was long overdue.

I observed that wasps are overwhelmingly associated with stings.  On the other hand, there’s an apparent lack of appreciation as to their value, not to mention a tremendous variety of species.

Furthermore, despite my love of bees since childhood, I think it’s right to point out that weighing the value of these two groups of species is complex, and probably not even helpful.

1. There are more wonderful wasp species than people are aware of

When most people think of wasps, it’s the yellow and black striped insects that spring to mind, and how they cause concern around picnics, or help themselves to ripe fruit. 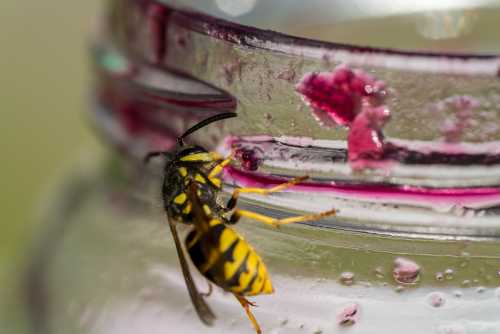 Above, most people's idea of a wasp looks like this - probably the German Wasp, Vespula germanica.

However, there is a great variety of wasps, most of them solitary, and going about their business to the benefit of the ecosystem.

This large, beautiful hairy wasp will only sting if threatened.  It is a fabulous pollinator of flowers, and takes significant numbers of garden and crop pests to feed its offspring. 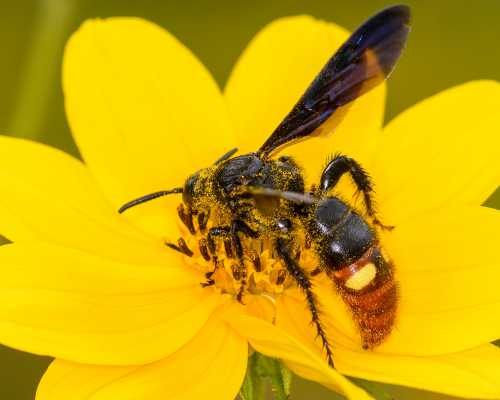 It’s a shame we don’t give credit to the small wasps that help gardeners and farmers keep crop pests low.  It’s a pity we forget about those species that tackle pest cockroaches.  Some wasps even make honey!

Indeed, there is much to admire, and be fascinated with in the world of the wasp.

I love the comment by entomologist, Eric R. Eaton in his book Wasps – The Astonishing Diversity Of A Misunderstood Insect:

“We cower when confronted by the smallest of spiders, but a female tarantula hawk wasp hunts down the largest arachnids.

We cannot recall where we parked our vehicle, but a sand wasp can locate her hidden burrow in a dune.”

It seems to me that it’s unbalanced to base our overall opinion of an entire group of species, on the general experience and perceptions of just a few.

2. We don’t know much about the contribution of wasps

I often point out that relatively little research exists on solitary bee species (and even bumble bees) in comparison with the volumes of research on honey bees.

However, no doubt significantly less research assessing the contribution of wasps has been undertaken, and of the research that exists, it’s awarded a relatively low profile.

Since 2009, the general profile of bees has increased enormously, along with financial grants to study this already charismatic group of wonderful insects.

In tandem, with the threats faced by bees, major institutions have sought to place a monetary value on the contribution of bees to pollination, so that humanity might understand what is at risk, at least in financial terms, if we don’t do something to reverse the situation.

Eric R. Eaton also points out that many species are allies in medicine and invention. See - Are wasps beneficial?

Perhaps one day, scientists will attempt to assign a value to the contribution of wasps, but as far as I am aware, nobody has done it yet.

However, if we don’t know much about wasps, how can we compare them with bees?

3. The contributions of individual bee and wasp species may vary

Not only do we understand relatively little about wasps, we also don't know everything about bees.  However, scientists have found that not all bees are especially valuable pollinators of all plants, including food crops.  Some bees are suited to pollinating particular plant groups.

This point further reinforces the futility in attempting to make comparisons based on very limited information.

Now to the first part of Caitlin’s email as to why I also write about wasps.

To an extent, I have covered this elsewhere on my page explaining that bees and wasps are related – in fact, bees are descended from wasps.

Put another way, (and as Eric R Eaton points out) bees are just hairy wasps (although some bees are certainly hairier than others).

Just in case readers think this is an isolated viewpoint among entomologists, it really is not.

For instance, Wilson & Messinger-Carril (authors of The Bees In Your Backyard) also comment:

“Interestingly, bees are really just a special kind of wasp.”

Wasps are divided into 2 main groups, those in which the ovipositor has evolved as a sting and those in which it has not.  The stinging wasp group are called ‘Aculeata’, and both bees and wasps belong in this group (along with ants).

Bees then get separated further into the ‘Anthophila’ group (Anthophila means ‘flower lover’), but this does not negate the fact that bees belong within the Aculeata (wasp) group overall.

This provides further justification for my reasons to write about wasps on this website, along with my assertion that not only in my view, are wasps fascinating, they also are worthy of a PR job.

It is true that some wasp species will take bees to feed their young.  This is the natural order of survival.  You can read more on my page: Do wasps attack bees?

It's worth noting, however, that bees will sometimes even 'fight' or attack each other.

Bees are the canary in the coalmine for other insect species.  The forces (especially habitat loss and insecticides), that threaten bees also put other invertebrates at risk including wasps.

It seems to me that it’s not helpful to compare bees and wasps when we arguably don’t know enough about the former, and understand very little about the latter.

What we do know, however, is that each group contributes to the balance of the ecosystem, simultaneously benefiting other wildlife and humanity.