Is a hornet sting worse than a wasp sting and how do they compare to bee stings?  Which are most painful, and which have the most toxic venom?

Which stings are the most dangerous to humans, and do bees, wasps and hornets sting each other?

The short answer is:
According to one scientific paper, of the sample studied, 2 species of wasp delivered the most painful stings, and both were tarantula hawk wasps, yet their stings were also the least venomous.

A paper wasp, Polistes infuscatus had the most toxic venom.  The yellowjackets, honey bees and bumble bees included in the study appeared about mid-way in both tables.  Most solitary bee species delivered low-pain stings that were among the least venomous.

Bee Vs Wasp Vs Hornet Stings: A Comparison

If you have read my page 'Bees vs Hornets', you may be wondering how a hornet sting would compare with a bee sting, and where wasps such as yellow jackets fit into the equation in relation to sting pain and lethality (toxicity) of venom.

It so happens that we do have at our disposal, some data that will help to answer this question, at least for some species.  The data comes from an entomologist called Justin O. Schmidt, (author of Sting Of The Wild), who published a paper in 2019: Pain and Lethality Induced by Insect Stings1.

In the study, the painfulness of stings of 96 species of stinging insects and the lethalities of the venoms of 90 species were assessed, and some of those insect species were bees, wasps and hornets.

The data for those species has been extracted and is presented here, along with an explanation.  Full tables appear further down the page, but for now, let us consider the species occupying the top 3 slots for pain level and venom toxicity.

(Note that despite the name, 'velvet ants' are in fact, wasp species).

In general, what we can already see from this data, are the following points:

Is this the whole story with regard to sting pain?
Probably not, and there are some limitations with the data.  For example: 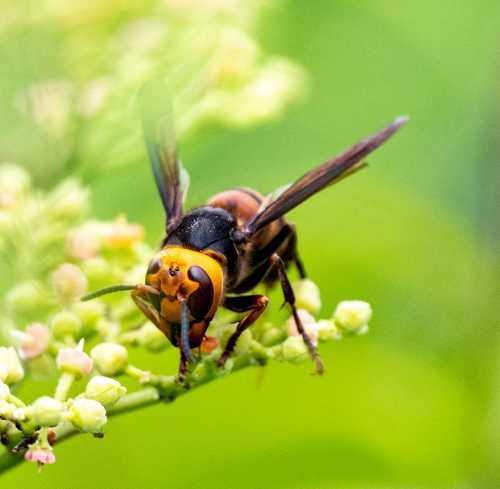 If you would like to know more about this research and the species compared (including honey bees and yellowjackets), please read on.  Otherwise, you might be interested to learn where stings hurt most.

Which Stings Hurts Most?
A Comparison Of Pain From Bee, Wasp And Hornet Stings

In Schmidt's paper, pain level was graded between 1 and 4, with the score 4 allocated to the most painful stings.

Of the 58 wasp, hornet and bees species tested, the 3 most painful are highlighted in the table above.

After that, most of the remaining social wasps had a pain score of 2, including those commonly referred to as yellowjackets (both Vespular vulgaris and Vespular germanica).  They shared this score with the baldfaced hornet, Dolichovespula maculata, the honey bees, the bumble bees, and two further solitary bee species (both Xylocopa).

Although wasp species had the most painful stings, it was a solitary wasp, Sapyga pumila (club-horned wasp) that had the least painful sting of all, along with two solitary bee species (Triepeolus sp. (cuckoo bee) and Dieunomia heteropoda (giant sweat bee) all sharing a score of 0.5.

Which Stings Are Most Toxic?
A Comparison Of Venom Toxicity From Bee, Wasp And Hornet Stings

In the study, 50 bee, wasp and hornet species were assessed for the level of sting toxicity.

In making his comparison, Schmidt used a measure known as LD50 (also commonly used in assessing the lethality of insecticides).

LD50 is the quantity required to kill 50 percent of test subjects, and in this case, those subjects were mice. The less venom required for a lethal (killing), the more dangerous and toxic the substance.

Can bees, wasps and hornets sting each other?

Whilst defending their colonies, stinging may occur, although hornets have a tough exoskeleton in comparison with bees and smaller wasp species.

Honey bees in particular, have evolved various methods to defend their colonies against the threat of hornets.

Bees may sting other bees during conflict situations, for example, competition for nest sites, or robbing of nectar stores.  Read more on may page: Can bees sting other bees?

How can I protect myself against stings?

You could try a repellent containing Picaridin.  However, in general, even hornets are not out to get you!  It's best to avoid disturbing colonies.

This topic is covered in greater detail on my page about preventing stings.

Why do bee stings hurt?


Do Bees Fight Each Other?


Is a bee sting acidic or alkaline?