How Do Bees Make Beeswax
And Why Do They Make It?

Throughout history, beeswax has been used in multiple ways, especially for candle making, and furniture polish.  It was used to embalm the dead, and long ago it was even used to pay taxes.

Nowadays, beeswax is primarily used for making candles and furniture polish, but also appears in beauty products such as lip balm and hand cream.

The wax used in such products is made by honey bees, and turned into the various products mentioned.

However, you may be wondering how bees make wax, and why. It may also leave you with questions about how it is harvested from the beehive, and whether the bees mind us taking it.

In answering this question, we're also going to cover off wax made by other bee species, and how it differs from that made by honey bees. 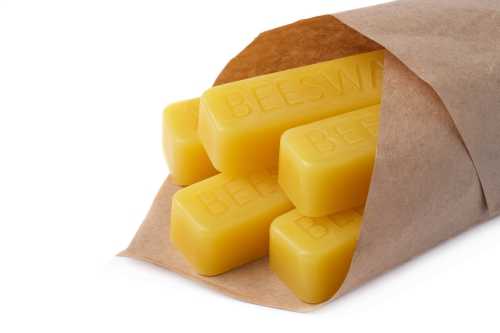 1. Have you ever wondered whether you should write bees' wax or beeswax?  The answer is that bees make wax - but note that 'beeswax' is written as one word

2. The word 'wax' is derived from the Old English word 'weax', and this term was only applied to the wax of the European honey bee, Apis mellifera.

However, in the 19th century, the term was gradually applied to other natural products that in some way, resembled beeswax.

3. It's well known that honey was used in ancient medicine, and so was beeswax.  It was recorded on the  Ebers Papyrus of  ancient Egypt (1550 B.C.) that beeswax was used in ointments and creams for  burns and wounds and even joint pain. The “father of medicine”, Hippocrates, recommended the use of beeswax in case of purulent tonsillitis.

4. The Vikings are famous for their mead halls, but it seems they valued beeswax sufficiently to transport it on their ships as evidenced by the finding of beeswax, in a 9th century Viking ship found at Oseberg.

5. Beeswax made by the European honey bee is a little different from beeswax made by Asian honey bees, being slightly less acidic.  Nevertheless, as with honey, which is acidic, the somewhat acidic properties of beeswax mean that it has some antimicrobial activity.

6. During the construction of wax comb, honey bees create  a lace-type mesh.  they do this by linking to form chains, literally by grasping onto each other by their feet.  this is called 'festooning'. 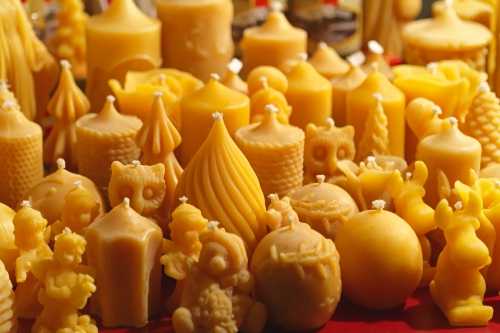 A variety of candles all made from beeswax

Most of the wax is produced by young worker bees and secreted from the wax glands on the underside of the abdomen when the workers are between 12 and 18 days old.

All worker honey bees are female.  The glands that secrete the wax will reduce in size as the bee grows and matures, and eventually takes on foraging duties. However, if necessary, older worker bees can step in to begin creating more wax.

After young bees have secreted liquid wax from their abdomens, in contact with the air, it solidifies into small scale shapes that other worker bees then gather, and model with their 'mandibles (jaws)' to build the honeycombs (adding pollen and propolis).

Below is a short video from a study of a honey bee making wax cells in a hive.  Watch carefully as she expels a small wax scale from under her abdomen!

Why do honey bees make wax?

Wax is used by honey bees to construct the individual cells that compose the honeycomb as well as the cells where eggs are laid for rearing young bees.

Below you can see a honey bee larva in a wax cell.  (Further information on my page about the honey bee life cycle). 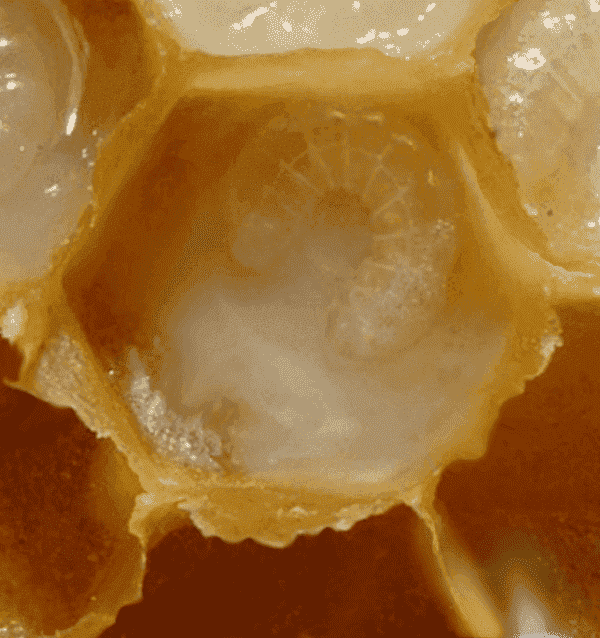 Honey bee larva in a cell - the walls of the cell are made from wax.

In the image below you can see comb built by bees in a natural nest. 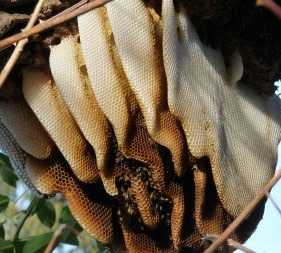 Combs are made from beeswax.

Wax is also used by bees at the end of the process of honey making. When the nectar that has been collected by the bees and placed into the honeycombs is ready, the bees ‘cap’ the honey.

This means that a layer of wax is added over the honeycomb, so that the honey may be stored ready for when the bees need it during the winter. To read more about this, see How Do Bees Make Honey?

When is beeswax made by the colony?

Most of the wax is made during the active growth phase of the colony, and typically between the months of April and June.

In particular, wax and comb production and construction in the bee colony are determined by the following:

Nectar flow:
It stands to reason that with ever greater quantities of nectar brought into the nest or hive, then the bees will need somewhere to store it.  This will result in more comb building, and a need for more wax.  Nectar flow also stimulates the wax producing glands of worker bees.

Brood rearing (egg laying):
In a productive colony with an active queen laying a single egg in each hexagonal cell, more wax must be created by the workers in order to create the comb for rearing more bees.

The presence of a queen:
Combs are only built in colonies that have a queen.

Temperature:
Conditions need to be sufficiently warm for bees to make wax.  Following the cooler winter period, temperatures begin to rise and colonies become more active in foraging, rearing young and so on.  In addition, the wax has to be worked inside the hive or nest.

What does beeswax contain?

There is some variance of beeswaxes among honey bee species, but the main compound families found in beeswax are: alkanes, alkenes, free fatty acids, monoesters, diesters and hydroxymonoesters.  Fatty alcohols and hydroxydiesters are minor constituents. 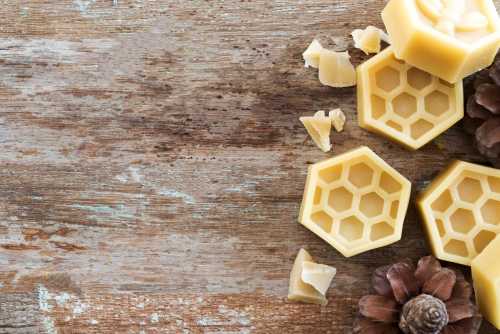 How is beeswax harvested?

Beeswax is harvested by beekeepers.  Whilst harvesting the honey from the beehive, they remove the layers of wax the honey bees have deposited over the honeycomb cells during the capping process.  For this, beekeepers use a special capping knife.

The beekeeper will then process the beeswax to remove impurities, and then furnish it into other items, such as balms or candles.

Can you eat beeswax?

Indeed, natural beeswax is edible. You may sometimes see honey for sale complete with chunks of wax honeycomb inside the jar.  The honeycomb is edible, along with the honey.

However, obviously you shouldn't eat other processed products made with beeswax such as furniture polish. 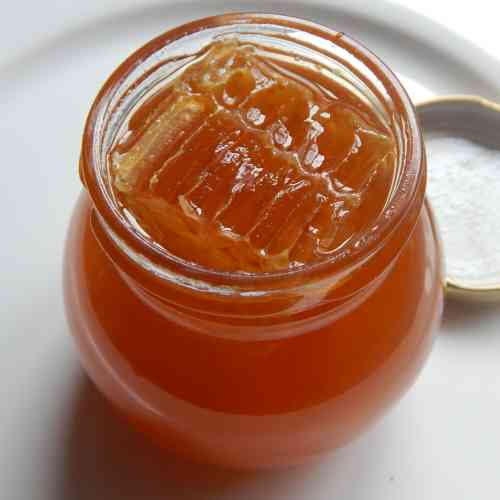 Read about types of honey.

Uses of beeswax made by honey bees

Interestingly, humans have been using beeswax in a variety of ways for many years, and not merely in ancient medicine, candles and furniture polish.

You can read about the use of beeswax as a painting medium on my page about 'encaustic art'.

It has long been used in beauty products, and today is used in items such as lip balm and hand creams.

Yes, bumble bees also make wax, and they use it for constructing nectar pots, and covering eggs.

With bumble bees, the making of wax starts after the queen has found a suitable place to nest. She must get to work producing the wax that she needs in order to rear her colony. Again, it is secreted from the underside of the abdomen.

Cuckoo bumble bees however, do not produce wax, and this is one of the features making them reliant on their chosen host species. 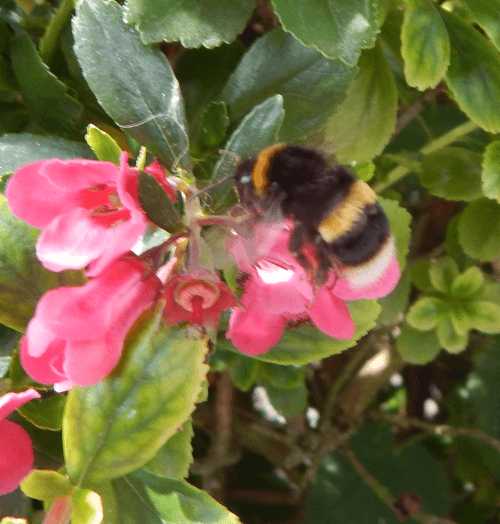 Of course, bumble bees do not construct honeycombs, as they have no need to store nectar for a very long period. This is because unlike honey bee colonies, bumble bee colonies do not survive the winter (apart from some species in very warm climates) – only impregnated queens survive and hibernate, then emerge the following year – see Bumble bee Lifecycle for more information.

How to make beeswax lip balm 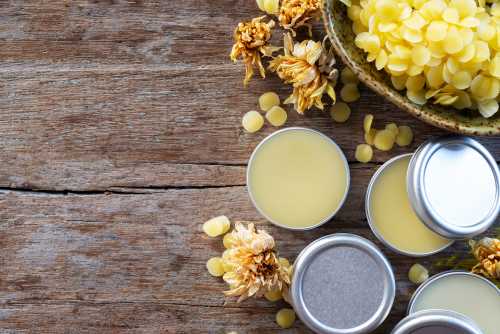 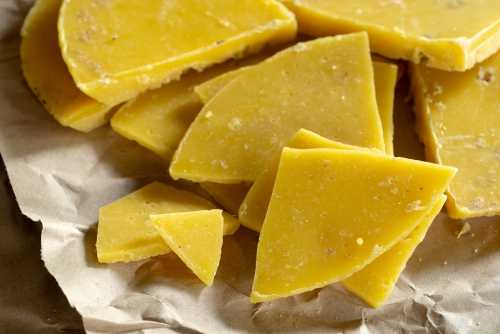 
Do bees have X and Y chromosomes? 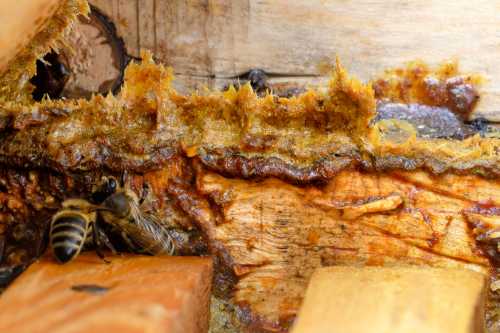