Bombus barbutellus (Barbut’s cuckoo bee) is a cuckoo species, and the target host is Bombus hortorum.  There is some variation in appearance.  In females, the tail is white and there are two yellow stripes on the thorax and one on the abdomen.
As with other cuckoo species, there are no workers.   Unlike female social species of bumble bee, female cuckoos do not have corbicula (pollen baskets).

Females can be seen from April – May, searching for the nests of hosts which will already have emerged from hibernation.  They may be seen exploring holes in banks or around rough patches of vegetation.  Males may be seen in June and July up to August.

Pictured below is a male – facial hairs on males are black.  However, there is some variation and some individuals can be very dark or almost black. 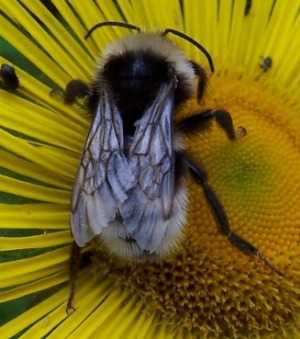 Bombus barbutellus may be seen on a wide variety of flowers, including white deadnettle, vetches, creeping thistle, bramble, knapweed, lavender and honeysuckle.