The common carder bumble bee, Bombus pascuorum, is widespread in the UK.  It is one of the later bumble bees to appear, but has a long foraging season and is a useful pollinator of autumn crops, such as autumn raspberries.

Queens are relatively small in comparison with other bumble bee species, at about 17mm in length.  They have gingery bodies, often with black/dark hairs, and usually ginger tufts of hair on the face.

Workers have similar colouring to queens, and can be very small.  Males have yellow hairs on the face, with some black ones. The face is longer in this species than it is wide, and it is a long tongued species.  This species is very easily confused with the other carder bees, B. humilis and B. muscorum.

Queens emerge from late March onwards.  They search for nest sites over tussocky grassland, where they prefer to nest, along with the edges of hedgerows and near shrubs.  Like other carder bees, they ‘construct’ their nests from grasses and moss, ‘woven’ together.

Workers appear from April onwards, and can be seen foraging through to October – even November during mild years and food availability permitting.  Males and daughter queens emerge from June.  Colonies of between 100 – 200 are reported. 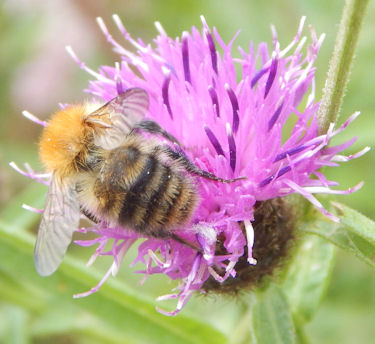 This species is host to the cuckoo bumble bee B. campestris, and may be parasitized by the nematode Sphaerularia bombi.  This species may also be attacked by the conopid fly, Physocephala rufipes.