Questions:
"It's very cold, and I have found a bumble bee.  It's not moving.  Will it be survive?"
"Can bumble bees survive cold weather?"

The short answer is:
Scientists have found that buff tailed bumble bees (Bombus terrestris audax) workers could freeze at temperatures of -7.1°C, whilst queens would freeze at about −7.4 °C.   There may be some similarities with other bumble bee species.  Thus, if temperatures drop to that level, they are unlikely to survive.  Here we look at the research, and how to help bees in cool temperatures, even if it's not quite so cold.

At the time of writing, the weather is typically hitting about 15°C, a temperature fine for bumble bees.  However, during the winter every year, I am asked whether bumble bees can survive in very cold conditions.  This query usually arises from people who have found an inactive queen bumble bee.  People become concerned about whether the bee will survive or will it die from exposure to the cold.  They are often wondering what they can do to help the bee.

The question of the survival of bees in cool temperatures has been the subject of published research in 2013 by Owen et al (1), a team of scientists who were primarily pondering this topic.  They wrote:

" ...it is crucial to determine whether key pollinator species such as bumblebees will actually benefit from climate change, or if winter activity might have a negative impact on their abundance, distribution and pollination service provision."

Scientists measuring what is called the supercooling point (SCP), which is a standard procedure to describe the cold tolerance of freeze-avoiding arthropods.

Owen et al specifically studied Bombus terrestris audax (buff tailed bumble bee), one of the earliest species of bumble bee to emerge from winter hibernation in the UK.  Other bumble bee species may respond in a similar way to cool temperatures, but differences may also occur.


Do all bee species have the same temperature tolerance levels?

Actually, no! For example, solitary species Osmia cornuta and Osmia rufa, are both hardier with SCPs typically below −24°C. 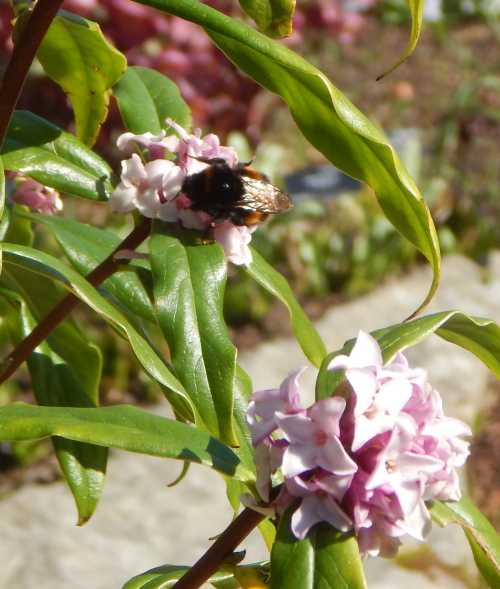 This stunning and exquisitely fragrant winter flowering shrub Daphne bholua 'Jacqueline Postill' is popular with bumble bee queens and honey bees in winter. I have even seen Comma butterflies foraging on during cold weather.

The most important thing you can do for the longer term, is provide winter flowering shrubs and plants for bees.  This will enable bees foraging in cool temperatures, to have ample access to food which will help to sustain them.

There are many choices available, from low-growing, hardy heathers that are versatile in the garden or in pots, to attractive shrubs, such as Daphne.

Bulbs such as crocus are invaluable.  Read  about  winter flower borders. 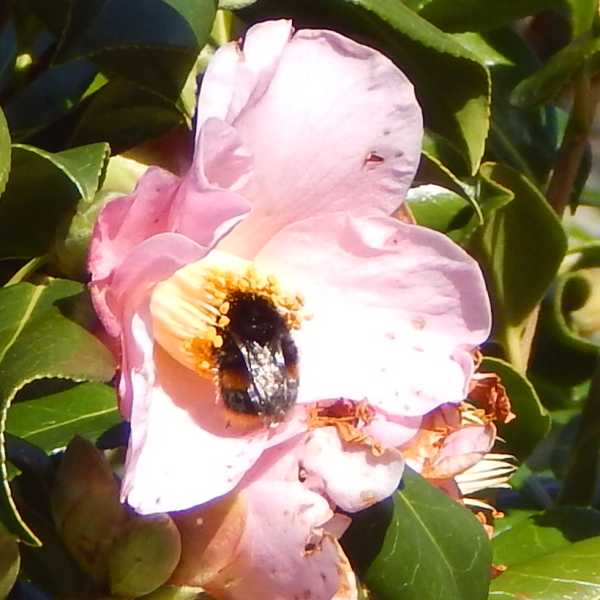 Plant winter flowering shrubs for bees, such as camellia.

I receive many emails from worried members of the public about finding bumble bees that are exposed to the cold, and apparently not moving.

There could be a number of reasons for this, including disease or internal parasite, or the bee may be resting.  Queens sometimes remain stationary on a flower or on the ground whilst they rest and conserve energy.

My advice is as follows: