Bombus pratorum – the Early-nesting Bumble bee, is one of, but not necessarily the earliest bumblebee to emerge from hibernation.  Other species such as the buff-tailed and white-tailed bumble bee may appear at around the same time – sometimes as early as February.

It is commonly seen in gardens, parks and roadside verges.

It is one of the most commonly seen and widespread species in Britain, and smaller than B. lucorum and B terrestris. Workers can be especially small.

This species is relatively easy to identify, having a peachy-orange coloured tip to the tail, but with black and yellow stripes on the thorax and abdomen, although some individuals can be extensively dark or yellow in their colouring. 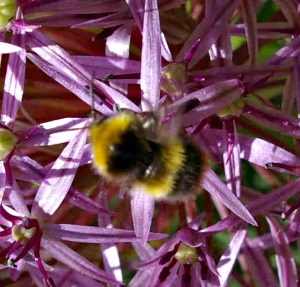 Having emerged from hibernation, queens will seek a suitable nest site in a variety of places.  They are adaptable, and may make a nest in a disused bird nest, rockery crevice, rodent hole, or a roof space of a building.  The first workers may appear from March, and males and daughter queens around May.  Colonies are thought to reach about 100 workers.  There will often be two generations reared in a year, particularly in the south of England.

This is a good pollinator of fruits and flowers, and feeds from a wide range of plants including pulmonaria, hebe, ground ivy, Mahonia, Viburnum, Erica,  Ceanothus, dandelion, white and red dead nettle, comfrey, raspberry, vetches, and others.

Having a short tongue, Bombus pratorum may engage in nectar robbing.