Between 2007 and 2008, the UK National Bee Unit and FERA (Food  and Environment Research Agency) carried out a study investigating Honey Bee colony losses in England and Wales.

Included within this study was the investigation of disease prevalence including the pathogenic fungi, nosema.

A number of studies have highlighted relationships between neonicotinoid pesticides and mortality in bees due to nosema:

“Indeed, it has been shown that low levels of some pesticides may have synergic actions with diseases such as Nosema. Finding diseases in test colonies, which were healthy before the experiment, and not finding such diseases in control colonies, can imply a synergic effect of pesticides and diseases”.

In April 2011, information was presented to Member of the European Parliament, Julie Girling  by Helen Thompson of Fera,  and Budge & Brown of the National Bee Unit.

Meeting notes were published, and others were in attendance, including Gavin Lewis of JSC International.

You can find all of the presentations by copying and pasting this web link into a new window:

You can download the specific presentation by FERA and the National Bee Unit here (opens a new window).

The presentation refers to a 2 year project to establish disease and pathogen prevalence in England & Wales across 4600 apiaries. Page 13 states: 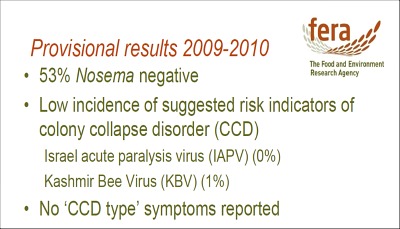 This is an interesting way of presenting the data!

This seems to imply 47% nosema positive, which is a very high percentage!

Imagine if 47% of the human population were found to be infected with one particular serious disease!   The presentation then goes on to say:

So why does the slide not state:

After all, this would seem like a more balanced representation of the data. 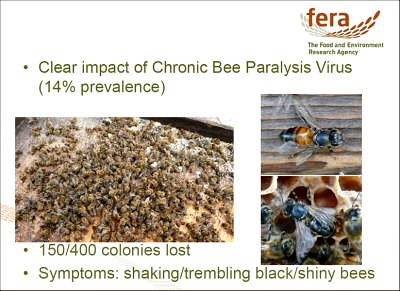 The results of the 2 year project were published, and indicate that 45% of the colonies had nosema – 8% of which had 2 strains.

The final report by FERA and the National Bee Unit provides no specific picture as to how many of the colonies actually died from nosema.  It doesn’t specifically tell us whether those colonies had been exposed at some point to neonicotinoids.

The National Bee Unit had also published a leaflet stating:

“Leading US researchers found N. apis to be more highly associated with CCD (Colony Collapse Disorder) than N. ceranae may well be a key player in CCD.

However, it is likely to be acting in concert with other pathogens or conditions.  In Europe the situation is different.

Abnormal colony losses reported in Europe have been attributed to the presence of N. ceranae. N. ceranae was the reported cause of 20,000 colony losses in the Salamanca region of Spain in November 2004……. It is important to note that the pathological data from Spanish apiaries are not consistent with a fast-acting, short-duration syndrome.

Inspite of this, and the independent studies on nosema and neonicotinoids such as those listed above, there are no recommendations that it might be worth monitoring and assessing losses due to Nosema, and whether or not neonicotinoids make honey bees more susceptible to death from nosema.

What Else About The National Bee Unit?

It is possible FERA and the National Bee Unit have not been or would not be able to detect neonicotinoids in their samples, which I find equally disconcerting.

“The finding that individual bees with undetectable levels of the target pesticide, after being reared in a sub-lethal pesticide environment within the colony, had higher Nosema is significant”.

In addition, whether or not the UK National Bee Unit is likely to have accurately pin-pointed the date of arrival of nosema in the UK, is perhaps a debatable point:

“When originally discovered in Europe in 2005, it was assumed that N. ceranae was a recent arrival (Higes et al., 2006).

I think the prevalence of nosema and suggested link between it and neonicotinoids, is a cause for concern, and should be taken seriously by the government.

Questions also need to be raised about the impact on other non-target species - which may become exposed to their own fungal diseases too.