Question:
Do wasps swarm, and if so, why do they swarm?

The short answer is:
For various reasons, some social wasp species are known to swarm and establish a new colony in a different location.

Many of the social wasp species with which we are mostly familiar (such as the German wasp that may show interest in our picnic foods and fruit drinks) do not swarm, however, a 2008 study published in Biological Journal of the Linnean Society, refers to over 30 species of swarming wasp found in South America1.

Other species such as Polybioides tabidu, are found in Africa2.

This list is by no means exhaustive, but some examples of wasps known to swarm include the following:

Reasons for swarming in swarm-founding wasps

There are 3 main reasons for swarming in wasps:

1. Absconding swarm
Social wasps may swarm if their nest is attacked by predators, such as ants, or becomes damaged beyond repair for other reasons, such as weather storms5.

2. Emigration Swarm
Wasps swarming may be related to seasonal factors in geographical locations.  For example, a swarm may form, and facilitate a move to a new location at the beginning of a wet season5.

3. Founding A New Colony
Social wasps that swarm transfer part of an established colony to another location, thereby creating a new productive colony4. 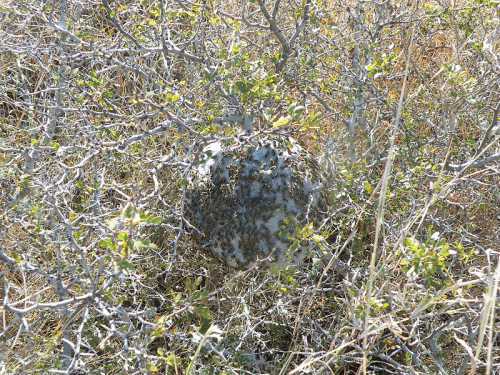 If a colony is absconding or emigrating, then in most swarm-founding wasps the entire adult population evacuates the nest5.  Alternatively, a part of the colony will swarm in order to establish a new colony elsewhere4.

The swarm forms a temporary cluster nearby, such as on the branch of a tree5.

Scout wasps begin the search for a suitable new site, and scent mark any routes to potential candidates with a a secretion from the sternal gland on the abdomen that is left on leaves and twigs.  The scent marks serve to recruit nestmates to inspect the site, and eventually, when a single site has been decided upon, this is communicated back to the swarm4.

The resting swarm of wasps then takes off into the air, and makes its way to the new preferred site.  Meanwhile, construction of the nest at the new site has already begun, but it may take up to a week before the new nest site is fully built4.

How far away do wasps swarm from their original nest

In one study concerning a species found in Costa Rica, Polybia occidentalis, it was found that a swarm may emigrate anywhere from 1m to 250m to a new nest site.  It may take 20 - 60 minutes for all individuals to reach the new site5.

Quite apart from the energy cost of swarming and setting up a new nest, the act of swarming itself is risky for a colony.  Potential predators could include mantids, robber flies, spiders and ambush bugs5.

Why do some species of social wasp swarm, whilst others do not?

This is largely dependent on the lifecycle of the wasp species.  Those social species with perennial colonies (i.e. potentially lasting multiple seasons) may swarm to form a new colony in a different location.  The colonies of other social species may be short lived, with only the newly emerged queens surviving and overwintering as adults, ready to emerge the following year to start a new colony.


Are Bees And Wasps Related?