What Is Tupelo Honey?

Famous for its sweetness and a honey festival to celebrate it, you may be wondering about Tupelo honey.  Here's some information I gathered to answer a few questions about this premium variety of honey.

What is Tupelo Honey and what makes it special?

Tupelo Honey is a distinct, premium-priced honey made by honey bees from the nectar they gather from the Tupelo tree.

Where are White Tupelo Trees to be found?

So you may be wondering where White Tupelo trees grow, and whether or not you could add a specimen to your garden.  Unfortunately the tree appears to be very picky about the kind of environment in which it will grow.

Both Tupelo Honey and the White Tupelo tree are particularly associated with Gulf County, Florida, where the tree grows in forests around the Dead Lakes and Apalachicola River region.  The seasonal flooding and damp soil conditions provide the ideal environment for the White Tupelo forests to thrive.  In fact 'tupelo' comes from the language of a Native American tribe, known as the Muscogee (Creek) Nation, and it means 'swamp'.

In Gulf County, this extraordinary tree grows to about 50 to 70 feet in height - often surrounded by an expanse of lake or from the Apalachicola River basin. 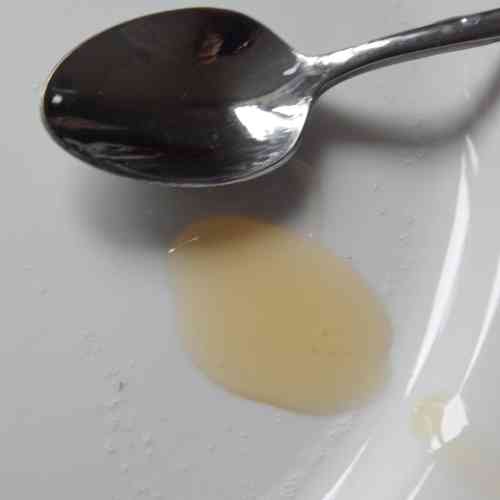 Tupelo Honey is so prized in the region, that an annual Tupelo Honey festival usually takes place in May, hosted by the small community of Wewahitchka (cancelled for 2020).  At this festival, beekeepers from the region gather and sell this rare honey.   I managed to find a couple of genuine suppliers who also offer their Tupelo Honey on Amazon (it looks to me like not all Tupelo Honey is from nectar gathered mostly from White Tupelo trees).

What do flowers of the White Tupelo tree look like?

The delicate, inconspicuous blooms of the White Tupelo tree start as a small, pea-sized bud, from which many pollen-laden anthers burst out, tempting honey bees to the sweet nectar at the base of each fragile spike. 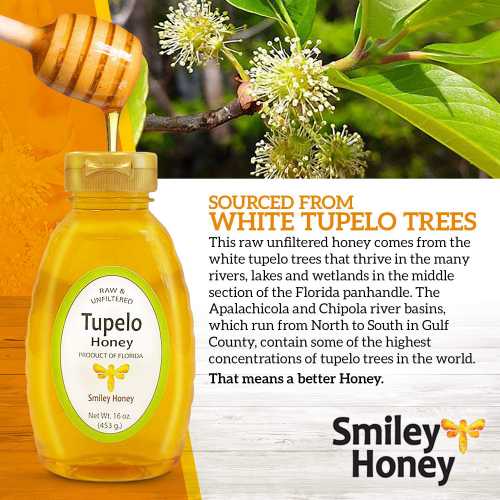 Above - A Tupelo Honey brand (Smiley Honey) shows off the flowers of the White Tupelo tree on the information about their Tupelo Honey.

The fruits which follow the flower are much more showy, and are referred to as 'ogeechee limes' owing to their juicy, acidic flesh.

Apart from its comparative rarity, the honey is said to be very aromatic, with a light color.  Floral, fruity and spicy are words that may be used to describe the flavor.  It is one of the honey varieties favored by mead makers.

In a sensory study conducted for the National Honey Board, panelists ranked Tupelo Honey as having a high spicy, cinnamon aroma and flavor (Rtech laboratories, 2001).

Furthermore, there may be aromatic compounds unique to Tupelo Honey, or at least, not common in other honey varieties.

Finally, Tupelo Honey from the White Tupelo tree is always organic due to its habitat.

In 1971, singer-songwriter, Van Morrison, released a song mentioning Tupelo Honey.  Here is an extract from the lyrics:

- by  Van Morrison from "Tupelo Honey"

In the 1997 movie “Ulee’s Gold,” Peter Fonda stars in the title role, and it's about a Wewahitchka beekeeper and his family.  Whilst producing the film, the director consulted the Lanier family, a third-generation beekeeping family based in Wewahitchka, as well as filming on location at the Lanier family's bee yards and swamp lands.  Some members of the Larnier family even appeared as extras in the film.

Read About Honey And Acne