The Little Blue Carpenter Bee - Ceratina cyanea, is a tiny bee measuring only about 4.5 - 5mm in length, yet as a member of the Ceratina genus, it is a relative of the large carpenter (Xylocopa) group, both of which belong to the Apidae bee family1,2.

I propose that the name Ceratina cyanea probably means something akin to 'dark blue horned bee'.

My reasoning is that according to Wilson & Messinger-Carril; (authors of The Bees In Your Backyard1) the word 'Ceratina' is Greek for 'horned'1.

I have also discovered that the word 'cyanea' comes from Greek 'kyanos' (κυάνεια) which means 'dark blue'.

In any event, it seems that visually, this is a fitting name for this species, since these small dark bees have a dark, bluish metallic sheen to their bodies. 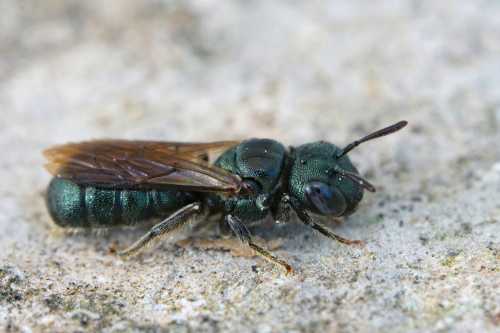 This species also has very little hair on their bodies.

As with other Ceratina, the Little Blue Carpenter Bee might be mistaken for the small Lasioglossum species such as the Turquoise Furrow Bee, Lasioglossum cupromicans.  However, close inspection of the abdomen will help distinguish between them.

Ceratina species have a 'club' shaped abdomen that is slightly wider at the tail end, and narrower at the thorax.

Females of the small Lasioglossum species have a point at the tail, whilst males have a proportionately long, slender abdomen.

Male Ceratina cyanea are a similar size to the females, but are easily distinguishable, having a white face, 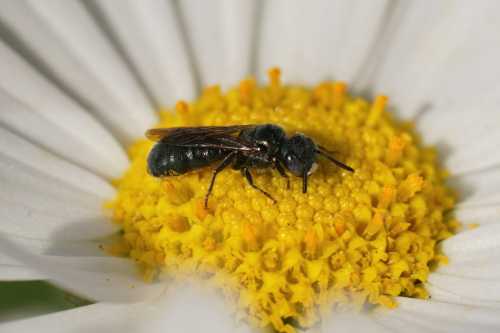 These little bees typically nest in hollow stems of plants such as roses and brambles.

These lovely little bees can be seen from May - September2 and may be seen foraging on:

The authors even suggest that Ceratina cyanea nests close to Sunflower fields are worthy of protection.

Sunflowers are a highly valuable crop.  Sunflower seeds are sold for oil and food goods, and whole stems are sold to the cut flower industry.

The Western Honey Bee, Apis mellifera, was the most frequent visitor of all insects captured in the study, and by some significant margin.

However, Ceratina cyanea came second, performing more visits than their larger cousins, Xylocopa species, and bees from both the Megachilidae and Halictidae bee families.

Moussa et al's study included a total of 32 insect species and 2744 recorded flower visits.  Below is a table extracting the data for the Hymenoptera species included within the study:

According to the study, Ceratina cyanea spent significantly longer collecting pollen than nectar.


The mean duration of a visit on a Sunflower floret was 3.62 seconds for nectar collection and 9.58 seconds for pollen collection.

The authors of the study also measured fruits and seeds from Sunflowers pollinated exclusively by the Little Blue Carpenter Bee, against Sunflowers protected from pollination.

For reference, the authors note that other studies have shown the impact of A. mellifera in India and in Cameroon on Sunflower pollination.  In India and Cameroon, the percentage of Sunflower seed setting resulting from pollination by Apis mellifera was 86.9% and 62.21% respectively).

Little Blue Carpenter Bee are found in Britain and Western Europe and in Northwest Africa.

This species, among other Ceratina, has also been recorded in Western Asia in Iran4.

1. Wilson & Messinger-Carril; The Bees In Your Backyard. Princeton University Press 2016.

2. Field Guide to the Bees of Great Britain and Ireland by Steven Falk, Bloomsbury 2015. 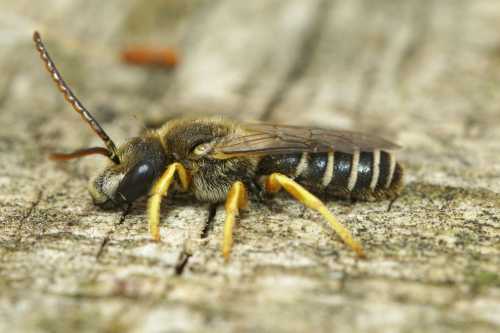