The Dufour's Gland In Honey Bees

The Dufour’s gland was identified in some insects by Leon Jean Marie Dufour in 1841.

It is an anatomical feature of the Apocrita – a sub-order of the Hymenoptera, that consists of bees, wasps and ants.

The Dufour's Gland In Honey Bees

What is the Dufour’s gland?
The Dufour's gland is specifically an exocrine gland.  The Dufour’s gland releases chemicals through a duct.  These chemicals can be external signals, or may have another physiological effect within the body itself.

For example, in humans the lacrimal glands (tear ducts and glands near each eye), and eccrine sweat glands (that release perspiration) are examples of exocrine glands.

Exocrine glands are different from endocrine glands, which release chemicals directly into the blood in humans.  The pituitary gland and the thyroid gland are examples of exocrine glands.

The Dufour's gland is located in the sting shaft in both queen and worker honey bees.

Does The Dufour’s Gland Aid Worker Policing Of Non-queen Eggs?

It has been proposed that the Dufour’s gland may play an important role in the ability of worker honey bees to distinguish between queen-laid eggs and worker-laid eggs, but has this theory been proven?

The concept of ‘worker policing’ (worker bees killing, removing or neglecting eggs laid by fellow workers) in honey bees has been recognised for some time.

For example, Ratnieks & Visscher (1989)1, Oldroyd & Ratnieks (2000)2, and Katznav-Godansky (2001)3 have all described the phenomenon in which worker bees are able to distinguish between queen-laid eggs and worker-laid eggs, and then destroy them.

This raises the question as to how honey bee workers recognize and distinguish between queen-laid eggs and worker-laid eggs.

Located in the ovipositor, could the Dufour’s gland somehow aid bees in worker egg recognition?

However, it has subsequently been shown to be more complex than that!  Why?
It is known that Dufour’s gland pheromones consist of two broad components:

Is ‘worker policing’ affected by one or both of these components?

This is an important question, because it is known that egg-laying workers can also produce the ester component of Dufour’s gland secretion (Katznav-Godansky, 2001).

However, this does not prevent the removal of worker-laid eggs, thus suggesting that the ester component of the secretion is not responsible for protecting the queen-laid eggs.

Martin et al (2002)5 also carried out some research to try to find out whether either of the two Dufour’s gland secretions were responsible for worker policing of eggs. They found the following ‘hierarchy of egg removal’.

Untreated worker eggs are removed more quickly than worker laid eggs with hydrocarbon treatment, which in turn are removed sooner than eggs with whole gland treatment, followed by those with ester treatment, and finally, queen laid eggs, which are tended by workers.

Below I have created a graphic representation of this hierarchy.

Hierarchy of honey bee egg policing and by workers 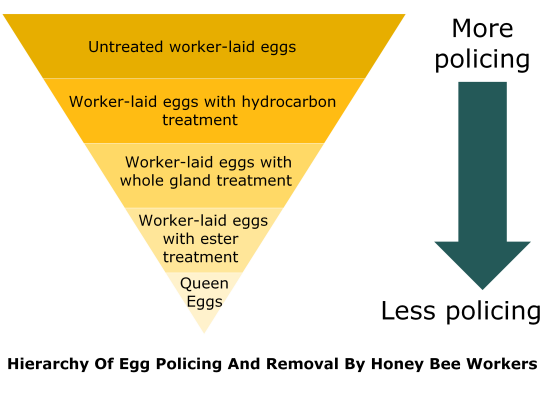 “The esters and hydrocarbons stored in the queen’s Dufour’s gland do not appear to be the signal by which worker-laid and queen-laid eggs are distinguished by policing workers under natural conditions.”

Katzav-Gozansky (2001)3 came to the same conclusion, and added further to the work in a 2002 review article6 by suggesting that the queen’s Dufour’s gland secretions are more likely to be a ‘queen signal’ that confirms to workers that there is a queen within the colony.

In connection with this function, some research (Dor et al, 2005)7 has shown that when a colony loses its queen, reproductive capability is initiated amongst worker bees.  It seems that the Dufour’s gland secretion may be an indicator of fertility.

Are honey bees native to Britain?