Are Honey Bees Native To Britain / The UK?

For honey bees to be considered native, these are some of the parameters frequently discussed around this question:

The question then is: do honey bees fit that description?  Upon examining the evidence, it is actually clear that the dark European honey bee, Apis mellifera mellifera is native to Britain, and still exists as genetically distinct populations in various parts of Britain today.  They are surely as deserving of conservation status as any other species considered 'wild'.

When did honey bees come to the UK / Britain?

Let’s first look at how honey bees might have come to Britain.

The first thing to point out is that almost all of Britain was covered in ice until about 13,000 years ago, with the remainder being a polar desert.  Therefore any arrival of bees would have had to occur after the full retreat of the ice, and after the subsequent adequate population of Britain by appropriate vegetation to ensure adequate nutrition.  Were these two things possible?  Did they occur?

It is known that trees capable of providing the necessary nest sites for wild honey bees were present in Britain from about 10,000 BC onwards.  Elm, hazel and oak trees were all abundant on mainland Britain by about 10,000BC.  Based on this evidence Crane (1999)1. concluded that honey bees could have been present in Britain before 7500 BC. This conclusion agrees with Limbrey's previous conclusion that honey bees arrived in Britain along with hazel and lime (Limbrey, 1982)2.

Although Britain is now an island, this was not always the case.  There was a land link to Europe from southern Britain until the English Channel was formed in about 8,000 BC.  There was also a land link that connected eastern Britain to the rest of Europe until about 6,200 BC Britain.  This area was known as Doggerland and effectively meant that Britain was a peninsula at the western edge of Europe.  Doggerland was submerged in about 6,200 BC (although it may have persisted for another two thousand years or so), leaving Britain as an island.

Clearly, if Britain was covered in vegetation by 10,000 BC and was connected to Europe by land until about 6,000 BC, this leaves about 4,000 years for bees to migrate into Britain of their own accord.  It is generally accepted (due to the work of Ruttner3)) that honey bees (the Northern Honey Bee or British Dark Honey bee – Apis mellifera mellifera) survived the last glaciations period in Southern Europe (e.g. Southern France and Spain).  There have been calculations done using assumptions about frequency of swarming and distance travelled from one nest to another with each swarm.  Based on these calculations, it would take bees about 1,000 years to travel from the south of France to Britain – easily possible for bees to do between 10,000 BC and 6,000 BC.

Thus, based on these factors and calculations, it is clearly possible for bees to have migrated on their own into Britain: the climactic conditions were suitable; the vegetation and habitat were suitable, and there was sufficient time for bees to migrate along land links before Britain became an island.

The Romans arrived in Britain in 55 BC.  It is sometimes claimed that honey bees were brought to Britain by the Romans, and thus can be considered as non-native.

However, on investigating this assertion, Carreck (2008)4 makes the following point:

“Although it has been claimed that the Romans brought bees to Britain, there appears to be no documentary evidence for this.

The only written reference to beekeeping or honey in Roman Britain seems to be a reference (c. 100 AD) to lini mellari, a beekeeping cloth of some kind, perhaps used to cover a hive or to strain honey, included in an inventory of items at Vindolanda, Northumberland (Crane, 1999).

Finally, we must not forget the Greek explorer Pytheas of Marseilles (c. 300 BC) who wrote that the inhabitants of Thule prepared a drink of grain and honey (Fraser, 1958). Thule has been variously placed by later historians as north of Great Britain, possibly the Orkneys or Shetland Islands.”

Carreck also points out that the Romans never occupied Ireland, but ancient texts nevertheless refer to the practice of beekeeping and the presence of wild honey bee colonies:

“The Bechbretha or Ancient Bee Laws of Ireland, said to have been codified by St. Patrick in 438 – 441 AD, were more probably first written down in the 7th century, but importantly are not laws as such, but legal judgements passed down in the oral tradition and which clearly date back many centuries (Ryan, 2005). The judgements indicate that there were wild colonies of honey bees in woodland, and also hives managed by beekeepers.”

Are honey bees invasive in the UK?  Do honey bees out compete native wild bees?

Personally, I have never seen any robust evidence to support this.  It is true that I have seen research presented as evidence, but none that was as conclusive as it was trumped up to be.  Indeed, a Canadian research team vigorously examined the research on this subject, and largely came to the same conclusion.

It is true that in Britain there has been a surge in beekeeping due to interest in bees, but that surge had followed a historic decline for quite some years, with fewer and fewer people entering into the hobby.  If honey bees were causing declines of wild bee species, it would seem logical that wild bee populations would have recovered, at least in part.  This did not happen, in fact, there were extinctions of some species.

The key threats to all bee species remain the same: habitat loss for a variety of reasons, land management practices and loss of flower rich wildflower meadows and spaces, the destruction of forests, woodlands and wild hedgerows, and agrochemical use.  These are the key issues that need to be addressed as they will surely help all bee species, along with other invertebrates and wildlife.

That said, I am in favour of beekeepers practicing caution when deciding where to locate there hives.  I discourage beekeepers from setting up hives around ecologically sensitive areas that may be important for vulnerable wild species.

Can honey bees survive in Britain /the UK without human intervention (i.e. without beekeepers)? 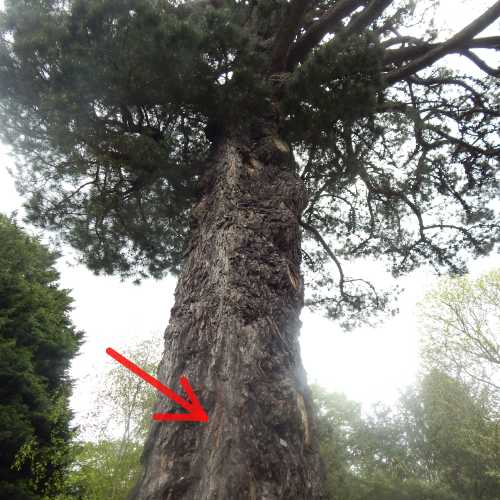 Above - as indicated by the arrow, the location of a wild honey bee nest.

I have often seen it proposed that without beekeepers to provide hives and supplementary feeding during winter, honey bees could not survive in the wild.

This is completely false.  Even some of the relatively recent newcomers (imported to supplement UK stock, and possibly crossed with Apis mellifera mellifera or other imports) have been observed to thrive in the wild, including surviving and foraging during winter months and without human interference or assistance.

Thus, honey bees have continually survived and continue to do so.

There are a number of species considered to be wild in Britain, and therefore, often presumed to be native.  However, they are very recent arrivals. These recent arrivals include species of bumble bee and solitary bee examples include:

Thus, if we look again at our earlier definition of ‘native species’ then we can suggest that honey bees are native: it is likely that they arrived without human help; they have been here since before recorded history began; they are integrated fully into the environment; and they could, and do, survive without human help.

Perhaps we could equally ask the question: are bumble bees native to Britain, and what about solitary species?