The short answer is:
Yes, honey bees poop, and the activity of bees pooping has been observed by scientists, beekeepers and nature watchers for a variety of bee species.

As with humans and other creatures, the act of defecating (releasing poop from the body) is important for bees, because it's a valuable bodily function for expelling undigested food wastage from the body.

Where do honey bees poop?

Adult worker honey bees are hygienic, and poop outside the hive .  Even in winter when worker bees cannot leave the nest or hive to forage, worker honey bees hold on to their poop, and take what is known as ‘cleansing flights’ when they can.  These are short flights (winter weather permitting) when they leave the hive in order to poop.

Does the queen honey bee also poop?
Yes, the queen also poops, although her poop is cleaned out of the hive by the workers. 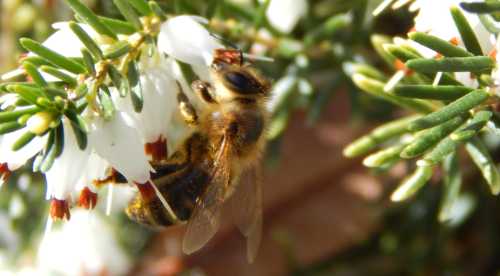 Healthy honey bee poop is yellow in color, and is somewhat sticky.  It might appear as yellow droplets, a sausage shape or 'splat'.

Beekeepers who recognize bee poop may see it on their windowsill, garden furniture or car.  People who live close to a regular honey bee flight path may also see bee poop (although they may not know what it is).   In cooler weather, honey bee workers may poop on the beehive itself, since they are less likely to fly far from the hive.

What is honey bee poop made of?

Honey bee poop has been found to primarily contain bits of undigested pollen fat, pollen grains from flowers visited, and other waste.

I'm not aware of it being harmful in any way to humans or other animals.

No.  Honey is mostly made from nectar collected by honey bees during foraging trips on flowers.

The honey bee takes the nectar back to the hive in its crop, where it is passed from bee to bee, whilst adding the bee’s own ingredient (the bee enzyme) before it is deposited into a cell made of wax where it will be turned into honey.

Read more about this process: how bees make honey.

Do honey bees get diarrhea?

Yes.  Honey bee dysentery is a type of diarrhea that honey bees may get1, for example, if they have too much poop in their bodies, and are struggling to get out of the hive in the winter to take cleansing flights so they can get rid of it.

4 Interesting facts about bees and poop!

Did You Know?
Honey Bees Have Hairy Eyes!