Do Bees Fly At Night?
Can Bees See In The Dark?
Which Bees Are Active At Night?

People are often curious about the activities of bees at night.  This topic is the subject of scientific investigation.  Here, I’ll draw on some of the research (listed at the end of this page) to answer questions such as:

Do bees fly at night?
The short answer in summary...

Below is further information to build on the basic facts outlined above - please see the end of this article for published research  papers.

Are 'Night' And 'Dark' The Same Thing?

When we ask 'do bees fly at night' and 'can bees see in the dark', what do we actually mean by ‘night’ and ‘dark’?

'Night' and 'dark' mean different things to different people.  Therefore, we should consider what we mean by night time, and whether we mean total darkness, or at least some light.

A creature may be nocturnal in its habits (active at night), crepuscular (active during dusk and dawn – i.e. twilight); or diurnal (active during the day).

Most bees are diurnal, however, there are exceptions, with a small number of bees being crepuscular or nocturnal.

As far as we are aware, nocturnal or crepuscular bees are mainly tropical species.

Interestingly, a number of tropical wasp species have also evolved this lifestyle.  Such bees (and wasps) are able to fly and navigate through a dark forest between their nest and target foraging site.

However, to quote scientist and researcher, Eric Warrant (see ref 1 below):

“Despite being nocturnal…..light levels– and by implication visual reliability – nonetheless limit foraging activity in bees and wasps active at night (Kelber et al., 2006). Some species are clearly crepuscular, requiring slightly brighter twilight skies to see well enough to negotiate obstacles during flight and to find their way home following a foraging trip. Those that fly all night often require the presence of bright moonlight.

Light levels are thus limiting – a species capable of visual foraging in the early dusk may be forced back to the nest just a short time later before light levels have become unacceptably dim.”

Nocturnal and crepuscular (dusk and dawn) foraging activity in bees has arisen independently in at least four of the nine recognised families of bees, namely in

Examples of species known to be crepuscular, include

The sweat bee Lasioglossum (Sphecodogastra) texana is primarily diurnal, but has been found to be capable of foraging at night with adequate moonlight (as least half full moon). 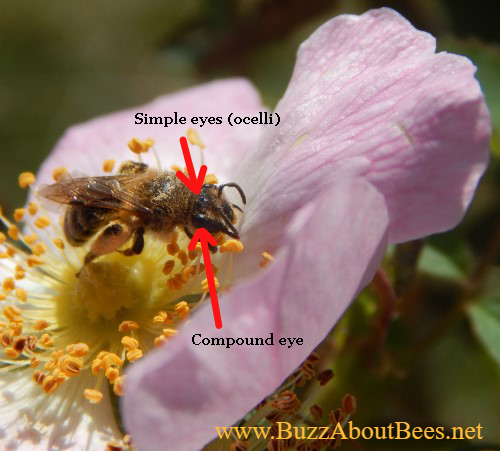 You can read more about why bees have 5 eyes.

In night flying bees, the limited amount of light available, has resulted in the evolution of proportionately larger compound eyes and ocelli.  In particular, the three ocelli (which are sensitive to light) are significantly larger relative to body size in species that fly in dim light, compared with the ocelli found on daylight foraging (diurnal) bees.  (Kerfoot, 1967b; Kelber et al., 2006; Warrant et al., 2006).

For example, in the giant nocturnal Indian carpenter bee (Xylocopa tranquebarica) they measure almost a millimetre across, yet the ocelli of the similarly sized diurnal (daylight active) species X. ruficornis are significantly less than half this size.

The compound eyes are also a little larger in nocturnal bees, but the relative difference in comparison with diurnal species is less pronounced.

Do honey bees fly at night? 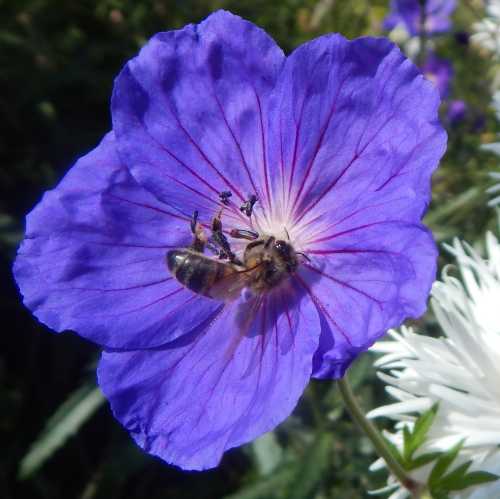 Above - Apis mellifera - the Western honey bee is diurnal (active during the day), but there are a couple of honey bee species known to be capable of flying out during moonlight.

Two species of honey bees (Apidae, genus Apis) are diurnal, but – like Lasioglossum (Sphecodogastra) texana mentioned above, are known to be able to fly out if there is adequate moonlight, and these species are

Why are some bees active at night / in the dark?

Some of the reasons why a species may have evolved the ability to forage at night or in non-daylight hours, are thought to be as follows: