The honey badger - Mellivora capensis - or 'Ratel' is a mammal native to areas of Africa and Asia. It is part of the weasel family which includes skunks, ferrets, otters and other badgers.  The honey badger diet is varied and includes insect larvae and the young of ungulates (hooved animals)1.

The honey badger was at one time considered to be primarily an omnivore (eating foods of both plant an animal origin), whereas research has shown it is primarily a carnivore2 (a meat eater) although it will eat fruits such as melons for their moisture during times of drought or when sources of water for drinking are scarce.

Honey badgers are known to raid wild honey bee nests and bee hives.  During the raid, honey badgers will inevitably eat some of the honey that bees have made and stored in combs.  However, research shows, that despite of its common name 'honey badger', what the Ratel is really after is the brood (the larval form of bees) inside the hive or nest1.

The developing young provide a rich source of protein for hungry honey badgers, which are happy to brave a few bee stings to get at it.

In other words, whilst honey badgers will indeed consume honey from a bee hive, it has been discovered that the primary motive for raiding honey bee nests and hives, is to get at the larvae, not the honey.  However, this video makes for entertaining viewing:

How do honey badgers get at the honey bee nests?

Wild honey bee nests often occur in the hollows of trees.  However, the honey badger has strong claws for grasping at the bark of tree trunks, and are able to climb in order to get to an elevated nest.

Do honey badgers get stung when raiding honey bee nests or hives?

Yes, honey badgers do get stung, however, their physical characteristics, mean that they are able to withstand a number of stings before, enabling them to get to and consume at least part of the brood (and any attached honey) before moving on from the nest.

In particular, honey badgers are thought to be highly impervious to bee stings due to:

The honey badger is also renowned for its fearless characters.

However, honey badgers will ultimately move on from nests once they have had enough of the stings!

In regions of Africa, bee hives are being used to prevent elephant-human conflict.  Elephants are afraid of bees, such that farmers position bee hives around crops to deter elephants trampling their crops.

However, beehives present opportunities for honey badgers, and 40% of participants in one study in Tigray, Ethiopia, ranked the honey badger as the most serious pest facing their beekeeping community4   such that beekeepers even admitted to killing the honey badgers, despite them being a protected species3.

The good news is that beekeepers are finding innovative ways to protect their hives without harming the badgers3.  These include:

Probably not.  Furthermore, only one species of honeyguide bird had been proven to lead humans to honey.  You can read more on my page about the Greater Honeyguide bird.


How one reader created a racoon-proof 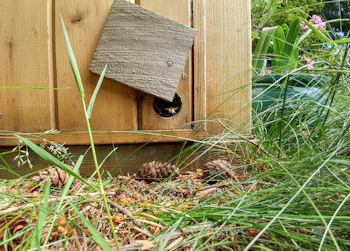 4. Gebretsadik, T. (2016). Survey on honeybee pests and predators in Sidama and Gedeo zones of Southern Ethiopia with emphasis on control practices. Agriculture and Biology Journal of North America, 7(4), 173-181