Do Bees Sting Watermelons, And If So, Why?

Is there truth in the idea that bees cause markings (scratches or webbing) on watermelon flesh (through stinging or pollination) and that this indicates sweetness?

Most of the queries I receive about bee stings, tend to come from visitors with bee nests in their homes.  Then I received a query regarding watermelons and bee stings, which provoked a whole investigation:

Question:
I read that to choose a watermelon that's really sweet, we need to look out for bee stings on the outer flesh.  Please can you explain to me why bees sting watermelons?
- Courtney, USA

The short answer is:
There is no evidence that bees sting watermelons and cause a mark on the outer flesh that signifies sweetness.  However, it may be that pollination by bees affects the sweetness of watermelons.

Do Bees Actually Sting Watermelons, And Does This Indicate Ripeness And Sweetness Of Fruit?

I was intrigued by this query, and after doing a little digging, I found there were two main theories floating around the web:

Firstly, there's an old wives tale that we should look out for marks left by bee stings on watermelons because it indicates ripe fruit.  I could not think of any reason why bees would sting fruit - and this would automatically exclude males, since they cannot sting in the first place.

The second idea states that we should look out for webbing marks on the outer flesh of the water melon, as these were a result of pollination by bees, and the more webbing marks found, the sweeter the watermelon.

I even came across a tweet from Pennsylvania Department Of Agriculture.  There are a number of watermelon growers in Pennsylvania (I counted 531 but this figure refers to 2016, and may be out  of date). 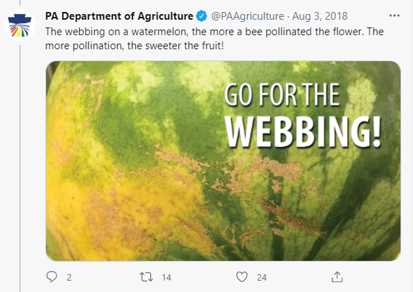 Are marks on watermelons caused by bees, and do they suggest a sweeter watermelon?

The tweet suggests a link between webbing markings on fruit, greater pollination levels and sweeter fruit.  But is this just marketing, or simply an incorrectly informed tweet from a social media marketer?  Where did the social media marketer seek out their information?

The USA is the 7th largest producer of watermelons, according to the organisation representing growers, that is the National Watermelon Promotion Board2 .  This means there are multiple sources of official information available over the web.

In particular, I decided to look for

It seems to me that these are the most reliable resource to check the claims made.

If markings on watermelons indicate sweetness, and if those markings are caused in some way by bees (whether by pollination, or bizarrely, bee stings) then the growers and the organizations and bodies that advise them, will know about it and will be talking about it somewhere.

A summary of findings

Through my investigations I have found:

Now I'll expand on each of the points above.

It's clear that farmers rely on bee pollination in order to successfully grow watermelons, and it seems that pollination by bees results in sweeter watermelons, however, this has nothing to do with bees stinging the fruit.

There is evidence that links pollination by bees with watermelon sweetness.  This is perhaps no surprise, as the similar connections have been made with other fruits.  For example, studies have directly demonstrated a link between bee pollination and fruit sweetness in apples.

An article from the University of Delaware states that following successful pollination by bees, cells in the watermelon fruit divide to give the potential fruit size, after which, cells expand and fruit enlarges as sugars accumulate. This may imply a link between the sweetness of watermelons and pollination by bees.

The University of California (David) Vegetable Research And  Information Centre produced a document in which they outline a problem diagnosis for watermelons.

Notably, they state that lack of pollination can result in low fruit set, bitterness and misshapen fruit.  (Lack of sweetness may also be down to soil quality).  Bitterness is the opposite of sweetness, so it would seem that the absence of bee involvement could result in bitter fruit.  This would mean that bees are partly linked, at least indirectly with fruit sweetness. From the document2:

The University of California also produced a PDF concerned with watermelons, in which they mention the importance of bee pollination with regard to fruit shape2:

"POLLINATION
One to two bee colonies per acre should be placed in the field when male flowers begin to appear. Poor pollination often causes misshapen fruit.

A watermelon plant seldom produces more than 2 to 3 harvestable fruit. While it is too expensive to remove all excess fruit, misshapen and split fruit may be culled in the field to allow the plants to channel nutrients into marketable fruit.

Care must be taken to prevent the bee colonies from being exposed to pesticides."

Do 'webbing' marks mean the watermelon is sweet, and do bees have anything to do with it?

I can find no scientific evidence, nor guidance for growers suggesting that webbing on the flesh of watermelons is related to pollination by bees.  Nevertheless, official bodies and academics do offer guidance on harvesting and selecting ripe fruit for growers and shoppers.

How to choose a sweet, ripe water melon

The National Watermelon Promotion Board provides advice on selecting a watermelon for ripeness2.

They advise us to:

It is notable that they don't mention anything about webbing marks caused by bees or pollination as an indicator of sweetness, yet we could surely expect them to add this to their advice if it were the case.

Likewise, an expert from Purdue University and former plant pathologist, Daniel Egel has outlined a number of tips on selecting watermelons for ripeness4 (and hence sweetness).  In particular, he advises:

Again, it's notable that there is no recommendation to look for webbing marks or black dots as sign of pollinator activity (especially bee stings) and ripeness.