There are nearly 20 species of bird in four genera, that are called honeyguide birds.

This page is specifically about the bird known to lead humans to honey: the Greater Honeyguide bird (Indicator indicator)

The footage was taken in Western Gambia.

Where Do Greater Honeyguide Birds Live?

What Do Greater Honeyguide Birds Eat?

They are also known to feed on a pest of honey bee nests and hives; waxworms, which are the larvae of the waxmoth (Galleria mellonella), as well as spiders and flying insects such as termites.

This is the most notable behavioural trait of the Greater Honeyguide. This behaviour is known in Biology as ‘mutualism’ – both species benefit from their co-operation.

In this case, the humans have an improved ‘honey bee nest finding’ success rate (and, therefore harvest more honey), while the birds get to eat the wax from the bees’ nest after the human honey hunters have broken it open.

Some communities in Africa have developed a complex relationship with the birds.

For example, Dr Claire Spottiswoode (2016) demonstrated how the Yao people within the Niassa National Reserve in Mozambique had developed a series of calls that significantly increased their honey hunting success. The honey hunters use a call (a trill followed by a short grunt) that attracts the Greater Honeyguide.

The birds, in turn, use a distinctive chattering call to attract the attention of humans, and flit from branch to branch to guide the honey hunters to a bees’ nest.

Spottiswoode showed that, by using their specific call to attract the birds, the probability of being guided by a bird was more than doubled (to 66%) compared to random calls.

Spottiswoode points out that the relationship between the hunters and the birds is particularly remarkable because “it involves free-living wild animals whose interactions with humans have probably evolved through natural selection, probably over the course of hundreds of thousands of years.” (Claire Spottiswoode 2016)

Although there have been claims that the Greater Honeyguide will also lead honey badgers to bee nests (thereby being able to feed on the wax honeycomb remaining after the badger has broken the nest open), this is debated.

Whilst it's possible the Greater Honeyguide may scavenge on the remains of honey bee nests attacked by animals, Dean et al, (1990) notes that there is no published evidence describing direct observations of birds leading badgers to honey bee nests.

Dean points out that, although there have been a few reports of honey badgers and honeyguide birds being seen at the same time in the same vicinity as bee nests, this is not scientific proof that the badgers have been deliberately led there by the birds.

There are a few films claiming to show the Greater Honeyguide directing honey badgers to bee nests, but their authenticity has been challenged, with assertions that the filming has been ‘set-up’ or edited to show something that was not genuinely occurring.

This is in clear contrast to Spottiswood’s research that demonstrates mutual signalling and cooperation between honey hunter humans and the Greater Honeyguide bird in Africa.

Honeyguide birds are ‘cuckoo’ birds – they are brood parasites. This means that they lay their eggs in the nests of other birds – usually one egg in a nest.

They seem to favour nests of bird species that nest in holes, but have been observed laying eggs into the nests of ‘bowl-nesting’ species.

They very commonly lay their eggs in the nests of bee-eater birds. The chicks of honeyguide bees have sharp hooks on their beaks, which is used to kill host chicks as they hatch (Spottiswoode, 2013).

It seems that honeyguide females incubate their eggs internally for an extra day before laying them (Birkhead, 2011), which ensures that their chicks hatch before the host chicks, thus giving them time to destroy their rival eggs (or hatchlings). 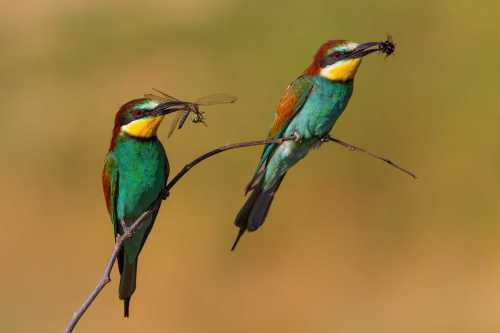