Dead Bees Along The Road

I received an email from a cyclist who was concerned about finding dead bees along the road.  The query was detailed, but it can be summarised as follows:

Question:
I keep finding dead bees along the road side and along pavements close to where councils have planted flowers (on roundabouts, in schemes, planters and containers at the sides of roads).  I wonder if the bees are being sucked into the wind stream or a sort of wind tunnel caused by passing vehicles, hence killing the bees.  Surely, councils should refrain from planting flowers close to roads, especially in towns and cities?

Should Councils Stop Planting Flowers Near Roads And On Roundabouts, Especially In Towns?

In a sense, it is a dilemma, because, many roadsides, roundabouts, verges etc, provide planting space for flowers important for foraging bees.  However, the provision of flowers  is vitally important to sustain bee populations, and here is an explanation. 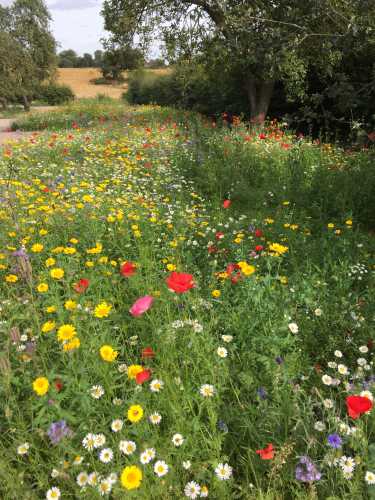 This mass of wild flowers is actually located on the outside of a busy car park, where cars may park right up to the flowers themselves.

I can understand the sight of dead bees along the road sometimes will be upsetting, and I think this probably happens for the reasons described (bees ultimately becoming the casualties of vehicles).  However, if those flowers were not there, the situation would be worse, and I will explain why.

There is no end of research - not least, a report from the IUCN which analysed masses of research data to find out why bee numbers have been declining, and the answer was overwhelmingly habitat as the main problem - i.e. provision of food (flowers) and nest sites for bees.

This is important, because if there is insufficient food from flowers in a locality, bumble bees for example, will raise smaller colonies, and there is no guarantee that the smaller colony will thrive.

For one thing, smaller colonies are more vulnerable if there is a nest parasite or other enemy attack, or indeed bee parasite, or misadventure whilst out foraging, such as being captured in a spider web or eaten by a bird - or indeed, vehicle collision.

Alternatively, bees get forced in to flying further distances, using more energy, and potentially exposing themselves to even greater risk of predation, accident, misadventure.

This is why colonies are better off if they are stronger and more robust with more members.  If there are not enough bee friendly plants, bees won't get to that stage in the first place because the queen will automatically rear fewer young, and you won't see dead bees around, because there were hardly any to start with.

Yes it is true, bees will become casualties in vehicle collisions because of flowers being close to roads (and that is certainly upsetting), but not all of them will die.  An example of this is to look at London. There has been a huge surge in beekeeping in London, such that beekeepers fear there will not be enough flowers for all the honey bee colonies, let alone the wild species.  They want people to plant yet more flowers, despite all the busy roads etc.

There are other issues of course in cities, such as pollution, but this is helped by people not using their cars so much.

I actually live on a fairly busy housing estate with quite a lot of traffic.  I have flowers in my front garden, and some of the bees that land on the flowers could easily then be killed by a passing vehicle.  Equally they could die because of a neighbour using chemicals.  I keep planting, because I have seen a population increase of certain species, such as leafcutters, hairy footed flower bees, various bumble bees and wool carder bees, so I know how valuable it is.

My small garden, along with other gardens in the area, provides needed feeding stations for bees.  This is what town council planting schemes are doing.  If they did not provide flowers, what would it look like and what would be in its place?

Even planting flowers unattractive for pollinators would not help.  This is because research shows inexperienced bumble bees sometimes investigate flowers of no value whilst they learn how to become efficient foragers.  Alternatively, we could have concrete in some form which would be worse.  I feel dismay every time I read of more housing or building development on a bit of green land.   More concrete = more flower loss = fewer bees.

The answer is, ever more flowers, and less vehicle usage, especially for unnecessary journeys.


Some of the dead bees will have died from natural causes.  Bumble bees only live a few weeks (although they have a lot to achieve in that time!).  This is part of the natural life cycle of bumble bees.

If you travel along the highways and busier back roads you'll see - at least at various points, wildflowers, hedgerow and shrubs along the road side, creating pollinator corridors.

I am not only referring to the tall wild flowers, but the low growing ones that people often do not notice, such as clover, and bird's foot trefoil, both of which are important for bees.  This provision of flower and hedgerow is also vital for birds and a variety of different invertebrates, and no doubt small mammals.

Now you may think that this is a very different scenario from the town, but in fact, it is similar in a sense in terms of exposure to vehicles.  Grassy verges stretch up to the edge of roads, and very close to it. Yet grassy verges are seen by many conservation organisations as being vitally important, because they help to link flower habitat and hence bee populations (hence helping to avoid, for example, inbreeding in bumble bees).  The alternative might be yet more concrete, which ultimately in one sense, kills more species even than passing vehicles will do.

Lockdown has been very painful for many, but in one sense, I hope one advantage might be a little less traffic.  Indeed, at least less traffic in the morning, as more people are allowed to work from home.

Flowers and plants for bees though, are always important, so I have learned it is better for us all to keep doing what we can within our own sphere of life.  Our own gardens, yards, hanging baskets, plant pots, lawns etc.