Some spiders hide, and are well camouflaged in the flowers and plants on which they lurk, such that not only are they easily missed by the human eye, their unsuspecting target prey is unwittingly caught out as it goes about its business.

Below, you can clearly see the salmon/reddish-pink stripes and long, pale legs of the candy-striped spider, Enoplognatha ovata. This particular spider has caught and trapped a honey bee (Apis mellifera), which is now dead - inside a pink Japanese anemone flower - a popular flower with bees and other pollinators.

The tongue (proboscis) of the honey bee is extended.  Bees stick out their tongues as a reflex when they are about to suck nectar from nectaries.  This bee may have been caught just as it landed to feed on the nectar inside the flower. 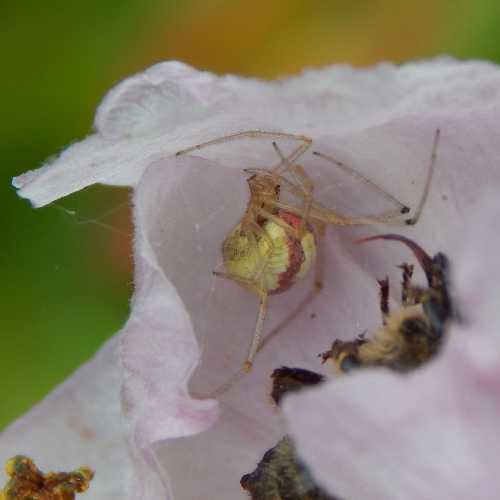 Above: A candy-striped spider with its honey bee prey.

Elsewhere on my site, I explain how it is possible to rescue trapped bees from spider webs.  However, not all spiders use webs to capture bees - for example, the crab spider - Misumena vatia, simply awaits (camouflaged) in flower heads ready to pounce on unsuspecting pollinators as they visit to gather nectar and pollen.  The poison from the spider venom acts very fast, and these spiders are rather deadly, especially for smaller bee species.

Other spiders have a sort of 'in-between' strategy for catching their prey, which typically includes all kinds of pollinating bees and flies, as well as small beetles such as the ladybird (or ladybug if you prefer). 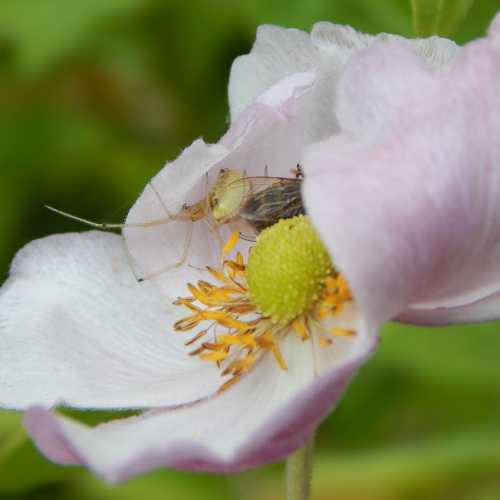 Side view of the candy-striped spider, as it lingers by the body of the honey bee.

The candy-striped spider, Enoplognatha ovata, is one such spider.  This small spider with an oval pea-like body, does not create a web to first trap the bee, as is the case, for example, with the garden wolf spider.  Instead, like the crab spider, it pounces on its prey, but uses a fine piece of cobweb to help subdue it.

I have noticed that petals might be curled over the prey in the process.  Indeed, leaf curling is a strategy used by this spider to protect its egg-sac.  After mating, the female of this species rolls up a leaf where it deposits and guards the egg-sac until about September time, when its offspring will emerge, and the female abandons guard duty, and soon dies. 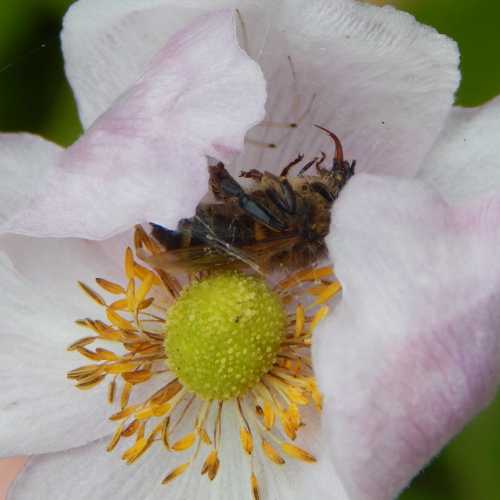 Candy-striped spiders use a fine piece of silk webbing to help secure their prey following attack.

What are the key characteristics to look out for that will help you identify Enoplognatha ovata?  There is some variation with this spider:

Below, the underside of the spider can be seen, revealing a single dark thick stripe. 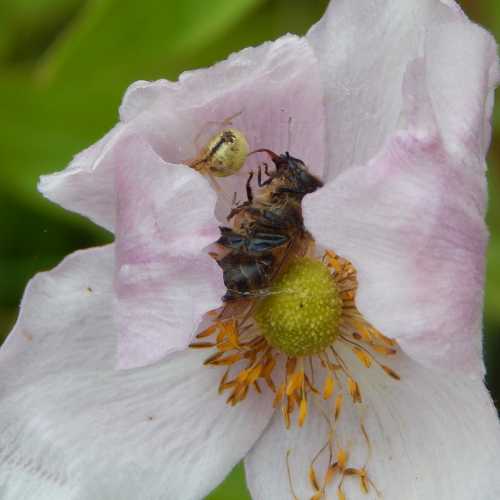 Image shows the underside of the spider.

A good look at the legs (tibia) - if you don't mind getting so close - can help you be sure of you have identified the species correctly.  This species has black rings that are quite visible on the forelegs, as indicated in the image below. 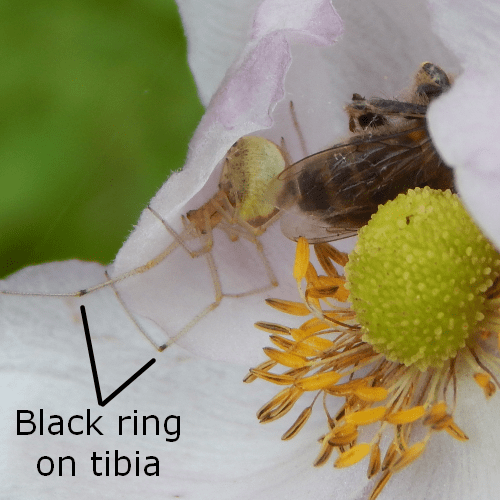 The dark rings on the legs (tibia) of the candy-striped spider assist identification.

Is it possible to rescue bees from this species of spider?

Although I explain (perhaps controversially) how and when it is possible to rescue bees from spider webs, crab spiders and candy-striped spiders that have caught their prey have got it for keeps.  A bee or other insect caught by these species cannot be rescued, although larger bumble bee species may be at less risk of attack.