Andrenidae exist almost worldwide1,2, particularly in northern temperate regions of the world3, with Australia being the only continent from which they are missing4.

The Andrenidae is the largest of all the bee families.  Bossert et al (2021)3 note there are over 3,000 recognized (described) species, (Wilson & Messinger-Carrill state there are over 4,5004).

Michener’s classification (2007) recognized 41 genera within this family, although this is debated3 (see below).  As noted on my page Types Of Bees, Falk comments that the classification of bees is not especially stable6.

As you might expect from a family with such a large number of genera and species, there is tremendous variation in morphology and behaviour between species, but all the Andrenidae are short-tongued and have two grooves on the head below each antenna socket4.

The Andrenidae range in size from very small to very large (by bee standards!).  For example, the species Perdita minima is only about 3mm in length4, whereas Protoxaea gloriosa (from the Oxaeinae sub-family) is approximately 25mm in length4.

A number of species have a sting apparatus that is so underdeveloped that they are effectively unable to sting2.

All Andrenidae species are solitary5.

There are 3 subfamilies within Andrenidae family upon which entomologists agree:

In any event, the largest genus in this group is Andrena (also one of the largest bee genera in the world, despite the fact that they are absent from South America and Australia4).

Some species are generalists, whilst others are specialists, foraging on a very limited number of flower species. Species of Andrena are critical pollinators for a range of important tree fruit crops, such as apple.

The abdomen of Andrena species, when viewed from the side is ‘flattish’ in appearance. 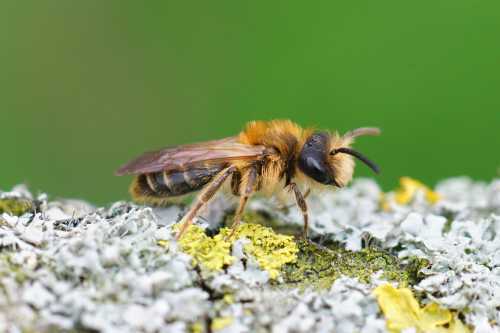 Example species include Andrena prunorum, a relatively common species in North America, whilst the tawny mining bee, Andrena fulva is distributed throughout Britain and Europe.

Panurginae
This subfamily includes the Perdita, which together with Andrena, comprise 80% of all Andrenidae species4.

Many Perdita species have unique hairs for collecting very specific pollens from a limited range of plants4. A few species forage at dawn or dusk – see Do Bees Fly At Night?

The only bees belonging to this group found in the UK are in the genus Panurgus (also known as ‘shaggy bees’.  Falk6 describes 2 Panurgus species in his Field Guide to Bees Of Great Britain And Ireland.

Panurgus are small bees, quite similar to Yellow-face bees (Hylaeus).

Oxinae
Wilson & Messinger-Carril4 note there are 19 species distributed in 4 genera, and they are only found in the Western Hemisphere.  A few species are found in the southern border of the United States (from the genera Protoxaea and Mesoxae) which are generally described as large, hairy, fast-moving bees4.

There are no Oxinae species in Britain.

There is variation in behaviour between different species within the Andrenidae family.

Andrenidae are a family of bees that are more commonly known as mining bees, and all species nest in the earth4, although nests can range from a foot or more to very shallow nests of just an inch or two below the earth’s surface.  One species (Andrena haynesi) has been observed in Utah creating a nest 9ft deep4.

The females of all species line their nests with a waterproof substance which serves to protect her offspring from moisture and bacteria4.

Some Andrenidae species will make fully solitary nests, while others will nest in aggregates in very close proximity to other nesting females.