There is perhaps some debate about which is the world’s smallest bee.

It's worth noting that new species are being discovered all the time, and I would not be surprised if the speed and rate of new discoveries increases in the future, due in part to the increased interest in bees generally.

What is the world's smallest bee,  what is its length and where is it found?

However, what can we say about the world's tiniest bee currently known to man in 2017?

Well, some resources state that it’s a species called
Perdita minima, from the family Andrenidae, and described by zoologist, T. D. A. Cockerell in 1923.  If not the world’s smallest bee, it is certainly one of the smallest, and the smallest bee in North America where it survives in the Sonoran Desert.

There are more than 650 species of Perdita recorded, and they are found only in North America.

I have not found any details as to whether the recorded length of Perdita minima is for the male or female bee, and certainly no recent published records.  This could be relevant in the debate about which bee is the smallest in the world, since it makes sense to compare like with like.

Why is this relevant?

Well, another bee recorded and described by Elizabeth M. Exley in the  Journal of the Australian Entmological Society 1980, (19: 161-170) is found in Australia, is a sub-genus of the Euryglossina, and is called Quasihesma clypearis.  The recorded male length is about 1.8mm, with a wing length of about 1.2mm.  The length of the female is recorded as being about 2.1mm in length, with a wing length of about 1.2mm.  Exley recorded bees in the north of Queensland and Northern Territory.  Quasihesma clypearis belong to the Colletidae family.

Exley's paper can be found by copying and pasting this link inot your browser: 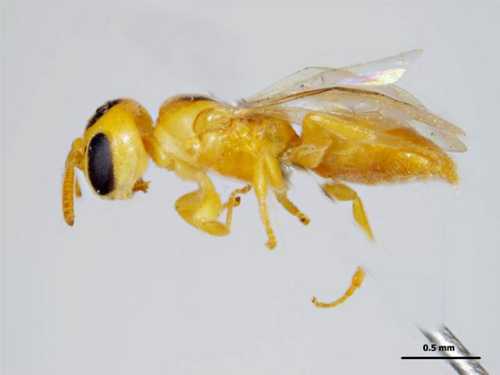 Anyway, regardless of which of these bees is the tiniest, they are both very, very small indeed!

For comparison, Chelostoma campanularum (sometimes called the Small Scissor Bee, or the Hare-bell Carpenter Bee) is one of Britain's smallest bees, and measures 4-4.5mm - still very small, but almost twice the size of the afore mentioned bees!

What is the name of the largest bee in the world?

Find out and read more facts about bees