The question is honey good for you?, can be considered from several different perspectives.

For example, if you are on a calorie controlled diet, then it is worth remembering that honey is high in calories, just as sugar is.

However, according to research, it appears honey has some antibacterial properties, that may be beneficial to human health.

So let’s take a look at this question from the following perspectives:

From a nutritional standpoint, it appears that within the context of human diets, honey has few minerals and vitamins, and offers little in terms of amino acids and protein.  The nutritional tables below show that, expressed as a %DV (Percentage of the ideal Daily Value) 100g of honey contributes only a small amount to the human diet as far as these elements are concerned. 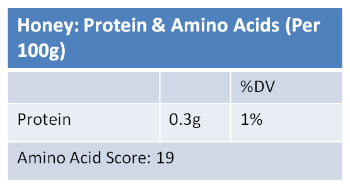 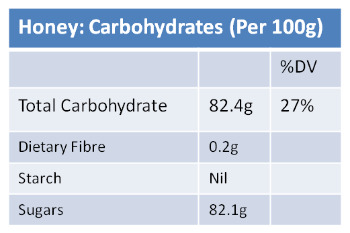 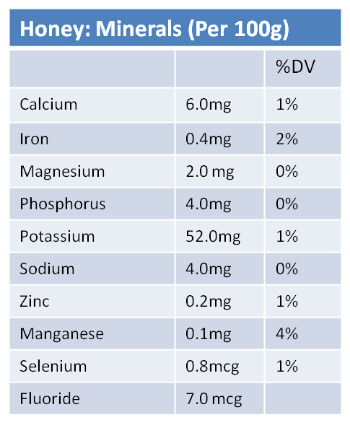 As you can see, 100g of honey would offer only a small percentage of an adult's daily recommended mineral in take which could be gained from other foods with fewer calories. 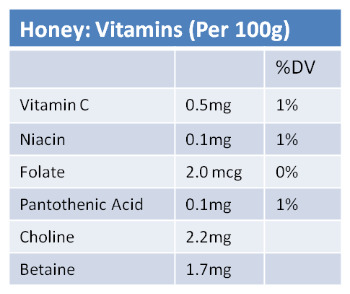 Fruits, vegetables and nuts readily available to humans, offer many vitamins and minerals without the calorie content.  After all, our bodies and diets are not comparable with that of honey bees!

Honey is primarily a carbohydrate (i.e. an energy food).  However, not all carbohydrates are the same.   The carbohydrate component of honey is primarily sugar, and even here, the ways in which sugars behave in the body varies.  Different sugars release energy at different rates, and this could be a relevant consideration if you are an athlete, and require a high energy diet.

On the one hand, honey offers an immediate energy boost due to the  Glucose content, which is absorbed quickly into the body. On the other hand, honey contains Fructose, which has a slower rate of absorption and so is useful for sustained energy.

Potentially then, honey may provide both an immediate and sustained energy boost to those engaging in sports, and in relatively small quantities compared with other foods.  From this perspective, it might be said that that honey is good for athletes and those engaging in high energy pursuits and endurance sports. Trials and studies may be needed to ascertain whether honey made a meaningful difference over sugar when engaged in sports.

You can read more about calories and carbs in honey here.

So is honey good for you if we look at wider health issues?

Below are some examples of research papers and articles looking at the potential medicinal benefits of honey - or at least, potential of honey within medicinal settings.

Please note, however, what we often lack is a comparison of honey with a more widely available and cheaper alternative.  For example, when looking at antibacterial claims and the use of honey, it should also be noted that simple sugar formulations can have significant effects.  Proof of this can be found in this published scientific paper (opens in a new window).

Manuka honey and Sidr honey were noted to be effective in killing 3 bacterias tested.

Results:  How Good Was Honey At Killing The Following Bacteria?

The authors also conclude that their findings may hold important clinical implications in the treatment of refractory chronic rhinosinusitis, with topical treatment a possibility.

"Honey was effective in killing 100 percent of the isolates in the planktonic form. The bactericidal rates for the Sidr and Manuka honeys against MSSA, MRSA, and PA biofilms were 63-82 percent, 73-63 percent, and 91-91 percent, respectively. These rates were significantly higher (P < 0.001) than those seen with single antibiotics commonly used against SA".

Scientists used heat treated, concentrated Egyptian clover honey for these experiments that were ‘in vitro’ (i.e. not conducted in the human body).

Various bacteria were isolated from human and calf stools, including E.coli, most of which have high anti-biotic resistance.

Concentrated honey was effective against E. coli.  In vivo, mice were used as a model for studying the parenteral (i.e. ‘inside the body’) usefulness of honey as an antibacterial agent against both pathogens. There was lower mortality (death) among mice treated with honey although the study states that parenteral application of honey and its therapeutic properties require further investigation.

Please note that studies in animals do not always produce the same results as in humans.

The scientists conclude that pure cotton flower honey can be used beneficially as an antimicrobial agent.

The researchers assessed the antibacterial activity of three locally produced honeys and compared them to three commercial therapeutic honeys (including Medihoney and manuka honey) in vitro, and using various concentrations of honey.

“Twelve of the 13 bacteria were inhibited by all honeys used in this study with only Serratia marcescens and the yeast Candida albicans not inhibited by the honeys. Little or no antibacterial activity was seen at honey concentrations <1%, with minimal inhibition at 5%. No honey was able to produce complete inhibition of bacterial growth. Although Medihoney and manuka had the overall best activity, the locally produced honeys had equivalent inhibitory activity for some, but not all, bacteria”.

Tested medical grade honeys, Manuka and Revamil (a honey registered as a medical device for wound healing, rather than being registered as an antibacterial).

Interestingly, this paper also discusses the need for standardized, medical-grade honey, thus avoiding differences in efficacy in the treatment of bacteria.  This is an important point, because if honey is to be used in a medical setting, medical staff need to be able to rely on the degree to which the treatment can help.

They demonstrate that Manuka honey has bactericidal activity at up to twofold to fourfold higher dilutions than Revamil honey against S. aureus, B. subtilis, and P. aeruginosa, while these honeys have identical activity against E. coli.

Honey may be good for you especially if you have wounds or burns.

They found that six of seven studies comparing honey to other treatments, both conventional and unconventional, showed it to be superior for wound healing, maintenance of sterility or eradication of infection.

five of the studied they reviewed were conducted in patients with partial thickness or superficial burns involving less than 40% of the body surface. Comparators with honey were polyurethane film, amniotic membrane, potato peel and silver sulphadiazine. For some or all outcomes honey was superior to all these treatments. Time for healing was significantly shorter for honey than all these treatments.

See Ref 2 at the bottom of the page.

Is Honey Good For Babies And Children?

Honey must not be given to infants under the age of one year, due to the risk of botulism.  However, pre-cooked foods containing honey are acceptable, such as honey coated serials. Honey may be given to older children.

Also, please be aware that honey is made of sugars, so please ensure you look after your children's teeth.  I would be very wary of any claims made that honey is beneficial for teeth!   See below!

Is honey good for teeth?

I find any claims that honey is good for teeth to be rather strange!  Honey is basically sugars.

The supposition is that because honey has antibacterial properties (in so far as, it creates an environment hostile to bacteria), it will therefore help your teeth.

However, please note, that sugar in general (e.g. table sugar), also creates an environment hostile to bacteria, but that does not mean it helps the teeth!  On the contrary, we know it doesn't!  In other words, a product having antibacterial properties is not, on its own, proof that it will help the teeth!

Is Honey Good For Diabetics?

Contrary to this popular myth, the answer is ‘no, honey is not good for you if you have diabetes’.  Sugar is sugar at the end of the day, and in terms of those monitoring their sugar levels, including diabetics, honey is to be treated as any other sugar.

If you have diabetes and are monitoring your diet, it would be better to select other sources of carbohydrates that are low in sugar, such as fresh fruit.  Read more about honey and diabetes.

Is honey good for you if you're on a diet?

Dieters beware! Honey is high in calories, and so is not suitable for a low calorie diet.  If, as a dieter, you wish to replace a teaspoon of sugar with half a teaspoon of honey, then that's a different matter, but eating lots of honey won't help you lose weight.

However, there are some interesting theories about diets containing honey - primarily because of the partner ingredient, such as the vinegar and honey diet.

Perhaps honey is good for you due to its anti-bacterial properties, although I'm not aware of any conclusive evidence from studies in humans that eating honey prevents bacterial infections inside the body.  However, seeing the research above it looks like this could be worth investigating.  There appears to be evidence that certainly, honey is very good for killing bacteria if applied topically.

Bees need our help.  If you are keen to purchase honey, please try to buy it in a way that supports ethical practices.  See honey buying tips.


Go from Is Honey Good For You? to explore the reasons for bee decline.

Go from Is Honey Good For You? to explore the proposed benefits of bee pollen.