How To Rescue A Bee From A Spider's Web

Here are a couple of queries I had about helping bees trapped in spider webs:

"I rescued a bee from a spider's web, and now it's covered in cobweb.  Help, what can I do?"

I receive such queries every year.  Often, the visitor will have read my account of rescuing trapped bees. 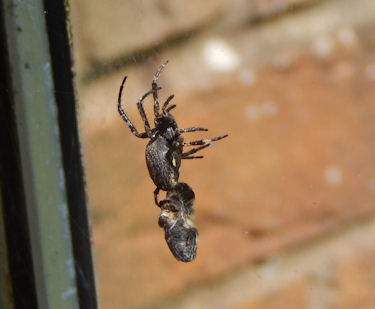 It was too late to rescue this bee - but very often, it is possible to help a bee trapped in a spider web.

Anyway, the page I wrote previously gives no instructions about how to rescue bees from cobwebs.  That particular page is more about my dilemmas:

I'm sure many conservationists and arachnid fans will be horrified and appalled, but if possible, I always end up freeing the bee if I can.

A couple of days before writing this blog, I saw a marmalade hoverfly land in a web.  In a flash, a large spider dashed out of a corner, and bit into it.  Obviously the fly posed no threat at all to the spider.  This can happen with small bees too, but I think bumble bees - especially larger specimens, stand a better chance against spiders.

Spiders appear to approach bumble bees more slowly - I could perhaps even say 'with caution', probably because of their size and sting.  Our smaller, delicate pollinator friends are more vulnerable.

Anyway, at the risk of upsetting spider fans, I'm afraid I'm going to provide some guidance here about how to rescue bees from spider webs.

Rescuing a bee from a spider's web - steps to take 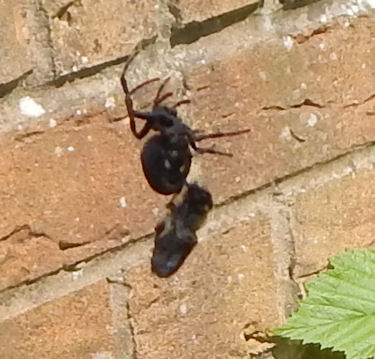 Another picture of the same spider (above) - it was in my greenhouse. It had already 'parcelled up' the bee before I arrived.

"The bee is loosely covered in cobweb (but not completely wrapped up), what should I do?"

If this happens, remove the bee from the web, but do not attempt to remove the cobweb from the bee, because limbs and wings can become accidentally damaged.

Remember that the legs and bodies of bees are covered in a fine trace of oil.  This will help them to groom away the cobweb on their own.

The bee will clean the web from itself if freed.  I have observed this plenty of times.

Even if you notice a piece of cobweb which is especially troublesome, perhaps even slightly 'dangling' from the bee, resist the temptation to panic, and 'help' the bee.  It will sort itself out in time.  As the bee removes the cobweb, it may start buzzing furiously. At this point, rescuers might panic and think the bee can't free itself, and that's when it's tempting (albeit with good intentions) to interfere a little too much.

Resist the temptation to 'help' - it can manage and is doing this with a purpose - it may even decide to have a little 'rest' before cleaning.

How long does it take for a bee to clean itself?

I describe a scenario below - it took about two and a half minutes for the bee to clean away the remains of spider web on its body, limbs and wings.

"I used a stick to rescue the bee, and now the bee is entangled on the stick with cobweb, what shall I do?"

If you have used a stick or something similar to free the bee from the cobweb, and the bee is still attached to the stick by a little piece of web - then place the stick gently on the ground out of danger.  The bee will get on with cleaning itself, then fly off.

"Should I feed a bee I have just rescued?"

No.  Let the bee clean itself and get on with foraging.

Elsewhere on my site, it is true that I suggest offering a little plain sugar water to very bedraggled bees that need a little more TLC and shelter from very heavy rain, and approaching night time.  However, ordinarily I would suggest that allowing bees to feed naturally on nectar and pollen is much better for them.

Bumble bee entangled in cobweb in the greenhouse

A couple of days after I received the latest query about this issue, I was in the greenhouse, pruning the tomato leaves with a pair of scissors, when a buff-tailed bumble bee (Bombus terrestris) flew in.  Very quickly, it got itself entangled in a piece of web attached to a tomato leaf.  I clipped off the leaf and took it outside.

The bumble bee had cobweb on one of its wings and two of its legs.  I was keen to double check that yes indeed, my advice is correct, so I stood and observed the bumble bee, resisting all temptation to "help" it remove the cobweb from its limbs, even when it would have seemed easy to 'break' a piece of web attached to the leaf.

All in all, it took about two and a half minutes for the bumble bee to clean itself up, and fly off.

On a number of occasions, I have watched bees entering and leaving their nests, the entrances of which are surrounded by cobwebs, and yet the bees have managed to avoid getting trapped.  I have witnessed this with both bumble bee and solitary bee nests.  Presumably, the spider gets lucky at least sometimes.

I suspect the bees make their nests before the spiders create their webs, but I cannot say this is definitely the case.

I tend not to remove such cobwebs, although I certainly remove cobwebs in my greenhouse when I notice them. 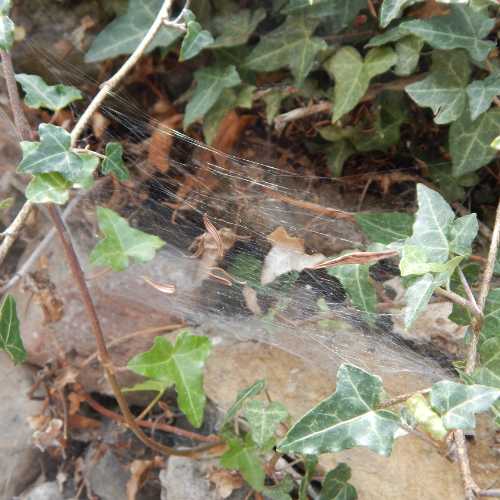 This spider web is actually very close to the entrance of a bumble bee nest directly beneath it, in a hole in the wall - indeed, the walls nearby have many cobwebs and solitary bee nests too!

Is it fair to deprive a spider of a meal?

It's a tricky dilemma for me personally, because ordinarily, I'm always in favour of allowing nature to take its course, and spiders perform their own important role in the ecosystem, but I must admit, I find myself rescuing bees from spider webs in our garden every now and then.  I don't think our local spider populations are suffering.

It's also true that I find spiders can be fascinating to watch, and their webs are a work of art, especially appreciated when decorated with droplets of dew.

It also amuses me when I'm in the garden, and I see a very fine strand of cobweb floating on a gentle breeze, with a teeny, tiny spider at the end of it.  It's how that spider manages to extend its web in the first place.

But I must admit to feeling the creeps when I see very large garden spiders in webs, or huge house spiders in the bath!

Nevertheless, although I appreciate the importance of spiders, I find my actions following the direction of my heart: I rescue bees from spider webs, and so if you find such situations irresistible yourself, I hope this page has been useful.

Not all spiders catch bees in webs!

Some spider predators lurk around flower heads and pounce on the unsuspecting victim, whether is it s a bee of small fly.  One example in the Candy-striped spider.

Why have bees stopped visiting my garden?