Question:
What are the key stages of the bee life cycle?

The short answer is:
All bees, regardless of species, go through the stages of egg, larva, pupa, then adult.

Bees are not born fully grown.  They are born from an egg.

Between the time an egg is laid by a female adult bee (called a 'queen' in some species) and the emergence of the adult, bees undergo a complete metamorphosis - that is, a total transformation in appearance from egg, through to larva, then pupa, and finally adult bee.

The life cycles of bees varies according to species.  Species may be:

Regardless of species however, all bees go through 4 common stages in their development.

4 key stages in the life cycle of bees

A bee life cycle has 4 key stages, whether they be honey bees, bumble bees or solitary species. There are many variations, but the 4 key stages are:

Egg of honey bee (Apis mellifera) inside a wax cell.

An egg is laid by a queen or female in a specially prepared cell.  The structure and materials used to make the cell may differ depending on species.

For example, honey bee and bumble bee eggs cells are constructed from wax. 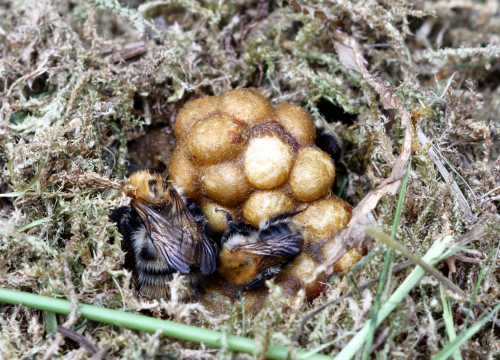 However, there is significant variation among solitary species which may select flower petals, leaves, mud, or even resin for nest cell construction. 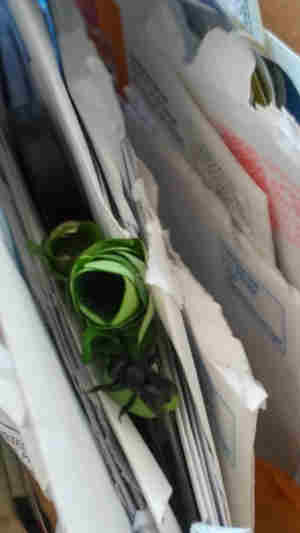 In solitary bee species, each individual egg is provided with a food supply then sealed, whereas honey bee and bumble bee larvae are fed by adults as they develop in the cell.

The egg hatches into a larva.  The larvae lack eyes and legs, and typically look like a small, curled up grubs, one in each cell.

Larva of blue orchard bee -Osmia lignaria with food provision (pollen), each inside a cell.

Bees are holometabolous, and as such, they have true grub-like larvae rather than nymphs.  The larvae look completely different from the adult which emerges later.  In contrast, nymphs resemble immature adults, but usually lack fully formed wings and sexual organs.

The larva feeds on food stores provided by the queen, egg laying female or workers, depending on species. 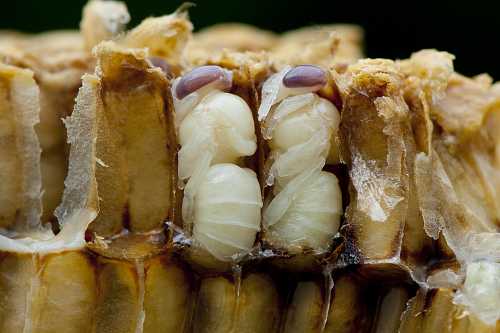 The larva is fed until it forms a prepupa. At this point, some features are clearly formed, such as eyes, legs, head, thorax, abdomen.

Some solitary bee species, spin a cocoon and may overwinter (diapause) inside it. The prepupa then becomes a pupa.

From pupa, new adults emerge.  In solitary species, usually the males emerge first, but in bumble bees and honey bees, the first to emerge are female workers followed by males (drone honey bees).

Adult females mate with males.  Females locate a suitable nest site and build cells in which to lay eggs and rear the next generation.

In honey bees the process is different, with a suitable nest site being located by worker scout bees.


There is wide variation in life spans of adult colony members and queens.  Generally, honey bee queens may live some years, where as bumble bee queens may survive for 12 months, some of this time spent over-wintering.

Some solitary species may, over-winter as adults, whilst others may over-winter as full-grown larvae, and mature into adult bees the following spring.

How long do bees live? 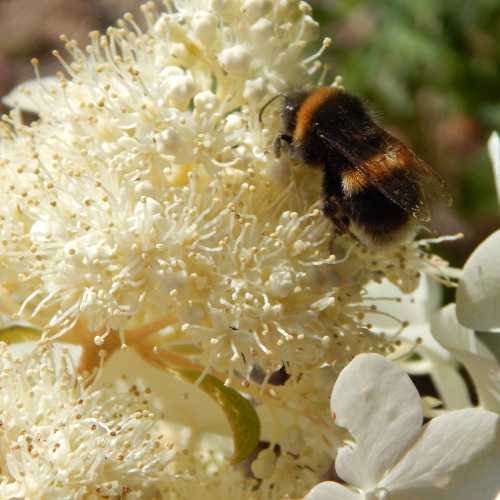 Do all bees sting?


How Many Legs Do Bees Have And
How Do Bees Use Their Legs?