One of the easiest of the plasterer bees (Colletes) to spot in the UK is Colletes hederae – the Ivy Bee.

It is the largest of the UK Colletes species, and makes a comparatively late appearance in the year to time with the flowering period of its main source of food: ivy, which provides an important source of pollen.

Hence, if you see a bee that is slightly larger than Apis mellifera (the Western honey bee) foraging on ivy, it is likely to be the ivy bee.  Because of the importance and flowering period of ivy, it’s possible to see this species from autumn to October, but even through to November.

Though males are slightly smaller than females which measure about 1cm in length, both males and females have distinctive pale orangey-coloured bands on the abdomen, and a gingery thorax.

About Colletes hederae - The Ivy Bee

Although it has a strong preference for ivy flowers, research from  20081, notes the species is in fact polyectic (i.e. it will feed on floral species from multiple familes). 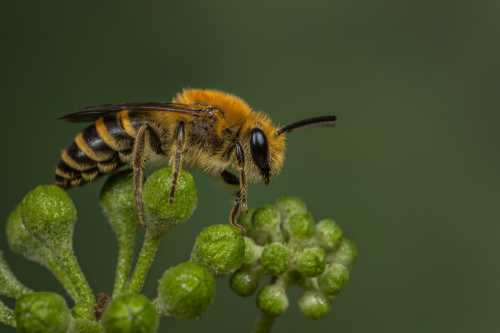 As well as foraging on ivy flowers (Hedera), Colletes hederae were observed to feed on flowers from the Cichorioideae group (chicory and dandelions), and Asteroideae (daisy family) among others.

Males emerging around August have also been seen on sea holly and heathers.

Nests are found in aggregations, with several thousand nests in any one location.  They prefer loose soil for their burrows, and may be found nesting in coastal areas, but may also nest in lawns.

If you discover these bees nesting in your lawn in large numbers, please do not worry about it.  They are not aggressive, and they will probably only be around for about 6 weeks.

Nest burrows may be reused, and the burrows may measure up to almost half a meter in depth.

If you are lucky enough to find nest burrows of the ivy bee, look out for clusters of mating bees as new females emerge from the burrows from mid-September onwards.  As females leave the nest, multiple numbers of males pounce on her at the same time as they compete to mate. 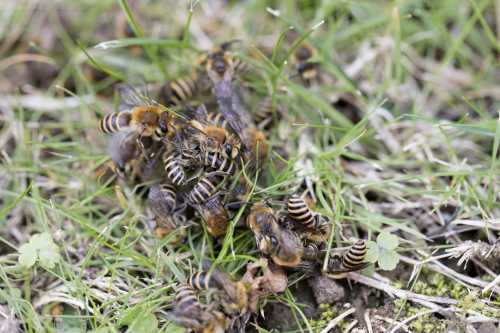 A mating cluster of Colletes hederae.

This bee is widespread in Europe, but was only discovered in the UK in 2001 in Dorset, and appears to be spreading its range.  It can be found in a variety of habitats, including coastal and urban locations, and ranges from southern England, Wales and North East England as far as County Durham. 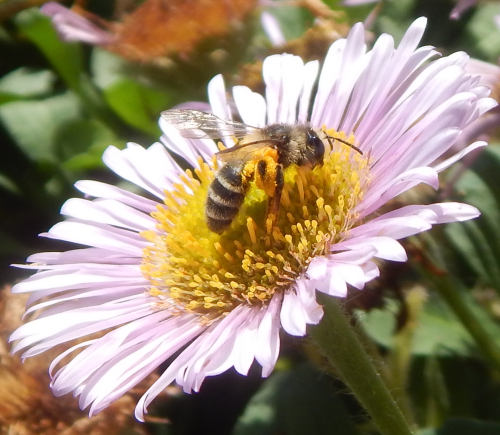