Which Lime Trees Are Toxic For Bees?

Whilst some lime trees are toxic for bees, others provide a very useful nectar source.

Reputedly some lime trees (tilia) are poisonous for some bee species and less toxic for others, or have at least a narcotic effect.  Such an effect will obvioulsy make the bees vulnerable to predators.

If you find dead bees beneath a lime tree, suffice to say, it’s likely you have a poisonous variety, or at least one which has those narcotic effects.

An exception to this could be a case I personally heard about.

Some lime trees  (also known as Linden trees) are favoured by beekeepers, and Linden honey is especially popular in Romania, for example, but Linden does not produce propolis.  Bees may also harvest the honeydew produced by aphids  on the leaves.

Which Lime Trees Are Safe For Bees?

Generally, it is thought that non-toxic limes are: 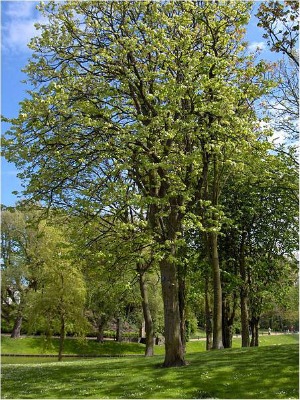 Which Lime Trees Are Toxic For Bees?

Excerpt from 'A Sting In The Tale' by Professor Dave Goulson (also author of Bumblebee Behaviour And Ecology):

"Buff-tailed and white tailed bumblebees love the flowers of lime trees, although there is something in the nectar which seems to make them dopey and even sometimes kill them".

The following lime trees are regarded as poisonous for bees (or having an unfortunate/narcotic effect, or hamper the bee in some way), and so should be kept out of the bee garden:

This is what RHS say about weeping silver lime (post the link in your browser):
http://apps.kew.org/trees/?page_id=131

“silver lime is a statuesque import from eastern Europe. Bees pollinate the flowers in summer but often die in the process as the nectar is toxic to them. ……......

They are pollinated by bees but as the nectar is toxic to them, you can sometimes find silver lime trees with piles of dozy or even dead bees beneath it. Indeed, tea made from the flowers of Tilia tomentosa can act as a sedative so the tree clearly has some strong narcotic properties”.

Lime trees are said to have a short flowering season.  My advice would be, that if you are considering buying lime trees, consider Tilia platyphyllos or tilia cordata, since it is generally considered that both of these species of lime trees are safe for foraging bees. However, space may be an issue!

If this is the case, perhaps consider different species of trees instead of lime – take a look at these trees, shrubs and hedgerows for bees.

Why Do Some Linden Trees Effect Some Bees In This Way?

This is as yet unclear.

One theory is that some bumble bees simply starve themselves to death by drinking so much lime tree nectar that they run out of energy and die before returning back to the nest.

Having read a number of research papers, this theory lacks credibility in my view.

It seems highly unlikely to me because if the bees keep feeding, surely, they are obtaining energy from the nectar they have just been feeding on, and so how can they have 'run out' of energy?  Why don't they 'run out of energy' after feeding at other highly melliferous plants, such as borage and comfrey?

It also fails to explain a number of other results I have read from research.

My own (untested) hypothesis is based on the theory of the founder of toxicology, Paracelsus, which is:

"The dose makes the poison"

"All things are poison and nothing is without poison; only the dose makes a thing not a poison."

In other words, it is healthy to drink clean water, but if you drink far too much of it in one go, even water can kill you.

Thus I wonder if the same is true for some bees and lime trees - i.e. sometimes the bumble bees enjoy the nectar so much, they consume too much of it, such that it has a narcotic or even poisonous effect.

Why this should be the case sometimes for bumble bees and not honey bees is unclear, but here are my possible explanations:

I don't know what the answer is, but since nobody has any proven, definite explanation as yet, it's interesting to guess!