Turkish Mad Honey And The Poisonous Rhododendrons
The earliest form of chemical warfare probably dates back to Turkey in 65 BC, but what is more surprising is the role of honey bees and a particular species of plant, in the production of toxic honey – also known as ‘mad honey’.

That honey could be toxic if made from certain plants, was recognised in ancient times.  Pliny the  Elder (AD 23–79) was a Roman author, a naturalist and natural philosopher.

“The Roman naturalist Pliny extolled the qualities of excellent honeys from around the Mediterranean, but warned against meli maenomenon ("mad" or " raving" honey) from the Black Sea coast.  He was the first to attribute toxicity to rhododendron, azalea, and oleander, plants known locally as "goat-bane," "lamb-kill," "cattle-destroyer," and "horse-killer”.

Some honey was so pernicious that Pliny advised immediate antidotes: fine old mead, honey in which bees had died, or rue and salt fish as an emetic. He also noted that sometimes only part of a honeycomb was bad, and that honey was hazardous only after wet springs.

Musing on the paradox that the "sweetest, finest, most health-promoting food" could be so randomly lethal-and pointing out that nature had already armed bees with venom - Pliny concluded that such honey must be intended as a natural curb on human greed.” 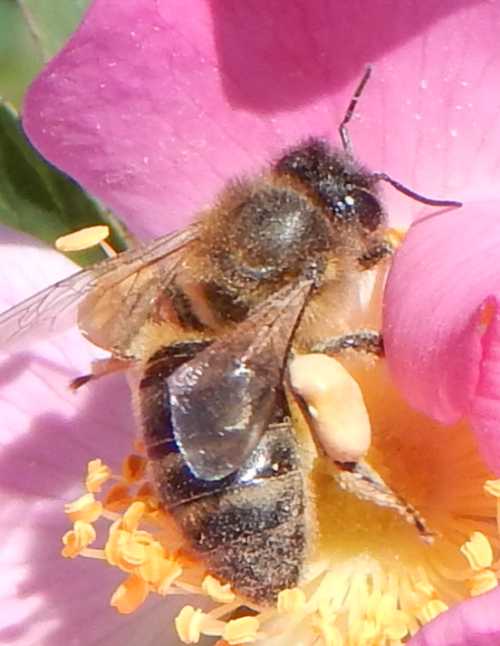 The beautiful Apis mellifera - honey bee, may produce toxic honey if it forages on plants that produce nectar containing grayanotoxins. Here, a honey bee worker is foraging on a wild rose (not toxic).

Thanks to the unusual density of this copiously-blossomed rhododendron shrub: Rhododendron ponticum in the region of Turkey fringing the Black Sea, honey bees in the area may forage exclusively on its nectar.

The nectar, however, contains  toxins called grayanotoxins.  When consumed to excess, grayanotoxins can be fatal, but at the very least causes blurred vision, dizziness, hallucinations, nausea, numbness, fainting and seizures.  In Turkey, the honey has a special name: deli bal ("crazy honey").

Thus when bees foraging on the dense region of toxic rhododendrons by the Black Sea, collected the nectar and concentrated it into honey, the result was a honey so potent that King Mithridates VI of Pontus successfully used it to prevent the advance of the invading Roman army of Pompey the Great.

The King had heard of the effects of the local honey in Asia Minor on the Greek army.

"After accomplishing the ascent the Greeks took up quarters in numerous villages, which contained provisions in abundance.

Now for the most part there was nothing here which they really found strange; but the swarms of bees in the neighbourhood were numerous, and the soldiers who ate of the honey all went off their heads, and suffered from vomiting and diarrhoea, and not one of them could stand up, but those who had eaten a little were like people exceedingly drunk, while those who had eaten a great deal seemed like crazy, or even, in some cases, dying men.

So they lay there in great numbers as though the army had suffered a defeat, and great despondency prevailed. On the next day, however, no one had died, and at approximately the same hour as they had eaten the honey they began to come to their senses; and on the third or fourth day they got up, as if from a drugging."

Realising that the local honey could be used to thwart an attacking army, King Mithridates arranged for toxic honeycombs to be placed strategically along the roadside.

Honey has long been a prized sweetener and food source, so it’s no surprise that the unsuspecting Roman army believed the prized honeycomb to be a gift from the gods, and consumed it.

Now hampered by the effects of the toxic honey, many of the Roman soldiers were slain.  Thus, the honey had purposely been used as a toxic weapon against an enemy.

Why was the nectar toxic for humans but not the honey bees?

This is an interesting question, especially because Rhododendron ponticum is an introduced invasive plant species in many regions, such as the British Isles (not to be confused with some of the non-invasive cultivated forms available).

It seems the local subspecies of honey bee in Turkey is able to tolerate the toxins in the nectar.

However, it is not the case that all honey bees can tolerate the nectar.  In the British Isles, where efforts are being made to remove the shrub, Rhododendron ponticum is primarily pollinated by bumble bees rather than honey bees, and research suggests that the local honey bees and species of wild solitary bee displayed toxic effects upon ingesting the nectar3 and honey bees certainly avoid the plant4.

Generally, it is common that foods which are toxic for some species (including humans) may be perfectly edible for others.  For example, many birds can eat holly and ivy berries, but both are toxic for humans.  Similarly, mistletoe berries can cause illness in humans, but again, are enjoyed by various bird species.

Toxic honey is most commonly made from the nectar of Rhododendron luteum and Rhododendron ponticum. Other plants also produce toxic honey, with a range of effects and degree of toxicity.

Honey produced from the nectar of Andromeda polifolia (bog rosemary) can cause full body paralysis and potentially fatal breathing difficulties due to diaphragm paralysis.

See a summary of a research paper with a list of plants which produce toxic nectar.

**Xenophon's Anabasis - The most famous book of the Ancient Greek professional soldier and writer Xenophon. The seven-tome book of the Anabasis was composed around the year 370 BC.

Articles about bees and foraging