What are Stingless Bees?

Stingless bees belong to the tribe Meliponini and are mainly found in tropical countries.  Some of them have interesting and unusual behaviours, such as eating dead meat!  They are part of the Apidae family, along with honey bees, bumble bees, and carpenter bees. 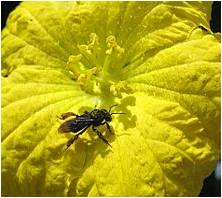 Stingless bees are excellent pollinators of crops and flowers.  They are known to visit the flowers of 90 crop species, and to be effective pollinators of 6 species (1), including mangos, macadamia nuts and watermelons, eggplants (aubergine), whilst contributing to the pollination of 60 other species, such as strawberries.

It has also been found that like bumble bees, stingless bees are able to buzz pollinate, and thus have been proven to represent a possible alternative to bumble bees for commercial pollination of tomatoes in Brazil, where there are only 7 native species of bumble bee (2).

There are a variety of different nest constructions, but they may be made from wax and resin, and mud may also be added by worker bees.   Stingless bee nests are usually found in tree or wall cavities.

This is, in my view, one of the most interesting tribes of bees, due to some unusual habits and behaviours. 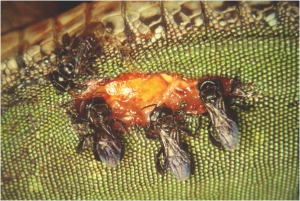 In some countries, certain species of stingless bees are kept in place of honey bees, and produce a small amount of honey.  They may also be ‘kept’ not for the sake of honey production, but for general interest and to benefit from the pollination service they provide in gardens.