Worldwide, Melittidae are a relatively small family of bees, with around 200 genera.

A brief introduction to Melittid bees

Members of this bee family are short-tongued.

They are known to have narrow or oligolectic foraging preferences that deviate from the gathering of nectar and pollen to feed their young.

For example, the genus Macropis – oil-collecting bees, are not surprisingly known for their oil collecting habits.

These bee species have a particular relationship with Loosestrife (Lysimachia) flowers, from which females of this genera gather pollen and floral oils on their sturdy rear legs.  They have specially adapted, feathery hairs on the back legs, and hairs on the front legs for mopping up and gathering oils.  The oil is mixed with pollen for feeding the young.

In fact, they are one of a handful of species that feed their young pollen and floral oils, instead of pollen and nectar, although adults will feed on other plants for nectar.

The oils are not only food for offspring.  The oils are used to line nest cells, thus making them waterproof and protecting the larvae.  In this way, Macropis are able to create ground nests even in damp conditions where some of their favourite Loosestrife plants thrive and spread.

Fewer than 20 species of Macropis have been identified globally.  The US and Canada has four species.  Only one species occurs in Britain: Macropis europaea – the Yellow Loosestrife bee.

One of my favourites from the Melittidae family is the beautiful Dasypoda hirtipes – Pantaloon bee, so called because of the long hairs on the rear legs giving the appearance of ‘pantaloons’. 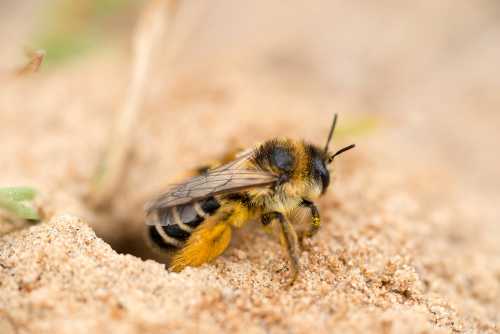 The oldest or one of the oldest fossilized bees?

The Melittidae also includes the oldest bee fossilized bee, or possibly one of the oldest – it’s now debated following further study.  Why?

It was initially proposed that a species discovered in the Florissant shales of Colorado, USA was identified as Melitta willardi, and that this was the oldest known fossilized bee ever found.  It was dated to around 100 million years old.

However, a 2014 study1 then suggested that, based on the formation of the wings, the bee did not belong to the genus Melitta after all, but was closer to Andreninae (mining bees), and the authors of the study therefore describe a new genus, Andreopteryx, thus renaming the bee Andreopteryx willardi.

Nevertheless, a further 2007 study from France2 had already described Palaeomacropis eocenicus gen. nov. sp. nov, as an early fossilized bee of the Melittidae family, which they state has similar characteristics to one of the contemporary Macropis bees (oil collectors) within the Melittidae family.


Book Review:
The Bees In Your Backyard