Is Acanthus Good For Bees?

Acanthus plants, also known as 'bear's breeches', are sometimes grown for a combination of their interesting, waxy, spikey leaves, their striking flowers (the purple bracts rather than petals), and their height.  Acanthus have tall, sturdy flower stalks with many individual flowers adorning each stem.  It's certainly a handsome plant, but do bees like Acanthus?

I would not recommend this plant, for the simple reason that bees may get trapped inside the flower heads and die inside because they cannot get out.

Acanthus (Bear's Breeches) - Okay For Some Bees, But Not for Others?

Years ago, I wrote about rescuing a trapped bee from the inside of an Acanthus flower.  It was clear to me from the loud and distinctively furious buzzing that the bumble bee (a new queen or certainly a large worker) had ventured into the flower, only to find that it could not get out.  I leaned over, gently pulled down the lower 'lip', and the bumble bee escaped.

However, bees are not always so lucky. 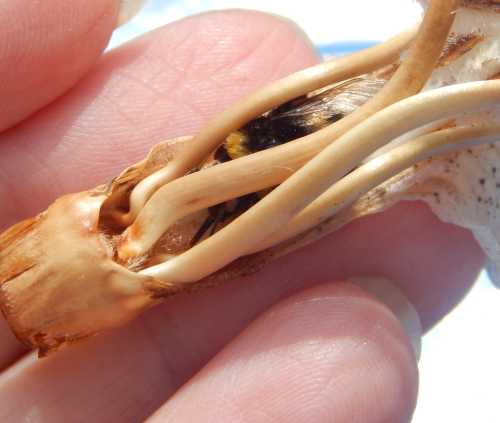 A dead bumble bee, caged inside the stamens of Acanthus flower

On a number of occasions, I have also found dead bumble bees inside Acanthus flower heads.  On a visit to a local public garden, I picked up several old flower heads that had dropped onto the floor.

Some of them had dead bumble bees inside. 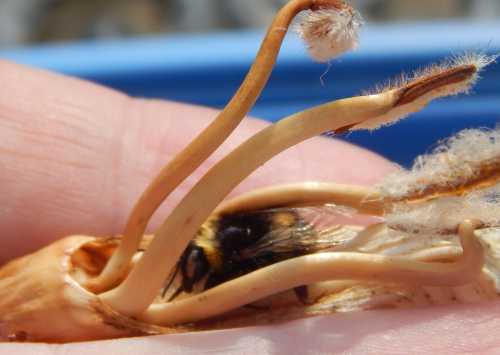 A dead bumble bee - I myself lifted the stamens for a clearer view of the bee inside.

I am aware, that bees may sometimes be seen visiting the flowers without getting trapped - including some bumble bee species, but a mistake only needs to happen once.

I understand that in its native country, the Acanthus attracts its perfect pollinator, allegedly/notably Xylocopa species (large carpenter bees).  However, I would be interested to know whether any of these bees are ever found to be trapped inside the plant.

Regardless, I am not the only one to have noted that Acanthus can trap bees inside the flowers, and a while ago, I came across a video filming such an event in which it was very obvious the bee had ventured inside to get at the nectar, and was having difficulty escaping. Even if it had got out without assistance, no doubt the bee would have needed to use vital energy, not to mention wasting foraging time.

Unfortunately for copyright reason, I am unable to include the video here, but I do have a number of my own videos, and will add more as the opportunity presents itself.

I don't grow this plant in my bee garden, so my chances of filming are restricted to times and locations when I not only come across the plant, but have a suitable means to record any 'bee trapping' events.  Even then, ultimately I would have to take action and rescue the bee, thereby destroying concrete proof.

How Do Bees Get Trapped Inside Acanthus Flowers? 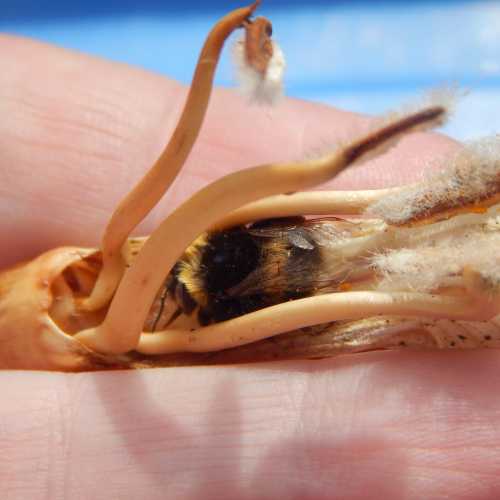 It appears there may be three main reasons that bees could have difficulty getting out of an Acanthus flower.

1. The structure of an Acanthus flower

So what happens?  A bee enters the flower to forage, and the deep gullet requires the bee to journey right inside to get to the nectar reward, unless they can find an alternative way to access the nectar.

To get out again, the bee has to 'reverse' out of the flower.  From my observations, this is when bees can get trapped.  If they are unsuccessful in negotiating this reverse movement,  legs may accidentally get stuck 'over' the stamens.   It's a bit like the effect of putting your hand into a jar, and trying to remove it again whilst your fingers are splayed out.

This means the bumble bee can move forward further into the flower again, but cannot get out.  I suspect the dead bees inside the flowers I collected, had tried to keep themselves alive on the available nectar, but sooner or later the flower will cease to produce it.  It can be seen in the image below that the dead bumble bee has its tongue outstretched, trying to get at nectar. 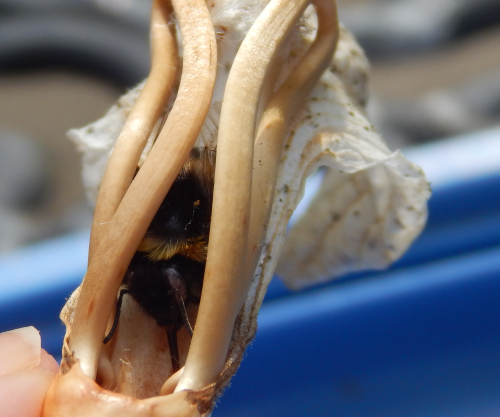 A dead bumble bee. It had apparently been trying to keep itself alive by feeding on nectar, but eventually the plant will stop producing it.

Below is a video of a large bumble bee - a forest cuckoo Bombus sylvestris, getting out of an Acanthus flower.

This bee does at least manage the task, with some effort:

Bees may have to learn to negotiate different flower shapes - at least sometimes!

If the idea that some bees may get it slightly wrong (or even badly wrong), seems crazy to you, well in fact, this concept is actually not new - it's just that the consequences may not usually be fatal as the bee learns the ropes.

Here is a quote from Professor Goulson in Bumblebee Behaviour And Ecology, citing a number of papers going back some years:

The problem is that with Acanthus flowers, as previously stated, a bee only has to get it wrong once.

I found it interesting to observe bumble bees and honey bees exploring the flowers.  Were they trying to work out how to get to the nectar reward? 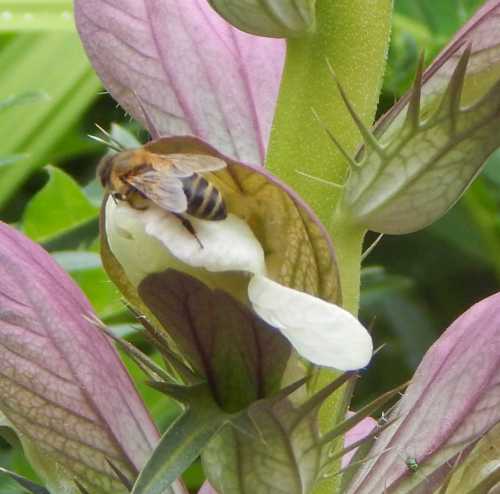 When the honey bee did appear to enter the flower, I was not clear about whether it reached the nectar. The bee entered via the side, and did not venture down the gullet, between the deadly stamens.  I took photos of the bee inside the flower, showing its position.

Below you can see the honey bee is to the side of the flower, but its tongue is visible - this could be in anticipation of feeding, but it may mean the bee was able to reach the nectar. 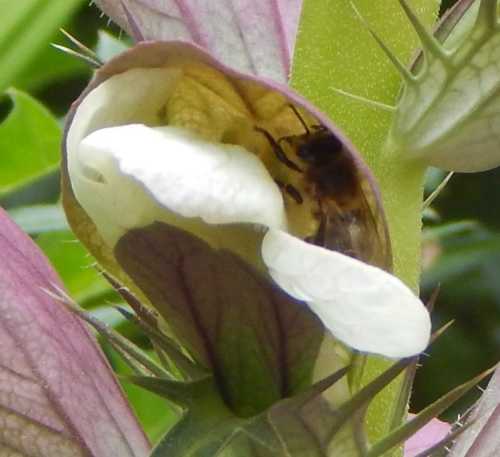 When comparing the behaviour of the larger bumble bee in the video to that of the honey bee,  I actually have a feeling the former is correct, and that taking nectar would have required deeper foraging, but I can't be sure.

It's an interesting fact that plants appear to have evolved means to attract their perfect pollinators, and that not all bees suit each flower.  Some flowers even produce toxic nectar, or nectar that is harmful. Why this is the case is unclear.
Other plants deter bees.

In the case of Acanthus, it's possible the honey bee would have been slim enough to reverse out easily, yet perhaps it lacked the strength of the bumble bee to force its way to the nectary in the first place.

Clearly, some bees appear to have difficulty with the plant.

What was interesting to see was how few bees there were overall around this patch of flowers, although there was a lot of competition close by.

Given this point, it is intriguing that any bees bothered with the Acanthus at all, although it's possible other bees had tried, learned, and abandoned the flowers.  Other bees may not escape, however.

Do Acanthus only trap smaller bees?

In my experience, no, it's not necessarily the case.

The bumble bee I mentioned at the very beginning of my article was a queen or at least a very large worker.  I doubt it would have got out had I not been around to perform the rescue.

I will return to the site of the Acanthus flowers again, and pick up any flower heads with dead bee inside, and note the size and species.  If you have also collected such images and would like to share them on my site, please contact me.

It appeared to me that a spot of nectar robbing might provide a solution, especially for bumble bees wishing to access the nectar, perhaps with a little secondary robbing for other species.  However, I have not observed this happening, and I do not know why, but I will keep a look out for evidence.  If you have it, please get in touch.

I have Acanthus in my garden, what should I do? 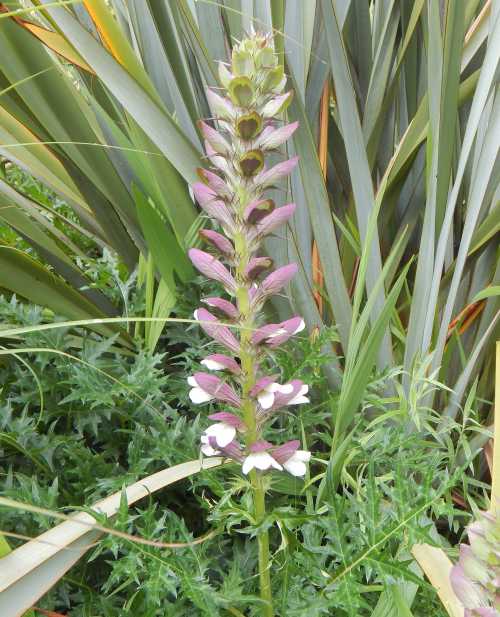 This has to be your decision, and I can only state what I would do.

It can take some time and a few repeat digs to remove it.  It's rather thuggish, and spreads easily.

I'm aware some people love it for the foliage, and admittedly, it's a handsome plant, but in my view there are plenty of plants for bees that can more than match the foliage and height offered by Acanthus, whilst being of benefit to bees and pollinators also.

In conclusion, Acanthus is not a plant I would recommend in bee gardens - or indeed, any gardens, for the simple reason that bees have to learn to forage successfully on complex floral structures, and in the case of Acanthus, failure to negotiate exit successfully could be fatal for a bee - possibly even a newly emerged queen, upon which future generations of bees depend.

Acanthus may be one of those plant species that would be better to constrain within its original native geographical range and where the local pollinator population has long adapted the skills to forage successfully on this plant.