How Big Is The Brain Of A Bee?

Bees may be small, but they are known for being smart.  Bees have been trained to navigate mazes, sniff out bombs and more.

This may lead use to ask, how big is a bee's brain?

We measure tiny bee brains by weight, and the answer is, not surprisingly, it depends on the size and species of bee.

However, from research, we know that:

At the other end of the scale are some of the base-banded furrow bees (Lassioglossum) and the yellow-face bees (Hylaeus), which have brains that weigh less than half a milligram.

Below, this topic is explored in greater detail, looking at the recorded brain sizes of 93 species of bee.

How Big Is A Bee Brain?
Which Bee Has The Largest / Smallest Brain?

Unless we measure the brain of every single bee in the world, we cannot be sure which bee has the largest brain, although we could hazard a reasonable guess that the biggest bee brain probably belongs to the world's largest known bee species, Megachile pluto, Wallace's giant bee.

However, I'm not aware of any research data providing the weight of its brain, and I wouldn't want to hear of any new research in which this species was dissected just to find out - they are rare!

Likewise, the bees with the tiniest brains are quite likely to be the world's smallest bees, currently believed to be Perdita minima and Quasihesma clypearis.

Are bees with larger brains more clever than bees with smaller brains?

This may or may not be true.  For example one study showed that large bumble bee workers are more efficient foragers and are better learners than their smaller sisters.

However, we cannot know for sure whether a bumble bee species with a larger brain than a honey bee, is therefore always smarter (according to the limits of any experiment humans could devise to answer the question).  In fact, there is  plenty of research assessing the ability of honey bees in particular to learn concepts, recognize, remember, among other skills - see Are Bees Smart?

In comparison, there is little research testing the intelligence of other bees.

In any event, with so many species in the world, we cannot possibly make generalizations and comparisons for all bees, based only on what we know about one species.

What we do know about the size of bee brains...

However, we know the sizes of brains of 93 different bee species, thanks to a piece of research in which this data was collected.

The full tables of data for the 93 bees are provided further down this page, however, it's probably worth summarizing some of the information into key points. 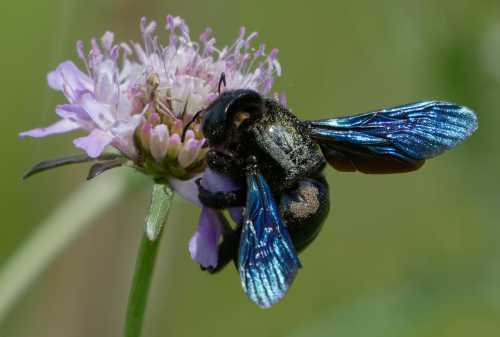 Violet carpenter bee Xylocopa violacea - a species with one of the largest brains in the study.

Of the 93 species studied, the top 5 bees with the largest brains were mostly the large carpenter bees, Xylocopa, along with one other species, the Florentine wool carder:

However, when we consider the size of the brain in proportion to the body, the White-banded digger bee enters the top 5.

I grouped some (but not all) of the species by commonly-known type (genus).

For example, I grouped all of the bumble bees in the study together, and separately, the leafcutters etc, and looked at the range in sizes, just for comparison. (There is some slight rounding of numbers in the table).

Remember the study provided data for 93 species, and whilst this is a lot of bees, there are about 25,000 known species in the world.  Any study can only reasonably provide us with a small snapshot.

The ranked brain size of 93 species of bee

Below are the sizes of brains of all 93 bee species included in the study.

The ranked brains size of 93 species of bee, in proportion to body size by ITS

The rankings of bee brains change a little, when we consider the size of the brain in proportion to the body.

Note:  ITS = Intertegular span.  The distance between where the wings attach on the body. This measurement has been used as an estimate of bee body size and expected flight abilities (Cane 1987).