Beekeepers may select bees to suit their particular location or environment, such as greater tolerance to harsher weather conditions.  Some beekeepers choose their bees based on temperament or honey production.

Increasingly, it is recognised that it is important to select bees that will be suited to the geographical location in which they are kept .  Scientists make the point that genetic adaptations can be regional, therefore it does not make sense to attempt to keep bees in an environment to which they are ill-adapted (more about this below).

However, here are 5 types of honey bee most commonly considered by beekeepers (this may depend on location): 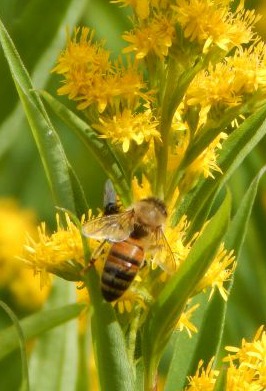 In no particular order:

Probably the world's most widely distributed honey bee.  However, may need higher levels of maintenance and feeding support in order to survive in cooler climates.

Favoured by some beekeepers, but it is worth bearing in mind that these bees evolved in a geographic region where summers are warm, but short, whilst winters are cold and long.  If you are beekeeping in conditions similar to this, Apis mellifera carnica may be the right choice for you.  You will need to ensure there is ample supply of suitable nectar and pollen available from as early as possible in spring.

This honey bee has the longest tongue of Western honey bee sub-species.  Reputed to be gentle.

Very much favoured by some, especially in northern Europe where it is well adapted to the cooler climate.

This hybrid, the Buckfast Bee evolved from the efforts of brother Adam (1898 - 1996) at Buckfast Abbey in Devon, England.  His intention was to produce a disease-resistant, productive and good-tempered bee.  It is important to find a reliable breeder.

Scientist, beekeeper and author, and world authority on honey bees, Professor Thomas D. Seeley, makes some very important observations with regard to the genetic adaptations of honey bee subspecies to a geographical location.  For anyone with an interest in beekeeping, his book The Lives Of Bees is not to be missed!  Quoted from chapter 11:

"The process of adaptation by natural selection produced the differences in worker-bee color, morphology, and behavior that distinguish the 30 subspecies of Apis mellifera that live within the species' original range of Europe, western Asia, and Africa.  The colonies in each subspecies are well adapted to the climate, seasons, flora, predators, and diseases in their native region of the world.

Moreover, within the geographic range of each subspecies, natural selection has produced ecotypes - populations that are fine-tuned to their local conditions.  Perhaps the best-documented example of this geographical adaptation is the ecotype A. m. mellifera (the dark European honey bee) that is adapted for living in the Landes region of southwestern France.  The rhythm of its annual cycle of colony growth is attuned to massive bloom of ling heather (Calluna vulgaris) in August and September.  Colonies of honey bees that are native to this region have an unusual, second strong peak of brood rearing in August.  This gives them a second burst of colony population growth that helps them exploit this late summer heather bloom.  Colony transplant experiments have been performed in which colonies from the region around Paris (which lacks a heather bloom) and from the Landes region were moved to each other's location and then their brood-rearing patterns were recorded.

These experiments show that the difference in annual brood cycle between these two ecotypes has a genetic basis.  This example shows us that shipping mated queens, and trucking whole colonies, to places hundreds or thousands of miles away - for instance, from Hawaii to Maine or Italy to Sweden - is likely to force colonies to live in environments to which they are ill-suited."