Bees love lavender.  This fragrant herb provides nectar for foraging bees from spring and through summer.  From personal observation, they seem to like both English lavender and French lavender and hybrids.

However, although it appears honey bees like lavender (and will certainly visit it), research suggests it is more popular with bumble bees than honey bees.

Why is lavender more popular with bumble bees than honey bees?

Research from the University of Sussex found that bumble bees, with their longer tongues, are better adapted than honey bees to extract the nectar from the tubular shaped flowers.

What does this mean in practice?

It basically means that it takes less effort for a bumble bee to feed on lavender, than it takes for a honey bee.  As a result of having longer tongues, researchers observed that a bumble bee needs only 1.1 - 1.4 seconds to extract nectar from a lavender flower.  In contrast, the shorter-tongued honey bee needs to push its head further into the flower in order to reach the nectar, resulting in the bee having to spend about 3.5 seconds on a flower. 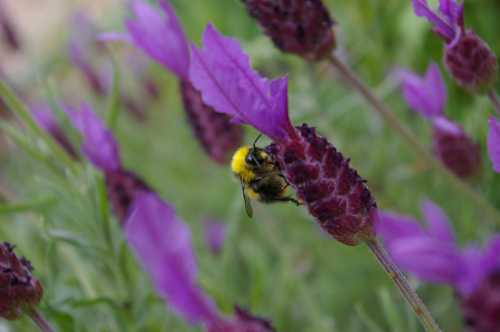 A couple of seconds difference may not seem like much, but multiplied over several thousands of flower visits, the difference becomes very significant. 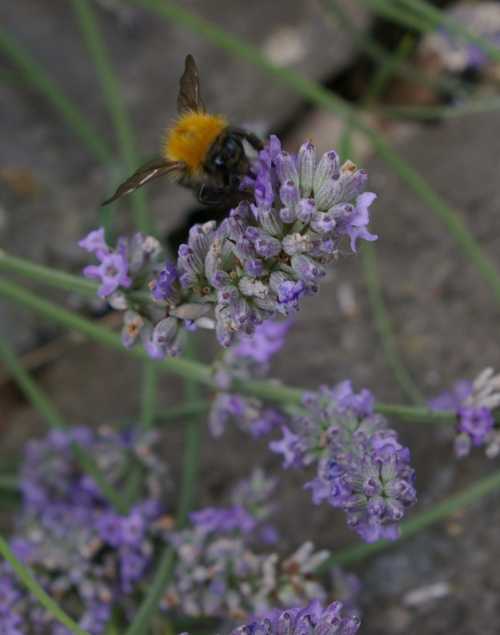 Bumble bees can quickly extract the nectar from lavender flowers because of their long tongues.

The researchers found that on average, a lavender flower contained only 0.02 microlitres of nectar.  Given that a honey bee can hold 50 microlitres in its honey stomach, a bee would need to visit many flowers - about 2,500 in order to fill its honey stomach before returning to the colony.

While bumble bees make a beeline for lavender, honey bees prefer to forage on borage

At a rate o 3.5 seconds per flower, I calculate that it would take a honey bee 8,750 seconds to fill up its honey stomach if it foraged only from lavender flowers.  In other words, that's 145.8 minutes, or 2.43 hours.

In a garden full of flowers, different bee species will always choose to forage from those offering the most reward for them, but this depends on the species of bee and on the flowers available.  It's clear that some flowers are more attractive for particular bee species than other flowers.  For example it's well known that borage is another favourite herb for bees.

However, in research, again from Sussex University, when both borage and lavender were available to bees, the bumble bees favoured lavender, whereas the honey bees mostly visited the borage.  In fact, they counted 10 times as many bumble bees as honey bees on the lavender, where as the opposite was the case for borage. 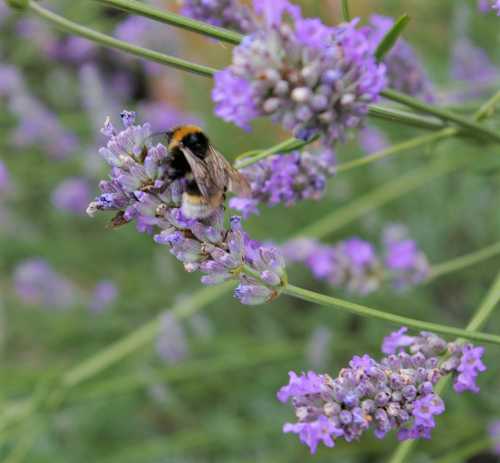 Bumble bee love the lavender in my garden.

Certainly in my garden, I mostly see  bumble bees on my lavender and the occasional blue mason bee, particularly in spring.

Lavender needs a sunny spot in well-drained soil, and will thrive quite well in drought conditions.

Lavender also looks great in pots on the patio, but despite being fairly drought tolerant, they could dry out in containers and so will need to be watered in hot, dry spells.  However, one advantage of growing in pots is that if you have a greenhouse, you can pop the plants inside to shelter in winter if necessary.  We lost a large lavender shrub one winter thanks to particularly heavy snowfall.  It was outdoors in a fairly exposed position in the garden.

It's best to take multiple cuttings since they may not all take.

If you would like to keep the plant compact, it's best to prune after flowering.  I have tended to leave the flowers in place until the following year, so that the birds can feed from the seeds, although the plant can become a bit untidy in appearance. 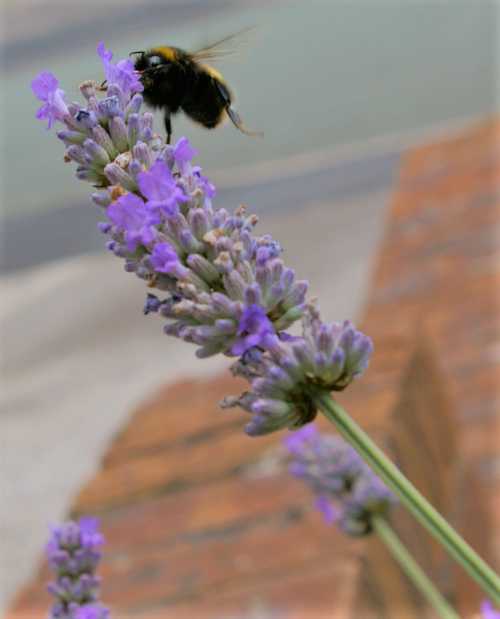 Want to grow lavender for bees? Lavender varieties to try...

Bees like lavender of many varieties including hybrids.  Here are a few you could try:

More articles about bees and plants