A yellow jacket sting or wasp sting can be a painful experience, although usually, it is no more that a minor incident and rarely causes a serious, lasting problem.

The exception to this is when a severe allergic wasp sting reaction - or even anaphylactic shock is caused (which is generally rare – anyone aware that they have an allergy to stings should carry an Epipen at all times). 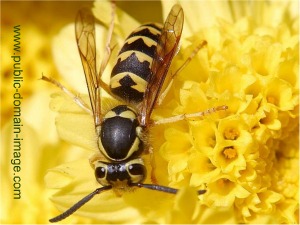 Yellow jacket stings are also chemically slightly different to those of hornets and bees – that is, they are chemically different for each insect, although venoms for hornet, bee and wasp stings may contain similar protein and enzyme constituents.

A yellow jacket sting is more likely to occur during the late summer or early autumn, when the nest is getting crowded, and they are eager to feed.

Thus, when all the larvae have developed into adults, the workers must find an alternative source of food.  This is when they become more interested in fruit, drinks, refuse bins and so on.  They are very keen to feed, but in actual fact, the colony is now in demise.

They may sting when they perceive a threat, so it is important to try not to panic around wasps, and avoid waving arms around, since this action can encourage or annoy the wasps.

During the early phase of the colony development, it is believed that stings are less likely to occur - the colony is still growing, there are fewer wasps, and the wasps themselves are focused on establishing the colony.  See wasp life cycle.

To prevent stings, consider using a deet free repellent, such as one containing Picaridin.

For this you could try using a Waspinator.  I tend to recommend them because they are very easy to use, and act as an actual deterrent (rather than having to deal with the problem once a nest is already in place).  You may be able to make one, but on the other hand, they are not very expensive, and should last a while.

Read more about how to natural bee and wasp deterrents.

As with bees, male yellow jackets cannot sting – only females are able to. As well as being used as a weapon against any perceived threat, female wasps use the sting to paralyze prey (aphids, insect larvae), which they will then feed to their own off spring. The sting also doubles up as an ovipositor (egg laying organ).

What Should You Do If You Are Stung By A Wasp (Or A Bee)?

In the event of a yellow jacket sting, read my page about wasp sting treatments, first aid and prevention. This page gives advice for treating yellow jacket stings, with a number of useful tips for preventing them – especially useful if you have young children. However, if you have been stung in a sensitive area such as near to the eye, nostril, in the ear, or in the mouth, go to the hospital immediately.

Remove wasps without killing them