Why Do Beekeepers Smoke Bees?

The practice of smoking honey bees is not a new concept.

In fact, a mural in a temple from the time of the Egyptian Pharoah Nyuserre (about 4,500 years ago) shows a man kneeling in front of a bee hive blowing smoke towards the hive prior to extracting honey.

But why do beekeepers smoke bees, and why do honey bees dislike smoke?

In a sense the answer to the question is simple – they do it to protect themselves from being stung on mass by the bees.  But that simple answer hides a little more complexity!

Why should it work?
Way back in history, it was observed that when a hive detects smoke, the bees become far likely to sting.

Bees will ordinarily sting any creature they consider to be trespassing on their hive, both in self-defence, and in defence of the entire hive (or nest).

Additionally, individual bees will also release an alarm pheromone to alert other members of the hive that the hive is ‘under attack’ – thus mobilising many other bees from the hive to join the defensive attack on ‘the invader’.

So, beekeepers use smoke to subdue the bees, because not doing so could result in the beekeeper being attacked by thousands of bees. 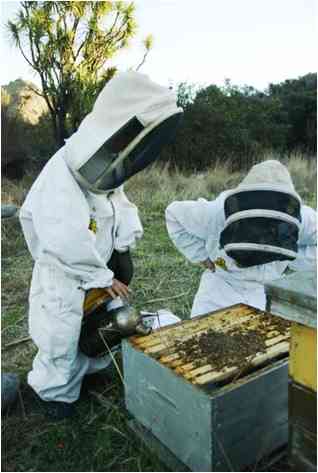 Beekeepers with an open hive - the beekeeper on the left is holding a smoker.

Why do bees hate smoke?

How does smoking bees enable beekeepers to work on the hive?

The answer is, that sensing smoke, the hive will go into ‘survival mode’, believing that there is fire and that the hive is in danger from fire.

It has been observed that when bees sense smoke they start to gorge on honey – filling up with as much honey as possible.

This is one of the occasions when bees become rather averse to stinging – it is thought it is difficult to sting with a stomach full of honey.

For some time, it was believed that the entire hive of bees filling up with honey is done in preparation for abandoning the threatened hive.

However, a field study by Tribe and his colleagues published in 2017, showed that bees gorge on honey in order to survive the period between the fire and the return of the availability of nectar.

They examined 17 wild honey bee nests in rock cavities in South Africa – all of which had survived a bush fire.  They discovered that the colonies had survived even where the nest had been partially destroyed.

It was noted that about a week or so after the fire, some plants (known as fire-ephemerals) started to sprout and bloom, thus providing nectar and pollen for the bees who had survived the interim period on the honey they had consumed at the outbreak of the fire.

So in summary, when honey bees in a hive sense smoke, the bees become more focused on gorging on honey than on the intruder beekeeper, which makes them apparently more ‘docile’, and it is therefore easier for the beekeeper to work with the hive.

It was long thought that smoke serves to calm the honey bees in the face of perceived threat, but that theory was also debunked in the study by Tribe et al.

Jurgen Tautz, a research colleague in the Tribe study, and author of The Buzz about Bees: Biology of a Superorganism, notes there are many reasons to consider this theory with scepticism.

The preoccupation with eating honey is instead a response to the threat of fire.  All colonies need a queen, but queens only leave the safety of the nest or hive to fly out and mate.

The (pregnant) queen honey bee, whose main job is laying eggs, will be unable to fly, but the colony cannot survive without her.

Instead the colony eats the honey stores and attempts to retreat into the furthest recesses of the nest cavity, along with the queen honey bee, where they build a firewall of propolis  keep out of harm's way.

Tribe, Tautz and the team noted that the bees built protective walls of propolis.  These walls of propolis have a thickness of up to several centimetres.  Nest openings are enclosed, and  entrances to comb restricted to small openings within the propolis wall.

Behind these walls, most colonies of this remarkable superorganism are able to survive!

What do beekeepers burn in a smoker?

The aim of the smoker is to create enough smoke to be effective without the materials burning so quickly that it produces flames rather than smoke.

Therefore, beekeepers use things like old pine cones; dried rotted wood; or even grass clippings.  The material is lit until it is creating smoke without flame.

A bellows on one side of the smoker enables the beekeeper to blow sufficient smoke around the entrance to the hive to make the honey bees less aggressive.

Do all beekeepers use smokers?

The simple answer is – no.

Some beekeepers think that filling the hive with smoke is not a good idea.

Although it is known to be a successful method of calming the bees in a hive, they think it is not good to subject the hive to the stress of believing the honey bee colony is in imminent danger of destruction, nor that it is a good idea to use smoke because the smell tends to linger in the hive.

For example, author and beekeeper, Phil chandler, has successfully experimented with blowing icing sugar / powdered sugar) powder instead of smoke – apparently causing the bees to start grooming each other rather than attack the beekeeper.

You can watch Phil with his sugar powder-puffer (and other tools) below.

Why do beekeepers feed sugar to bees?