The Nomada are among the most commonly occurring parasitic bee.  The species known as the Lathbury's nomad bee, Nomada lathburiana occurs in North Africa, Asia, and throughout Europe, including Britain.

Females of this species have a reddish pile of hair on the thorax, especially visible at the sides, and a distinct reddish band on the abdomen close to the thorax (by the "waist"). 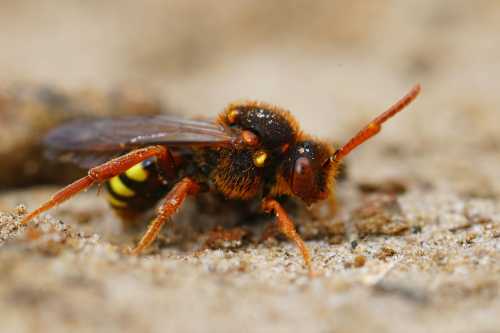 This species frequents the habitats of its hosts, which could include open woodland, coastal grasslands, flower-rich brownfield sites, and sunny south-facing slopes with an appropriate offering of flora.

Bees detect potential mates via both auditory and chemical signals1.  Mating may occur on flowers or on the ground.

A German study found that males of the Lathbury's nomad bee pounce on females, and grab them by fixing their forelegs on the side of the females’ thorax.

At the same time, males were observed to repeatedly wrap their antennae around those of the female, and then stroke the female’s antennae. At this point, a pheromone (chemical signal) is transferred from a gland in the male antennae to that of the female.

The authors of the study suggest two possible functions for the transfer of the pheromone.

The first could be to make the female unattractive to other males.  This would ensure the male guarantees the offspring carry his own genes.  However, this theory is based on studies on Centris adani (digger) bees.

Alternatively, the authors note other work by Tengö and Bergström2 in which it is suggested that the chemical excreted via the antennae on the males of Nomada species serves to perfume females with a chemical odor which is identical to that of the host species.  This would presumably make it easier for the female Nomada lathburiana to enter the nest of the host species without being attacked.  However, this theory is by no means certain.  For example, during analysis, Tengö and Bergström also found that the species Nomada flavoguttata, did not produce identical compounds as its host.

A variety of flowers are visited, including: