Do All Bees Sting?

Some people are afraid of bees generally, as they fear being stung.

A common question is:
Do all bees sting?

The short answer is:
No, not all bees sting, and of those which do, in general they are not out to sting people - they do so only if threatened or aggravated in some way, either intentionally or accidentally.

Bees that do not sting

I have actually covered all of this information before, when I created my section about ‘Bee Stings’ several years ago, however, I thought it was worth bringing some of the information into one place for ease of reference by my visitors.

Stingless bees
There are species of bees actually commonly called ‘Stingless Bees’.  Like honey bees and bumble bees, they belong to the Apidae bee family, but unlike honey bees and bumble bees, they have a very small stinger (actually a modified ovipositor) which is ineffective for defense (i.e. they can’t use it to sting).  Stingless bees belong to the tribe ‘Meliponini’, most of which are found in tropical countries.

Male bees cannot sting
Even among bee species that can sting, such as bumble bees and honey bees, males are unable to do so, although they may engage in defensive behaviours to protect the nest or hive.

Indeed some rather harmless bees can cause people to feel a little alarmed.  For example, species of Xylocopa carpenter bee males can appear quite intimidating as they apparently ‘fly at you’ or 'follow you'.

Male carpenter bees (Xylocopa) typically fly toward (or ‘at’) any sign of activity to investigate the possibility of threat, and because they are territorial.  However, it’s all bravado, because the male carpenter bee is unable to sting!

For those unfamiliar with Xylocopa species, this is a relatively large species of solitary bee, which is sometimes mistaken for a bumble bee.

Do All Bumble Bee Species Sting?

This bumble bee is more interested in foraging on sea holly than stinging anyone!

Yes, as far as I am aware, all species of female bumble bees can sting, including the queens.  However, bumble bees are rarely aggressive and unlikely to sting unless ‘provoked’.

If you accidentally step on one, or try to handle a bumble bee too clumsily, it will probably sting you.

Bumble bees buzz frantically, and/or may raise a middle leg when they feel threatened, however, a sting is perfectly possible without such warning.

Do All Honey Bees Sting?

Again, as with bumble bees, females of all species are able to sting, males (drones) cannot, and as long as they are left alone to forage on flowers, a stinging incident is unlikely. 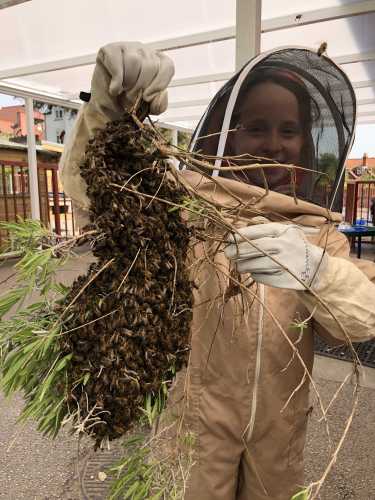 A child with a swarm of honey bees

The above photograph of a child with a swarm of honey bees appears on my page covering a story about beekeeping in a school.

Whilst a swarm of bees may appear intimidating, usually, they will be ‘drunk’ on honey because they fill up their honey stomachs before swarming.  Swarming honey bees are not so interested in stinging you as they are in finding a new nest site for the colony.

However, you should keep a safe distance from a honey bee swarm, and certainly to do not provoke or throw objects at the bees. 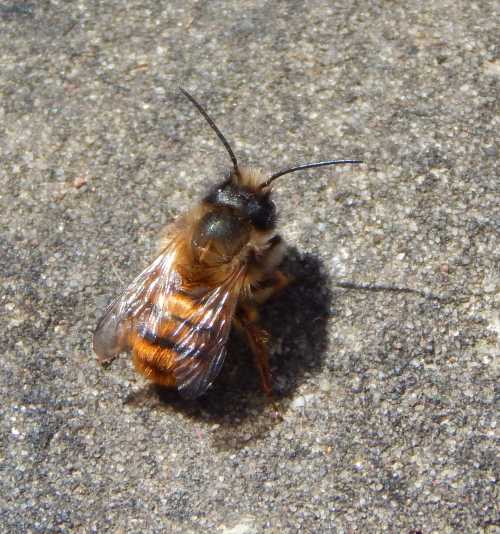 There are many solitary bee species, but stings are quite rare from the most common species (such as mason bees, mining bees and leafcutters), even when the species possesses a stinger.

In 2019, an entomologist called Justin O Schmidt conducted a piece of research in which he graded the stings of 78 species of insect in terms of pain and toxicity level, and 18 of those species were bees.  The most painful of the bee stings came from a tropical large carpenter bee, but most solitary species barely registered on the pain index.

How To Avoid Bee Stings: 5 Simple Steps You Can Take

You can avoid bee stings by taking a few sensible precautions.  For example:

Note: If you have an allergy to bee stings, then you should carry an Epi-pen with you, and avoid handling bees.

I have handled many bee species, always very gently and respectfully, and usually when performing rescues (I never handle them for the sake of it, or for my entertainment).  I have never been stung, apart from once, as a child, when I clumsily tried to pick up a bumble bee.

I state this not to encourage people to handle bees, but to emphasize that I have never witnessed aggressive bees.


Can Bees Sting Other Bees?


How to prevent bee and wasp stings