Carpenter Bee Eggs - FAQS About The Eggs Of Xylocopa

Carpenter bees (Xylocopa), are renowned for their large eggs, but you may have a number of questions, such as how large are they, and how many eggs do carpenter bees lay?

Read on for scientific answers to frequently asked questions about carpenter bee eggs.

How Large Are Carpenter Bee Eggs?

We can get an idea about the size of carpenter bee eggs from records gathered by Italian biologist, Professor Salvatore Vicidomini.  Vicidomini searched the published data for recorded egg sizes, and summarised the records of 12 Xylocopa species (carpenter bees). The information was published as Chapter 40 in The Book Of Insect Records1 (Florida University), and I include the key measurements in the table below.

As can be noted from the data comparing the 12 carpenter bee species, the eggs of Xylocopa auripennis (Golden-winged Bamboo-Carpenter) are shown to be the largest, having the greatest diameter (3.0mm) and a length of 16.5mm.

"The eggs of Xylocopa auripennis are largest, because they have the greatest diameter (3.0mm) and a length (16.5mm) that is equalled only by X. latipes.

However, Iwata (1964) derived the egg dimensions for X. latipes (16.5 x 2.6) from measurements of a "near-mature ovarian egg" and suggested that future field observations may prove that X. latipes deposits the largest eggs."

The carpenter bee with the smallest eggs was Xylocopa olivieri, having an egg diameter of 1.7mm and length of 7.2mm. 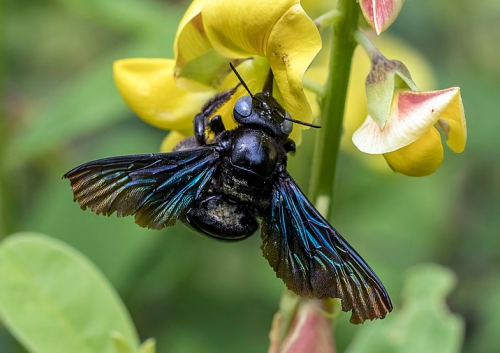 Do Carpenter Bees Have The Largest Eggs Of All Insects?

I once read that carpenter bees have the largest eggs of all insects.

However, comparisons can only be made on available records for those insects studied, which of course, will limit any potential examination of this question, and we ought also to include data for all Xylocopa species.

How 'largest egg' is to be judged is also a consideration.  For example, Vicidomini notes that relative to size of the mother, Xylocopa tranquebarorum has the largest egg from the table above, not Xylocopa auripennis.  He also stated that the insect producing the largest egg relative to its size is probably not a carpenter bee, and he draws attention to the large size of the single eggs from aphids, Phylloxera vastatrix and Pemphigus betae.

How Many Eggs Do Carpenter Bees Lay?

"7.35 eggs per female"
In a 1983 study2 of 15 carpenter bee species; 'Mortality, Sex Ratio and Fecundity in Natural Populations of Large Carpenter Bees (Xylocopa Spp.)' Watmough found that the average fecundity (ability to produce offspring) was 7.35 eggs per female.

He also found that parasites, predators and destruction by humans took its toll on offspring, resulting in 44% mortality (death).

"7.43 eggs per nest"
In his 1996 paper "Biology of Xylocopa violacea (Hymenoptera): in-nest ethology"3, Professor Vicidomini notes that fecundity of the violet carpenter, Xylocopa violacea ('as in all the other Xylocopa species') is low, stating:

"X. violacea is univoltine [producing one brood per season] and solitary, and as in all the other Xylocopa species, female average fecundity is very low (7.43 eggs per nest), despite considerable maternal investment."

My sincere thanks to Prof Salvatore Vicidomini for generously giving his permission for me to use the images below: 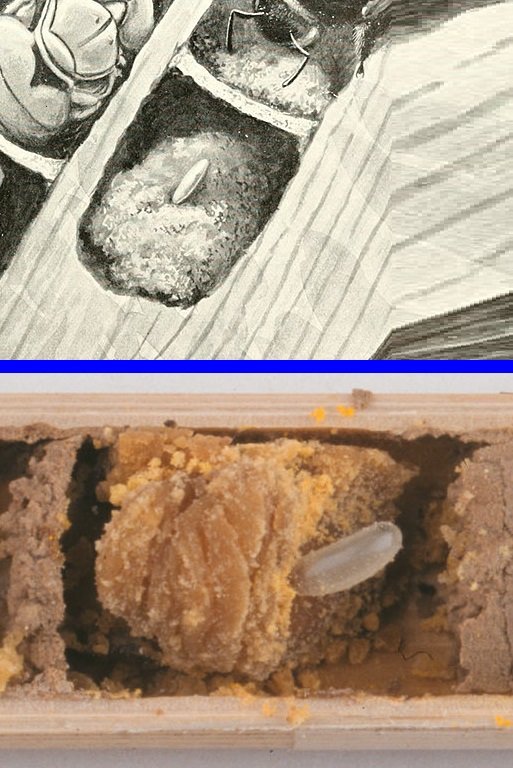 As can bee seen from the images in a further study by Vicidomini4 (concerning Xylocopa violacea), eggs have the appearance of a long, curved grain of rice (similar to honey bee eggs).

Inside a nest cell, eggs lie on top of the food mass (pollen paste) with one end raised.

On average, Vicidomini notes that male eggs are slightly shorter and fatter than female eggs.

I discovered photographs on a commercial image site which I found intriguing.

On the site, the image below is labelled  "Xylocopa valga on a large egg during metamorphosis" 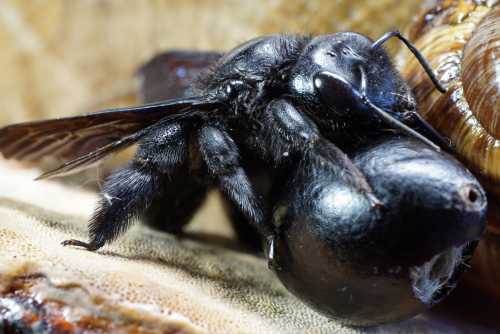 Is this really a Xylocopa valga with an egg? Apparently not!

Additionally, a further image is labelled as a "Caucasian bee carpenter Xylocopa valga with a clutch of two eggs" (you can see the dark shapes labelled "eggs", one in the background, and one to the right of the photograph below). 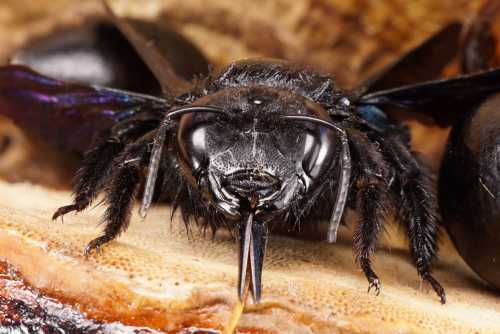 Is this a photograph of Xylocopa valga with 2 eggs at the rear? No, the 'eggs' are in fact cocoons of a parasitic wasp!

The photographs are, in my view, excellent.  However, I knew they could not be carpenter bee eggs, so what are they?

Fortunately, thanks to the kind assistance of Professor Salvatore Vicidomini, I now have the answer:  they are the large, dark cocoons of a Polochrum spp. that is, a parasitic wasp of large Apoidea!

Having conducted further research, I found a number of papers describing these cocoons, and confirming that Polochrum spp. do indeed target the nests of Xylocopa valga, among other Xylocopa species.

For example, one study by Hurd et al in 19615, provided an excellent description of the wasp cocoons, and outlined how they had puzzled researchers years ago:

"Historically, Gené (1844) was the first to discover this relationship. For several years...he had observed in the abandoned nests of Palearctic Xylocopa violacea....puzzling empty cocoons. The cocoons, ovoid in shape (6.5 x 17mm), were shiny black, rough and very thin walled."

Hurd et al then describe how Gené received two specimens of wasps of the species Polochrum repandum, together with their cocoons from Prof. Giammaria Zendrini at the University of Pavia, Italy, hence Gené was now able to solve the mystery of the ovoid cocoons.

Cocoons of the same wasp have been found in nests of Xylocopa violacea and Xylocopa vaga. Other Polochrum species across the world have been discovered in the nests of local Xylocopa species.

The Hurd et al paper also outlines how a further study (Parker et al, 1926) provided additional information about Polochrum wasps.  In the paper, Parker reasons that the Xylocopa offspring is killed by the wasp larva, and its food provision eaten by the parasite.

Following the destruction of the Xylocopa larva and consumption of its food, the wasp larva then forms a large dark cocoon (as can be seen in the images above) during the summer, where an adult wasp will develop.

Cocoons of Polochrum are usually partly shrouded in spun silk, and are anchored to nest cell walls by means of a tightly spun silken 'foot'.

Which Bees Can Buzz Pollinate?


Book Review:
The Bees In Your Backyard